A MOST PECULIAR CASE OF PANDO

Carmel Cafiero of WSVN  channel seven wields a rather sharp hatchet, which she does not hesitate to use on the subjects of her stories on the nightly newscast; the pieces are  edited with quick cuts, and dramatic music and graphics, all done in a manner designed to inflame the viewer against the subject of her story.


Enter Judge Pando of the County Court in Hialeah  and this story.


The Facts:
Florida Wellness and Rehabilitation Center is a corporation being sued in several cases before Judge Pando. 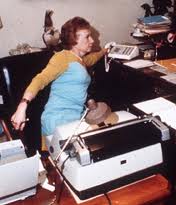 
Enter Judge Pando, who inexplicably (at the moment-perhaps the Judge will explain)   then wrote the secretary of state asking them to reinstate the corporation. The secretary of state did so and notated on the file "re-instated by court order." The secretary of state then went out and had a drink, having worked harder on this case in a few days then he/she has for the year so far.
Item: a month after the letter was sent, four separate Florida Wellness clinics contributed the maximum of $500.00 to Judge Pando's re-election campaign (the Judge is on the ballot with Barak Obama this fall).


The piece ends on a high note with clips from a 2005 video from the Florida Supreme Court issuing Judge Pando a public reprimand for some transgression during her prior campaign.


As always, we invite the Judge to respond by email with the assurance her response will be posted on the front page unedited and without snarky comments.
Posted by Rumpole at 9:19 PM
Email ThisBlogThis!Share to TwitterShare to FacebookShare to Pinterest
Labels: Judge Pando

get your facts straight please! Pando is not on any ballot until she has an opponent and the election is in August not November.

opponent or not, she seems willing to put herself in the fray...not good

pando has a good heart. Maybe she didnt think it through, maybe its not all that we see, Dont throw her to the curb just yet

Good to see this story coming out to the public eye.It was about time someone did something about this. Kudos whoever you are.

What's wrong with anonymous comment about no opponent? You sound a little bitter. Are you upset this story aired?

seems like she has had other ethic issues, maybe more to come

If Cafiero is correct, Pando's days are numbered, with the Judicial Qualifications Committee to take a rather dim view of the Judge's shenanigans. It's all right to be ignorant, stupid, or rude, but corrupt will get you booted by the JQC every time.

If I was bitter or upset about the story airing I would not have done a blog post.

Perhaps the end of football season has me more stressed out than I realized. 209 days to opening kickoff of the Dolphins.

First, the explanation is simple: It was Pando being Pando.

Second, 11:23 says she has a good heart. I'd disagree. So would all of the victims who stormed out of her courtroom when she was too busy doing God only knows what else to show up on time. Pando's biggest problem is that she thinks the black robes gave her carte blanche to do whatever she wanted/wants (ie. a bad case of black robe fever further exacerbated by the Supreme Court's failure to sanction her sufficiently for previous violations).

Third, assuming the allegations are true, there is NO WAY to excuse what happened here. EVERY agency, etc. pounds new hires about how inappropriate it is to use official stationary for non-offical reasons. Further, she used to work for the city so she of all people knows the rules. If any other judge did what Pando is accused of doing, I'd be amazed. But, this is her, so I'm not remotely surprised.

These are not some minor accusations...........they're alleging that (1) she used her power inapporpriately; (2) for the purpose of influencing a state agency; (3) on behalf of a party or parties appearing in front of her. ARE YOU KIDDING ME?!

6:48 your argument has merit. I think you are correct in saying that no one else in black would have done that. Who knows why or what really happened. The complainers do have an axe to grind. She does have a good heart.

Calypso singer: Once there was a judge named Pando

I have stationary that says "Real Fake Former Judge"

The ballad of the cobia said...

Calypso Singer: Once there was a lawyer named Kenny

Calypso Singer: He like to catch the fish in de sea

Calypso Singer: De fish he catch are Cobia you see

We don't need a good heart. We need fairness and equality.

I think it's fair to say I am an acknowledged world wide expert on legal ethics and the "go to judge " in the northern hemisphere when questions of legal ethics arise.
Why just last week I spoke at the greater Toronto Canadian Bar winter meeting on the topic of cell phones and judges- don't let this happen to you. And I can say to a legal certainty that Judge Pando overdosed on cuban coffee and black beans abd rice because as Nixon and I both said during a chat with Al Haig in the White House April 3, 1971 ( see the collected papers of Mr Justice Milton Hirsch, Vol 87, p. 456) never ever write on behalf of your friends on official stationary. Shes done.

OK I'll say it: It must be the PANDOmanium!

Seems that Pando has recused herself from all cases involving the clinics owned by the very rich chiropractor Mark Cereceda, owner of several chiropractic accident clinics that benefitted from her letter to the state to reinstate one of his corporations.

Also heard through the grapevine that she will have an opponent. It would be unrealistic not to expect a challenge against this judge. Would it be really difficult to find someone who is smarter and who isn't constantly having ethical lapses in judgment? Oh, and be on time to court at least once in a while?

I expect to see a ton of cash rolling in from the plaintiff attorneys that she consistently rules in favor of. They must save their golden cog in the wheel of the machine that rips off insurance companies and in the end the people of the state. Let's not let questions of ethics get in the way of justice...ooops, I mean making money (not by talent but by favoritism).