THE CAPTAIN REPORTS:
(Thank you to Rumpole for permitting this to be reposted this afternoon. My apologies to our readers for posting two posts on the same feature - but there is a slightly different slant to my post. I also have posted some new information on Elections & JNC appointments below). 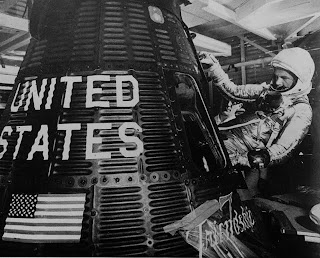 ..... Astronaut John Glenn climbed into his Friendship 7 space capsule atop an Atlas rocket at Cape Canaveral, blasted off, and became the first American to orbit the Earth.


Sometimes I think we forget about these monumental accomplishments in American history. Our children attending elementary, middle school and high school get little in the areas of history and civics. I would guess that if they were asked, "Who is John Glenn", less than 10% would have a clue. Sad state of our educational system, here in Florida, and all around the country. But our Republican presidential hopefuls will surely make the inability to obtain birth control a much higher priority than teaching about history or civics, if any of them are elected President this November.


And while we are talking politics, did you happen to read your local newspaper this weekend? The Herald invited former justice of the Florida Supreme Court Raoul Cantero and Mark Schlakman, a senior program director for the Center for the Advancement of Human Rights at FSU to write an OP ED about the Death Penalty.


The piece is entitled "Unanimous Jury Verdict A Must For Florida's Justice System". It is well written and it is speaking to deaf ears if it was meant to reach most of our elected legislators in Tallahassee. While they spend their time this session giving tax breaks to businesses that hire only non-union workers and redraw the geographic lines for the next decade of voting districts to make them "fairer", they ignore the two simple facts that speak loud and clear on this issue:


1. Of the 33 death penalty states, Florida is the only one that does not require unanimous verdicts. Even Georgia and Texas demand a 12-0 vote.


2. Since 1973, Florida leads the country in reversing more death sentences than any other state.


You can read the entire Op Ed here:

On the Election & Appointment news of the day:

The JNC has received applications from 16 attorneys and three County Court Judges for the open seat of Judge Julio Jimenez. The shock is from who is NOT on the list. After applying for what must have been a dozen or more times, and being nominated by the JNC to the Governor's office a dozen or more times, Judge Deborah White-Labora has not applied for this seat. Judge White-Labora told me last month that she was done, for now, applying, if she did not get the appointment that recently went to Richard Hersch. Can you blame her?!

Also missing from the applicants: Miguel de la O, who was another one of the six finalists in the Hersch group from last month. De la O is currently a candidate for Circuit Court Judge running against Greer Elaine Wallace in Group 42.

Now we know why the republicans are talking about condoms.

Please dear God not Fajardo she is the anti Christ!

Yeah, because they are fucked.

Why would they teach about John Glenn, Mercury or NASA; it aint on the FCAT ,so they dont need to know it nor teach it.
If you have a kid in Public School you would know that the` Republicans made the FCAT test the alpha & omega of Public Ed . UNLIKE when Teachers n those actually trained in education made education policys.
DS

Captain who is Greer Elaine Wallace? Do you mean Elaine Wallace Greer? Either way, who is she????????? Someone else has to get in that race!