"WE ONLY KILL BLACK PEOPLE"


Posted by Rumpole at 1:49 PM 5 comments:
Email ThisBlogThis!Share to TwitterShare to FacebookShare to Pinterest

THE QUALITY OF MERCY

Rumpole's Trial Lessons: #12: Always have a good quote memorized.
A good trial lawyer has a bag of quotes ready to go at a moment's notice.
For example:
"Injustice anywhere is injustice everywhere."
Dr. MLK.
Today's topic is "Mercy".
The quality of mercy is not strain'd,
It droppeth as the gentle rain from heaven
Upon the place beneath: it is twice blest;
It blesseth him that gives and him that takes:
'Tis mightiest in the mightiest: it becomes
The throned monarch better than his crown;
His sceptre shows the force of temporal power,
The attribute to awe and majesty,
Wherein doth sit the dread and fear of kings;
But mercy is above this sceptred sway;
It is enthroned in the hearts of kings,
It is an attribute to God himself;
And earthly power doth then show likest God's
When mercy seasons justice. Therefore, Jew,
Though justice be thy plea, consider this,
That, in the course of justice, none of us
Should see salvation: we do pray for mercy;
And that same prayer doth teach us all to render
The deeds of mercy. I have spoke thus much
To mitigate the justice of thy plea;
Which if thou follow, this strict court of Venice
Must needs give sentence 'gainst the merchant there.
Portia's Mercy Speech, The Merchant of Venice.
We are in the position we are in today- in the area of criminal justice- because of the publicity driven and ill-advised political movement of the 1980's to abolish parole and remove sentencing discretion from judges.
Shouldn't a 20 year old sentenced to life have the ability to have his sentence reviewed in 10, or 20, or 30 years? Some people can change. Prisoner's need some hope and some incentive to behave and rehabilitate.
#Bringparoleback
From Occupied America, where the president is next considering pardoning* Ted Bundy and Stalin next, Fight the Power.
* When asked about his pardon of the sadist Joe Arpaio, the current president referenced the "pardon of Chelsea Manning" by Obama and the unfair prosecution of Arpaio by the Obama administration and that Arpaio was innocent.
Wrong. Wrong. And constitutionally wrong.
Obama "commuted" the sentence of Manning. She -like Scooter Libby who President Bush gave a commutation to- remains convicted of her crimes.
The prosecutors who obtained the conviction of Arpaio were in the Justice Department under Jeff "Don't Fire Me" Sessions.
According to the Supreme Court, a pardon requires the receiver of the pardon to admit guilt.
Posted by Rumpole at 11:08 AM 14 comments:
Email ThisBlogThis!Share to TwitterShare to FacebookShare to Pinterest
Labels: Mercy

THE DREAM AND THE nightmare


"I still have a dream, a dream deeply rooted in the American dream – one day this nation will rise up and live up to its creed, "We hold these truths to be self evident: that all men are created equal." I have a dream..."

Dreams are sometimes interrupted by nightmares. But it is the dream that we remember. It is the dream that drives us and unites us and makes us a shining light for all the world. History remembers those who dream. Those who cause nightmares are destined for the ash pile of history. From Occupied America- DREAM.

Posted by Rumpole at 8:27 AM 1 comment:
Email ThisBlogThis!Share to TwitterShare to FacebookShare to Pinterest
Labels: I have a dream

Being the pugilistic purists that we are, and expert historians of the sweet science (nobody but us knows who Tunney Morgan Hunascker is without googling the name) we don't think Mr. McGregor has a puncher's chance. Ernie Holmes he is not.

Floyd Mayweather is not just a pro, and not just a champ, he is a top ten all time. At 49-0 her has tied the hallowed record of the real Rocky- Marciano, and at 50-0 he will surpass it.

From Las Vegas Nevada, fight! And fight the power.


Posted by Rumpole at 7:00 PM 3 comments:
Email ThisBlogThis!Share to TwitterShare to FacebookShare to Pinterest

LOOK AT THE ECLIPSE PART TWO

The Eclipse continues to affect America and Americans, including one frustrated FBI agent as this order written by US District Court Judge Merryday illustrates in a very Judge"Milt Hirschish" way.
Meanwhile, you thought our post the other day about President Trump telling people it was OK to look at the eclipse was a parody? Ahh...the truth is stranger than the presidency. See below.

Eclipse Order by Rumpole21 on Scribd


We told you the President said it was OK to look at the eclipse. At least he put his money where his eyes were: 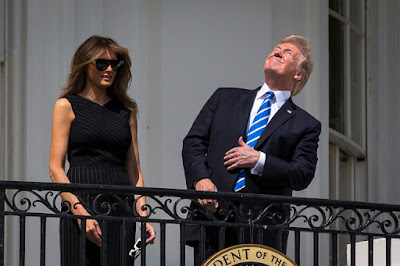 And the NY Times reported on the story we broke, here- that the President looked at the eclipse and urged all americans to do the same.

Happy 10th Birthday to # (the hastag) in social media. We were one of the first to use #, as in #bestblogever.

From Occupied America, where freedom is being eclipsed, Fight the blind power!

Posted by Rumpole at 3:30 AM 19 comments:
Email ThisBlogThis!Share to TwitterShare to FacebookShare to Pinterest
Labels: Eclipse

JUDGE RODRIGUEZ-CHOMAT HAS PASSED AWAY

Judge Rodriguez-Chomat, who spent about a decade on the bench at the REGJB has passed away.

We didn't know him very well, but his reputation was one of a kind, caring, and decent man and dedicated Judge.

Like so many of his colleagues on the Miami bench, Judge Rodriguez-Chomat's story is one of an immigrant from Cuba whose family came here seeking a better life.


Here is the Herald obit, which recalled the contretemps that erupted when he gave a defendant thirty days for giving him the finger during bond hearings. Here's the well superbly written post in which we reported on the incident.

The Funeral is Tuesday.
Posted by Rumpole at 8:27 PM 19 comments:
Email ThisBlogThis!Share to TwitterShare to FacebookShare to Pinterest
Labels: Judge Rodriguez-Chomat

STARE AT THE ECLIPSE

And other sayings from our President.

"Nazis are people too. Americans."

"We spend all this money on nuclear weapons and don't use them. What good are they? Harry Truman used nuclear weapons. Great American Republican President. He had the right idea."

"Robert E. Lee was a Republican. So was Stonewall Jackson. That's why the Obama crowd wants to take down their statutes."

"Lincoln didn't believe in global warming. Neither did Patton. Neither do I."

"Exercise is bad for you."

Posted by Rumpole at 8:22 PM 8 comments:
Email ThisBlogThis!Share to TwitterShare to FacebookShare to Pinterest

AND YOUR TWO NEW COUNTY COURT JUDGES ARE:

JOSEPH MANSFIELD, Age 52.  Joe has served as an ASA since 2001.  He fills the vacancy created by Judge Victoria del Pino who was elevated to the Circuit Court.

RENATHA FRANCIS, Age 39. She is currently with Shutts & Bowen. She was previously employed by the First DCA as an attorney to Judge Scott Makar, a staff attorney, and a law clerk to Judge Peter Webster. She fills the vacancy created when Judge Jason Dimitris was elevated to the Circuit Court.

FIVE NEW JUDGES COMING TO A COURTROM NEAR YOU ......

AND YOUR NEXT CIRCUIT COURT JUDGE ......

Will be selected by Governor Rick Scott from among the below names. With the elevation of Judge Norma Lindsey to the 3rd DCA and the retirement of Judge Gisela Cardonne Ely, there are two open seats on the Circuit Court. The Eleventh Circuit JNC has met and nominated a total of 12 names to the Governor - he will choose two of those as our next Circuit Court Judges.

AND YOUR NEXT COUNTY COURT JUDGE ....

Will be selected by Governor Scott from among the below names. With the elevation of County Court Judges Victoria del Pino and Jason Dimitris, there are two open seats on the County Court. Governor Scott has had 12 nominee names on his desk since June 16th and he is expected to name two new Judges on Friday, August 11th, or at the latest by early next week.

With the elevation of Judge Lourdes Simon to the Circuit Court, the JNC is now accepting applications for an open seat on the County Court. Please make sure to get your application filed before the deadline of August 24, 2017 to JNC Chair Luis Suarez, (lsuarez@bsfllp.com).

He was a US Marine.
He fought in Korea at the infamous and hellish Chosin Reservoir battle against the Chinese in the brutal korean winter of 1950.
He was a prolific author of pulp-fiction short stories.
He knew his way around a bar and a courtroom and he had clients lining up top hire him. No checks please. Just cash.
Every client was "a poor innocent child" upon which disaster had fallen.
If he liked you, he added "darling" to your name when he saw you.
Clients with multiple arrests while on bond were, to him, "a clear pattern of police harassment."
His arms were often splayed out as he pled his case.
He tried at least a case a week for probably forty years, maybe more.
He was an REGJB original and his likes will not again be seen in our building.
He died today, August 7, in 2007 and it doesn't seem like he has been gone ten years.
Rest in peace old friend Sy Gaer.

Here's the link to the great article about Sy by the former herald ace Susannah Nesmith. It's worth a second read.

Talk amongst yourselves quietly and nicely.

From free Europe, where Global Warming is real, fight the heat and the power!
Posted by Rumpole at 7:23 AM 6 comments:
Email ThisBlogThis!Share to TwitterShare to FacebookShare to Pinterest

It rained in Miami this week. Which means, naturally, that one of our courthouses flooded. But it wasn't the asbestos addled  dinosaur at 73 West Flagler Street (Motto: "A support beam in every courtroom obstructing your view since 1935"), but one of our newer courthouses- the Family Law center where everyday divorces and domestic violence injunctions are bandied about like so much hoo-haa.

So what does this mean for you, you may ask?
Carry an umbrella, replies Rumpole.
And read this email and govern yourself accordingly:

The Lawson E. Thomas Courthouse Center, located at 175 NW 1st Avenue, was evacuated and closed on Tuesday afternoon, August 1st, due to flooding from a roof drain impacted by significant rain. The building will remain closed on Wednesday, August 2, 2017, for repairs.

All hearings scheduled for Wednesday, August 2nd, will be re-scheduled and parties will be notified accordingly.

What you may ask, could even be more bad news that that? Steady yourself.

The clerk's office on the 9th floor has ....REMOVED the copy machine. No soup for you. No copies of a-forms and discovery and such for you.

But Rumpole, you may ask, doesn't this mean that the files will be available on-line?

Surely you jest dear reader.  Stop reading fake news. The clerk's office just upgraded their dial-up modem for AOL, although it's still powered by a couple of gerbils on a wheel in a cage. And monitored by a guy named "Al".

From Occupied America, where Miami Beach floods when it rains, but sea levels aren't rising, and the globe isn't warmer, and part of the Antarctic ice-shelf  didn't recently break away, carry and umbrella and Fight The Power!