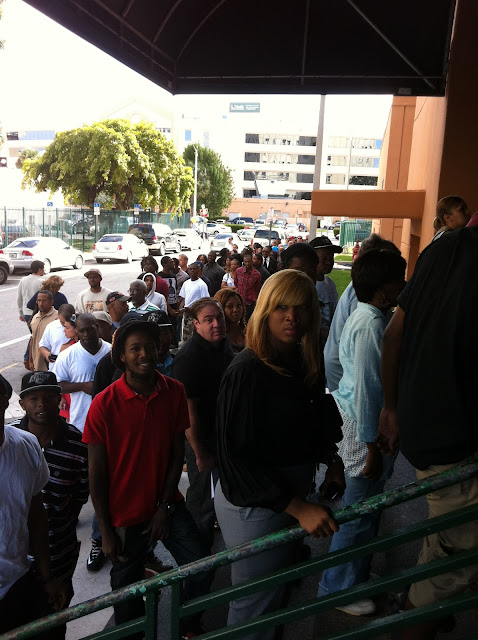 This was the distressing scene outside the rear of the REGJB Tuesday morning as crowds jammed and overwhelmed the aging facility we who labor there call home.
(Thanks to the alert reader/attorney who snapped this picture before heading into the building. If more readers would email us pictures of problems, we be able to spend less time thinking about what to write.)


The problem with courthouse lines is that it lessens the public's confidence in the court system. For a country that prides itself on giving everyone "access" to the courts, in Miami criminal courts, no one really has "access" when it takes 75-90 minutes to get into the damn building.


What can Brown do for you?


See you in the building no one can get in to.
Posted by Rumpole at 10:00 AM
Email ThisBlogThis!Share to TwitterShare to FacebookShare to Pinterest

And the fucking cops had the entire lot 26 jammed again so that lawyers couldn't get to court... the lawyers who pay $90.00/month to use that lot.

Where is Bertie Soto when we need her? (This is not to be construed as an insult to Bertie)

I have an idea. How about having a rotating judge list for lot 26 duty. Each judge has to take a morning and stand in front of lot 26, in his or her robe and adjudicate who can get into the fucking lot. Paying customers come first. Cops last.

And this holiday they did hold up the agreement to not have any infraction court on tuesday morning. Could you imagine what it wouldve been like if they had several courtrooms of infractions going on?

Well, what's up with Faber/Pando story???? You big tease.

I guess it is kind of like flying, get there 2 hours prior to "departure."

Good Humor Truck should drive by-- he'd make a killing selling frozen treats to all those waiting in line.

Wish I could call the Shumie and book out and grab a beer at Monty's. Hey- if you take the day off and go fishing is that Kenny Time? Pulling a Kenny? Call the kenny? Or does that all involve bribing maitre'ds so you dont waiti in line. Can I get a ruling on that?

essential reading from inside the jury: http://www.fcpaprofessor.com/a-guest-post-from-the-africa-sting-jury-foreman

What has Faber done now?

I love having the attorney's line in the back of the courthouse.

But if there is nobody using that line, they should let some of the other people use it. Instead, the two security guards just look into space while 10,000 people try to get in the other line.

Hi, I'm Kenny. And I'm Shumie. And we are here with Alan and Chris to take you in an adventure trip to Shumken World!

When I got here today, Wednesday, at 8:30 there was a city parking employee at the entrance, like he is every morning.

Anyone who has been around more than six months knows that the day after a holiday is very busy. Any lawyer that did not plan ahead to get here early is just a moron.

No doubt the lines to get in are out of hand, but it does not help that defendants take no initiative to get here on time, which in my book means 15 minutes early- minimum.

God I hate every one of them.

They intend to open up the second back metal detector to citizens once attorney I.D's are issued. That will speed up entry but screw those members of the bar that did not obtain their I.D. card.

I thought in a legal context "The Honorable" is reserved for current and former judges?

Lesson #1 No call or texts nor emails esspecially if you are an elected Official. The Herald reports that Miami Beach House Rep. Steinberg under investigation for bizarre texts. In the David Ovalle story , "The former Miami Beach commissioner admits to sending ‘inappropriate’ text messages to a married federal prosecutor.

The dozens of messages, sent over the course of more than three months last fall, were sent from a phone that used software to disguise the number. The victim, an Assistant U.S. Attorney. , repeatedly begged the anonymous texter to leave her alone."The Secret Service caught up to him and he fessed up.

'"I acknowledge and take full responsibility for sending inappropriate and unsolicited messages to Mrs. M. F.K. whom I have known for more than 15 years. I deeply regret and wholeheartedly apologize for the disrespect that I have shown her, her husband and my constituents,” he said through a spokesman.

“Most importantly, words cannot express how sorry I am to my wife, for the disrespect I have shown her, and my entire family.”'

7:37 PM--I honestly don't give a fuck as to what you call the State Attorney, Public Defender or "regular" judges. However, you must refer to me as Your Most Esteemed Excellency Mr. Chief Justice-Designate Milton Hirsch.

Have you met KFR or Martinez?

Nobody gets called "Honorable" by me unless they deserve it, so...

Does anyone know when Chief Judge Brown is up for election? If so, please post it. Thanks.

The reason I posited the question about how to address the SA and PD is that on Jacci Seskin's website, she addresses her former and current employers as "Honorable."

Does not seem right to me, and can't recall these people ever being addressed in such a way.

Now I realize she has never actually been in front of a Judge for anything other than a misdemeanor report calendar 9 years ago, but I would think anyone running for Judge would know that it is enough to simply call them "State Attorney" or "Public Defender."

Like many readers of this blog, I have met Kathy Rundle and Carlos Martinez and they really are "honorable" people.

Most agree with me.

Listen all you idiots: the judges have NO control over the city of Miami parking lot and they aren't a valet service. Get there early and stop your fucking whining. They shouldn't even have to worry about setting infractions on tiesdays after a Monday holiday. Screw you, get up early and get there early. And do what I do-tell your stupid clients to get there early. You're a lawyer. It doesn't make you royalty.

As usual, you have completely missed the point.

I never said they were not honorable people. If it is your subjective view that they are, so be it.

The point was about using the word "Honorable" as part of their title. The word was not used in that context as an adjective. None of the others named on the website were named and preceded with a description of their character; ie: the Dynamic Joe Blow, or the Promiscuous Jane Doe.

To say that they were listed as "The Honorable" because they are is just ridiculous.

But small mistakes like that aside, Seskin has no business even thinking about sitting on the bench. She does not have the credentials, the skills, the smarts, nor the respect of her peers.

Officials elected to office are recognized by the use of the courtesy title The Honorable.
Look it up,

I did look it up. As I thought, SOME elected local officials, for example a Mayor, are addressed by the title "The Honorable."

I found nothing that says a State Attorney or Public Defender of a county in any state receive this title.

It does not really matter. As long as a few people see this, realize Seskin is running for Judge, and they then do everything than can to oppose this disaster, we will all be better off.