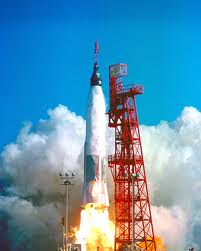 IT'S FAT TUESDAY and we will be having pancakes for dinner (but lunch at Irene's) The Captain's take on John Glenn is coming and w are happy to report Maya Angelou is out of the hospital.


"Godspeed John Glenn". With those words, said fifty years ago Monday, the United States entered the space race for real as Glenn became the first American in orbit.  For further reading on the first seven American astronauts (The Mercury Seven), you can do no better than Thomas Wolfe's  "The Right Stuff."

We've been thinking a lot lately about "American Exceptionalism" and the fact that there is no such thing. If you think there is, try flying in a plane built by people who brag about American Execptionalism instead of by qualified engineers. Americans have done exceptional things. Indeed we have saved the world from tyranny. Multiple times. But you can't spend money already spent. Each challenge must be met by that generation and merely prattling about how good you were last week or last century gets you nothing. We personally like nothing more than kicking the butt of the lawyer who tells us they've never lost a case, because their record means nothing in the current case.
As we think about John Glenn's remarkable achievement, we wonder where all the criticism is? Glenn was launched into space by NASA- a taxpayer funded agency. We don't see anything in the Constitution about space or NASA.  NASA created the rockets that launched the space capsules through partnerships with hundreds of small companies and several large contractors. And it wasn't the idea of American Execptionalism that created the rockets and capsules. It was exceptional Americans that got us into space and to the moon and safely back, except for the brave men of Apollo One.
An individual company on their own or even in concert with others could not have afforded the billions of dollars it cost to land a man on the moon by the end of the decade and bring him safely home. And what profit was there in creating the lunar lander or the Friendship Seven or the Gemini and Apollo series of space crafts? Without a partnership between the Government and private industry we all would have been going to sleep-in the words of Lyndon Johnson- by the light of a communist moon.
Yet in the current environment such promotion  of governmental partnerships gets you called a "socialist" or worse by the Republicans. Yet strangely we don't hear anyone criticizing Eisenhower or Kennedy or  Johnson or  Nixon (that's two Republicans and two Democrats for those of you counting at home) for creating NASA and spending billions of tax payer money landing men on the moon. Why the silence? It's deafening- and there's nothing exceptional about that.
Coming soon: "Pando and the Faber Effect. "
Posted by Rumpole at 8:54 PM
Email ThisBlogThis!Share to TwitterShare to FacebookShare to Pinterest
Labels: John Glenn

Great minds do think alike. And it appears that we were both writing about the exact same subject - at the exact same time. When I didn't see anything posted by Horace on this historic day, I got pen to paper, (so to speak) and posted about it.

Now, if you want to read about the 50th anniversary of John Glenn's historic flight, and about the death penalty, and about the history of President's Day - all tied into our educational system - you will have to scroll down and see my post which appears just below Rumpole's post.

Maybe, if Horace is nice and understanding, he will let me repost my post tomorrow so more of our readers can absorb the content.

I pulled the post and will repost with some new Election & JNC information Tuesday afternoon.

Thanks for your understanding and great post by Rumpole today.

"@ 5:23-- What does legalization have to do with First Amendment rights?
Good G-d sir! That is like asking what does the Bill of Rights have to do with the Constitution?"


Are you suggesting the gubmint could not restrict or even ban most forms of advertising of this product?

I've never heard an opponent of legalization shriek "But they'll have the right to advertise!!!".

It's a tangential, to the point of irrelevant, issue.

636..............YES, that's exactly what we're saying. The First Amendment restricts the government's ability to control speech (did you go to law school or are you just following our blog?). And, whatever regulations the government can/will impose would be highly ineffective (as we've seen with alcohol).

The reason you haven't seen this argument before (even though it's been made) is because legalizers like Soros are controlling the debate with their $$$$$$$$ and misleading arguments for "medical" marijuana.

Saturday's Fred Grimm Herald column on the Mercury Project was very good. Those of us who were kids in the cold war remember sitting around the TV watching Cronkite and Dr. Clarke waiting for a hopefully successfull launch.
DS

Here is the link to Grimm's comments:

50-year anniversary of John Glenn’s mission around the Earth

Half a century ago, John Glenn circled the earth in a space capsule named Friendship 7 and restored a bit of American confidence

Go today or Wed, or any court day, look in several Felony courtrooms . There will be a hand full in Every Felony Court locked up or accused of nothing more than possession.

Sorry but I see it wrong is so many ways , from practical to philosophical, From John Stuart Mills to BF Skinner to Tim Leary.

Its wrong to Criminalize personal use and possession. To Turn a Man into a felon to protect him from his intoxicant, makes NO sense.

I am NOT suggesting that it be LEGAL TO SELL, or Distribute without a script , only LEGAL to Use, Possess and Grow small amounts for personal use.

But hydroponic labs are the Tea Parties small business model.

If you don't follow us on twitter, and despite what some legal commentators opine, you should- you missed the re-tweet of the quote from DSK's attorney. DSK is back in trouble with a prostitution investigation in France, and his attorney was quoted as saying something like "explain to me the difference between a naked woman and a naked prostitute?"

Great quote, and that DSK is some rascal.

The good news for DSK is that having already done hard time at Rikers, being held by french authorities for 48s is like a weekend at the Ritz. The main problem with the French jail is that they serve the brie a bit colder and not at room temperature as it is made to be served. But hey- prison is rough.

To BTDT:
What I believe this person is trying to say is that if marijuana is legalized, then it may or may not be advertised in whatever forum the governement deems appropriate. So what?

How does that affect the public policy question of whether it should be legalized?

Upon legalization, the legislative policy determination has already been made that possession and its concomitant partners sale and purchase are not sufficiently deleterious to the public good for the item to be outlawed. (Just like alcohol.) So how does the fact that it may be (or may not be) advertised after legalization affect that initial policy determination?

Those who wish it to be legalized inevitably make the comparison to alcohol. The focus of whether any mind/mood-alterating substance should be made legally available to the public does not, to my knowledge, center on whether its legal availability can thereafter be made known to the public.

The reason it's important is because advertising/marketing would adjust social mores/normalize use and result in dramatically increased usage.

Your comment though is a great rebuttal to DS's comment (though I know it wasn't intended that way). Once drugs become illegal, it would be almost impossible to limit their sale in any substantial way (can you think of any other products that are legal to have and use but not sell? There are very few and they're usually legal to posessess only because they are "grandfathered in" or something akin to that).