Prime Minister Trudeau of Canada just named a woman to Canada's Supreme Court.
Is it me, or do the Justices all look like Santa Claus? I mean, if you're Canada, and you're closer to the North Pole than the US, do you really want to dress your judges in Red Robes with white trim? Ho Ho Ho. 🎅 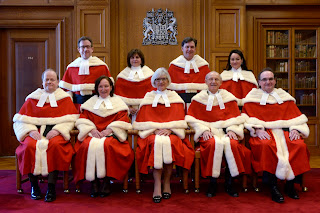 I'm going to miss Judge Ortiz. Rumpole reported Saturday that she has left the REGJB. She is such a class act. Always calm. Always knowledgeable and very fair.  Rumpole is loath to praise judges, but I am not and Judge Ortiz is a great one.

That new legal movie with Denzel Washington is a hot mess. It has no structure and its discombobulating. Skip it.

Everyone is buzzing about whether or not Cardona will testify. I can't wait and I'll be lurking around the courtroom. And I won't miss closings for sure. But if Cardona testifies, I don't think she will be as easy to cross as people think, even for a great lawyer like Mr. Reid Ruben.

Sometimes I really get into the mood for Italian food and then Miami disappoints. In New York or Chicago or Boston it seems like there's a good place every block or so. But in Miami we have to drive to a Carrabbas or something ridiculous and it stinks. And all of those places on Lincoln Road seem like rip-off joints. I hate walking down the street and being hustled by some woman in way- too-tight revealing clothes to walk into a restaurant. What are they thinking? Are they thinking that guys will eat there because they somehow believe that if they eat their the girl at the door will go out with them? Really?

I just watched the Ben Bradlee documentary this weekend.
JFK while president had an affair with Bradlee's sister in law and also made a pass at Bradlee's first wife.
Would the same democratic senators who forced Franken out have tried to impeach JFK?
Mary Pinchot Meyer was the woman JFK had an affair with. Her story is fascinating. She was married to a CIA officer. She was a serious artist. There is a JFK love letter to her, written on White House stationary that was kept by Evelyn Lincoln- Kennedy's secretary and auctioned a few years ago for $89,000.00.
Pinchot-Meyer was murdered while she was walking one day. A man was arrested for the murder and tried and found not guilty.
Her story is replete with late night rendezvous' with the President, and powerful CIA officers and an unsolved murder.

I am literally starving myself half the time to make up for the extra calories I am eating at these holiday parties which now seem to be happening every day. I'm not sure it's worth it, but I don't want to deal with the depression of not fitting into my tight jeans.

I am so caught up in this Cardona trial opera but I think it's proper that we all remind ourselves that an innocent little boy was killed and that is the real tragedy here.

Was anyone else offended that Rumpole called me "the chick" in his poll?
LOL- he did it after checking with me because he wanted to see if people would raise a fuss and no one did. 😜


Posted by Millennial Me at 8:30 AM
Email ThisBlogThis!Share to TwitterShare to FacebookShare to Pinterest

Franken "had his faults"? Lol.

Do you share the outrage that many Canadian liberals have that a women was appointed to the Canadian supreme court rather than an indigenous?

It should have been an indigenous dross-dressing transsexual

I know you are his favorite prosecutor. We know who you are.

Please stop. Your writing and opinions are horrible.

You have a Constitution handy, yes?

There is nothing there to suggest that the House or Senate can expel a member for conduct he engaged in before becoming a member. There is a reason for that.

The voters of Alabama know for whom they are voting. If they send Moore to the Senate, the Senate has no authority -- at least not any constitutional authority -- to deprive them of their choice, however benighted you or I or anyone else may view their choice. There is only the Constitution and it provides no basis for removing a sitting member except for cause that arises while seated.

Voters vote for bad guys all the time. Edwin Edwards ran for office on the slogan "Vote for the Crook, It's Important." He won -- and was arguably the better choice over the racist he opposed.

[See also, Marion Barry was returned to office by the voters despite a drug conviction. Hialeah voters have been similarly forgiving of mayoral candidates. Not exactly the same thing as governors can remove mayors and so on. The point being, voters vote for whom they will.]

MM what do you say about Jeff Cynamon for County Court Judge. He seems like a good candidate.

The Dixiecrats will come out in droves.
Roy Moore will win by 10 points.
Save your Dixie cups the South is riding again

9:20--you miss the most obvious and local character--Alcee.

MM, you are annoying

I agree with 9:20. Moore wins then he is the legitimate senator from Alabama and should not be removed. In fact he is as true a representative of present day Alabama as you can get. He is the very refection of Alabama values and character. Bible in one hand, his dick in the other and a bunch of teeny boppers to enjoy it. Roll tide.

The 2018 election cycle is here and still quite. The 2020 elections are around the corner and candidates are already thinking of challenging some of our Justice Building's finest. The names that have come up and suggested by one publisit are Jerri Beth Cohn, Richard Hersch and Dava Tunis.

You’re forgetting Migna! She is the worst judge in the county. Gives Peter Adrian a run for his money. Migna has pissed off so many civil lawyers these last three years, you know she will be going to be looking for a job come December next year. Bye bye Migna!

I disagree about Migna. Tunis for sure. Tunis has never run a campaign and made mistakes she has not realized. Suck up to the wrong people or Burn the wrong people and pay a price. You get blackballed, campaign funding and access to the political players is shut down. You are out of a job. Migna has learned. She makes a mistake she addresses it. Migna is not as arrogant as most think. Short on patience, but she tries. She works hard, makes an effort to be fair and do what’s right. Not everyone gets it right all the time. Give Migna a reasonable basis and she is not afraid to do what is fair. I have seen Migna on close calls reconsider rulings, express doubts and Solomonically change her ruling which is more than I can say for others.

Say what you will about Canadians/Canada but let it be known that Canada has the best tasting Poutine in the world & when it comes to sports, Hockey is where it's at. We own that sport.