IN THE BELLY OF THE BEAST

It takes a lot to turn down a plea offer of probation when facing decades in prison.
It takes courage and intestinal fortitude of another magnitude to turn down such a plea offer ana go to trial in Broward County, where punishing a defendant for going to trial isn't just a natural result, it's considered a sport  for the judges and prosecutors who work in Broward. They lurk in the shadows up there, like a Lion in the tall grass, just waiting to pounce on the unsuspecting lawyer/client foolish enough to go to trial.

But credit and congratulations are due to David O Markus and Bill Barzee who defended a client on multiple charges of aggravated battery and on Thursday were rewarded with a Not Guilty on all counts. Two very sweet words. The Sun Sentinel Article is here. 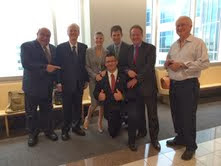 While David and Bill are superb lawyers, neither of them are old enough to remember the good old days in Broward when your client was rewarded with an acquittal with (we are not making this up) a revocation of their bond, and being remanded to custody, ostensibly to check for open warrants.  It happened to us, more than once. And the dialogue went something like this "The jury sir, having found you not guilty, I will adjudicate you not guilty. Congratulations. Your lawyer did a great job. The sheriff is directed to take the defendant into custody for processing. Have a nice day."

Eventually, Broward paid a few million dollars in a class action for incarcerating individuals who had just been acquitted (even when you read it, it's hard to believe they actually did it), which just caused a group of judges to revoke your client's bond the day before trial. And on and on it goes. Anyway, a hearty Well Done Mr. Markus and Mr. Barzee. Well Done Indeed!

Sean Taylor Murder Trial: Herald Ace David Ovalle has been tweeting all week the trial of Eric Rivera, the alleged shooter of Sean Taylor. There is no trial today and the rumor is the trial should wrap up next week.  Here's a tweet from this week:

Posted by Rumpole at 2:30 AM
Email ThisBlogThis!Share to TwitterShare to FacebookShare to Pinterest
Labels: Bill Barzee, Broward, David O Markus

why are you up so early?

That's not a big deal.

Broward always files ridiculous cases and the pit prosecutors are never given much discretion. The quality of lawyering can be pretty poor out of Satz's office. Acquittals are a dime a dozen in that court house. You are making Marcus/Barzee sound like demi-gods when the Broward SAO gets beat up all the time.

There are plenty of Miami, Palm Beach and Broward defense lawyers that thump that office every day but the don't do a victory dance like what's going on here.

6:19 am - true. Proof that Marcus/Barzee aren't that great can be seen in the photo. No class.

Not a big deal? Can't we just be happy for each other?

I guess I need a publicist.

The self promotion in this city is amazing.

Acquittals mean nothing! The defendant is still probably guilty! Jurors who acquit are stupid! Don't get your hopes up pizzi! I will keep writing articles to poison the jury pool. I miss the good old days and bond revocations after the jury failed to do its job.

Hey dipshit - a not guilty is always a big deal.

I wish to set the record straight .

I am a traditional journalist. Traditional like, Castro Cuba tradition. Tradition like all state controlled press. I am one sided for the state . But that's the way it should be because you now have liberal blogs trumpeting disgusting concepts like innocence and due process and acquittals . People deserve to go to jail. And you, you filty greedy defense attorneys - you're as guilty as your clients . I play you like cheap fiddles and suck information from you that you freely provide just to see your name in the paper even if I slime your clients and abuse your trust . It's almost noon so my day is done. And btw pizzi is GUILTY and markus' client was GUILTY!

total bull. There are acquittals everyday in Broward. Just cuz you don't have the balls to try a case in Broward doesn't mean the lawyers who work Broward every day don't. You can actually still practice criminal defense in Broward as opposed to the cattle calls in Dade. Not defending Satz, as it is true that the line prosecutors have minimal discretion, however, Going to trial is more common in Broward because, Satz doesn't have the clout he used to, period.

Fernando F. S. Rodrigues told the media / associated press:
1 - "On March 5th, 2012 my wife Stefanie Guimaraes and I were out to lunch when we were attacked by a duo of armed swimming pool workers looking for a roadside fight"
2 - "Despite this brutal and senseless act against us, I was blessed to ably and lawfully defend myself from two attempts on my life, but far more importantly, protect my beloved wife from harm."
3 - "All things considered, my wife Stefanie and I are very happy that Coral Springs Police & Broward County Prosecutor's overzealous campaign against us has been brought to a just end: my innocence and honor, fully intact, thanks to God and our Earthly heroes, Mr. David Oscar Markus, Mr. Bill Barzee, Mrs. Robin Kaplan and their entire legal team at Markus & Markus Law Firm, who championed our benign cause on our behalf."
4 - "Henceforth, alongside my wife Stefanie, who is also a U.S. Marine, we will continue to do our noble work in the private sector and in service to our United States Marine Corps. Semper Fidelis!"

PS.: SHAME ON YOU TROLLS WHO TOSSED ROCKS BEFORE HEARING THE TRUTH ABOVE ;-)

who is jay weaver?