DON'T TEXT FROM THE BENCH

Something about this story seems very familiar..... 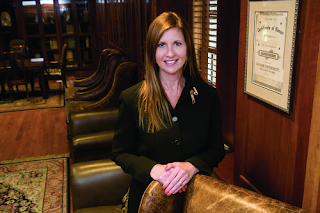 Texas district Judge Elizabeth E. Coker  (pictured above in her chambers in happier times) is stepping down from the bench after being caught engaging in misconduct.  A whistleblower revealed that Corker was sending text messages to prosecutors with suggestions on questions to ask in court in order to secure a conviction.  Coker was also accused of suggesting that a witness review a videotaped interview he gave to law enforcement to refresh his memory and rehabilitate his testimony and of discussing legal issues pertinent to the case "in an unsuccessful effort to assist the State (to) obtain a guilty verdict in the case."
The defendant ended up being acquitted of a felony charge of injury to a child.The Houston Chronicle article is  here y'all. (H/T to an alert Texas reader).

SEAN TAYLOR CASE: The prosecution rested Monday and the defense started their case, calling other individuals who were in the car with Eric Rivera when it was stopped and Rivera "voluntarily" decided to go to FDLE to confess. The defense also called the Defendant's father who testified about his putative attempts to located his son while he was in custody  was voluntarily confessing. The big question is whether the defendant will testify?  Either way, the case should conclude this week.
One thing's for certain: Judge Murphy is not texting Reid Ruben questions to ask on cross.

See you in court.
Posted by Rumpole at 7:06 AM
Email ThisBlogThis!Share to TwitterShare to FacebookShare to Pinterest

I have no problem making lots of little young girls judges as we do in both Texas and here in South Florida at an epidemic rate. Is it too much to ask that they be borderline competent and neutral at the very least?

is the Sean Taylor trial not being televised or streaming live on the web?

also, happy birthday to Richard Dreyfuss, who will play the part of a certain judge...

South Florida Judge most likely to do the same really dumb thing:

Jeff Levenson in Broward. Boy doe he do the State's job for them.

defendant repeats almost every question before answering on cross

That's because the defendant's lying.

She's a cutie but these pretzels are making me thirsty!

The jury wasn't buying it. No one was. Rivera's brain could not keep up with the questioning, he needed time to remember what he was supposed to say.