Oyez Oyez. Today is the first Monday in October. Hang on to your civil rights and keep a firm grip on the fourth and fifth amendments because friends, we're in a for a rough ride criminal defense wise.

Update: Here is the NY Times Article about this year's docket.

On the docket for arguments this week, we have some campaign finance coming your way with an hour of oral argument on Tuesday. What's that you say? The Federal Government is shut down? Not the Supreme Court, which is open for business regardless of what congress does or says.

Because it's Monday, and because we expect the news out of Washington DC to continue to be depressing, legal and otherwise, we continue with our series of Texts from a lawyer, with today's installment a series of texts between Lenny and his secretary Zoe: 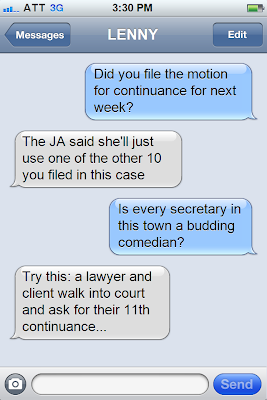 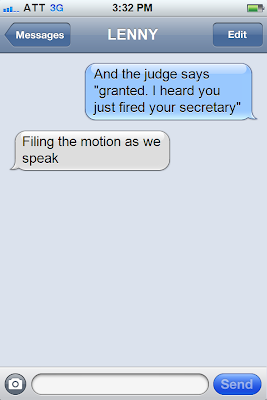 FOOTBALL: No one dropped out of the survivor pool Sunday, although DOM squeaked by with the Broncos with a late Romo INT and a Bronco FG. A few players have the Falcons over the Jets tonight so there's still a chance we lose some players. Otherwise this might be the first weekend in a long time with this many players and no one going out.
Picks wise- going into the late Sunday night game we were 5 for 5, giving you the winners in Bengals over the cheaters, Colts over Seahawks, Ravens over Fins plus the over 43 in the game, and the Cowboys at +7 who lost by three. In our picks we gave you the outright winners of two games where the undefeated teams (cheaters and Seahawks)  lost.  Our $ystem work$.
Posted by Rumpole at 3:00 AM
Email ThisBlogThis!Share to TwitterShare to FacebookShare to Pinterest
Labels: First Monday Of October, Texts From A Lawyer

Why is the suicide pool being called a survivor pool this year?