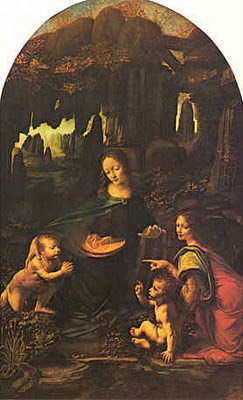 Fear not: for, behold, I bring you good tidings of great joy, which shall be to all people. For unto to you is born this day in the city of David a Savior, which is Christ the Lord.
Luke 2:10-12
The above picture is Da Vinci's Madonna of The Rocks or sometimes called The Virgin of the Rocks. The original painting is in the Louvre, while the charcoal sketch hangs in the London National Gallery of Art (our favourite museum bar none), along with a second painting. There is a controversy as to which painting came first, whether Da Vinici's assistants worked on the painting in the National Gallery, and whether Da Vinici was forced to alter the paintings. Wiki has a good article here on the paintings.
Merry Christmas.
Posted by Rumpole at 11:47 AM
Email ThisBlogThis!Share to TwitterShare to FacebookShare to Pinterest
Labels: Christmas

pave the way for the palestinian state baby

i support the ultra orthodox

Despite unusually inclement weather and with temperatures hovering around 40 degrees, thousands of Israelis gathered to protest against the increasingly extremist behavior of ultra-Orthodox Jews against women. Among the protesters were many ultra-Orthodox Jews themselves, frightened by fanatical tendencies that have sprung up in the community.

The current wave of anger followed an incident in which a secular 8-year old girl, Na’ama Margolese, an American immigrant, was filmed by TV cameras as she was attacked and spat upon by ultra-Orthodox men while walking to school in Beit Shemesh, the bedroom community nestled in green foothills between Tel Aviv and Jerusalem.