UPDATE # 2 The best words in our job: NOT GUILTY.
UPDATE THE TRIAL IS OVER WE TWEETED THE WHOLE THING. PD ROBERT VALDES KILLED IT IN CLOSING. A GREAT JOB. DURING THE VERDICT THE AUDIO WENT OUT. WE HAVE NO IDEA WHAT THE VERDICT WAS. STAND BY 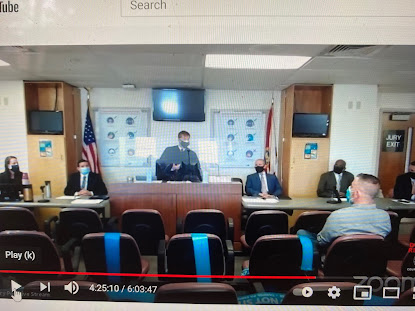 The trial that has transfixed the nation continues in Miami's REGJB today, with Judge De La O, at the end of jury selection on Monday telling the jury that the trial "will be over tomorrow" and then, in answering a juror's question, wisely responding "there is no time limit" on how long the jury can deliberate.

Can it get any more exciting than this?

An inside source tells us that openings are expected around 9:30 am. So brew that second cup of coffee and save that donut and sit back watch some real Mi-am-uh lawyerin this morning.

We will again be live-tweeting the proceedings @justicebuilding.  Follow us for insightful commentary you will not get anywhere else.

It's kind of interesting to consider putting a jury on the clock, like the NBA 24 second clock, but with more time depending upon the level of the crime. Say 150 minutes for 3rd degree felonies, 180 for second degree felonies, and so on. There would be a clock in the jury room and one in the courtroom and the participants could all count down to the final seconds. Each side would get a few time outs, with the lawyer standing up and dramatically putting their hands into a T before the judge, who would blow a whistle and order the clerk to stop the clock.

And if we are going to do all that, then we might as well take away Judges'* robes and put them in stripped shirts.

Because in ruling against us on Twitter in our epoch battle for the soul of the legal profession,  "Judge M" as he apparently doesn't mind being called, is along with  Mr. Markus's,  the foremost opponent of tradition in our profession. Of course we must admit we greatly admire Judge M's thinking outside of the box and conducting Jury selection in the jury pool room. It shows a clear preference for substance over form and an ability to do something different to protect everyone's health- precisely the type of thinking and judging we need these days to re-open the courts and keep everyone safe.

* In reviewing our post, we noticed the missing apostrophe designating possession in our original post. And since Judge Robert Watson has joined blog irregulars as our foremost critic of punctuation, we didn't want to receive a comment chastising and embarrassing us.

Posted by Rumpole at 8:57 AM
Email ThisBlogThis!Share to TwitterShare to FacebookShare to Pinterest
Labels: Judge De La O, Jury trials