If it's Monday in the REGIB, then it is time to try a case. Remember when? 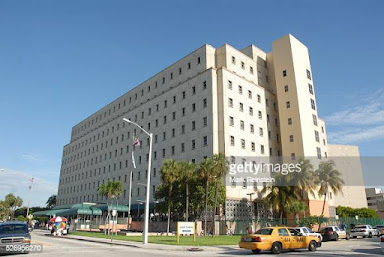 (Don't miss below where Judge De La O rules  against us in our battle against Mr. Markus).

Well today Judge De La O is finishing voir dire in an armed robbery case where defendant Odell Wadley  has been in custody for two years. Jurors were pre-qualified over zoom last week  and the final panel of 36  is heading -masks on please- to the REGJB to perform their public service in very trying times.  The good news? Parking will be a snap.

We have had the occasion to email with Judge De La O who has continually assured us that all participants, lawyers, the defendant and courtroom personnel have been made aware that this trial is taking place only because they feel safe and secure to proceed. No lawyer or other participant will be forced to trial in Miami if they have any health concerns, and this has been the policy since the beginning of the pandemic.

The prosecutors are  Casey (Double C) Corey  and Kevin Bentancourt. The defense is Robert Valdes and John  (JOA) Sullivan.  You can watch this extravaganza on the 11th Judicial Circuit's own CourtTV on You Tube.

It may not be Ali/Frazier I (see below), but we note that today is the 50th anniversary of the true fight of the century- the only time two undefeated heavyweight champions met for the title.

Has our new CJ thought about selling spots on the live stream? Along with announcers, we can turn this into something:

Gene: "Howard, there is a sidebar going on over presumably the prosecution's desire to use a picture of the crime scene in opening before it's been admitted."

Howard: "That's right Gene. It should be an easy call for De La O on this matter. Pictures are often used in opening by both sides.  But while we are on this break, the law firm of Dewey Cheetum and Howe wants you to know that when trials don't go the way you hoped they would, DC&H are available for immediate consultation for appeals and that includes an appellate bond."

What say you CJ Sayfie? Have we got an idea here or what?

Speaking of Judge De La O, he issued a decision on his twitter @delao that was a bitter pill for us:

. Comes now the Court to rule. You are a great lawyer, Rumpole. You put up a strong fight in a losing battle. O'Marcus is not only right, he made his case succinctly. You were more entertaining, but he wins handily.

Permit us to opine that perhaps his twitter handle should be @delanoideawhatheistalkingabout.....too long?

It is hard to convey to this Starbucks/millennial generation what Ali/Frazier I was. It was not just a sporting event. It was the greatest event in the greatest city in the world. It was all anyone could talk about for weeks before the fight.  Ali had previously lost his title when it was stripped from him because of his stance on the Vietnam war. Frazier was the champ, and in his own right he was a great great champion, boxer, athlete and man. That night was deservedly Frazier's night when he threw and landed perhaps the best left hook in the history of heavyweight championship fights. How Ali got up and finished the round is indeed a testament to his own greatness. How big was the event? Frank Sinatra was ringside as the photographer. Hollywood star Burt Lancaster was one of the announcers. A young Rumpole was left to scrimp and save twenty dollars to watch it in a movie theater on closed-circuit.

Watch the whole fight on You Tube when you have 100 minutes. The ebb and flow is breathtaking. Up to the start of the last round it was anybody's fight to win although Joe had staggered Ali on the ropes in the 11th. And then in the 15th  Joe showed why he is, like Ali, a champion for the ages. It is rare you get two men as great as these two at the same era in a sport. Each could not have been what he was without the other.

Posted by Rumpole at 5:30 AM
Email ThisBlogThis!Share to TwitterShare to FacebookShare to Pinterest
Labels: Judge De La O, Jury trials

You can see why Judge Sayfie is going to be our Chief Judge. Very smart of her to start the ace of her pitching staff. They don't come much better than Judge De La O. And she needs to use that pitching arm while she can. I hear he will be a free agent at the end of the season and the feds might make him a very rich offer.

I concur with Judge de la O. Also, why no apostrophe for "Let's" in the headline? And why a contraction for "it's Monday," but not one for "it is time" in the same sentence? And finally, why REGIB? Was that a sophisticated jab (I for injustice) or merely a typo?

I try to avoid contractions. I have an associate who edits my legal briefs who removes them all. But it is hard. I am (or I'm) not sure all the punctuation makes it into blog headlines. The platform, is, as we say in Piccadilly- wonky.

Thanks for reading judge. As to concurring with Judge De La O, take a lesson from your criminal calendar. Be careful who you hang out with. Friends can lead you astray. And even the best of judges get a case wrong every now and then. Do you really want lawyers calling you "Watson" in court, not standing when you walk in, and filing pleadings full of unpunctuated contractions?

Ali was not stripped of his title because of his stance on the war. He lost it because he refused to be inducted into the armed forces, claiming a religious exemption. He ultimately prevailed with the Supremes (Diana Ross, CJ., Concurring). It is almost impossible to overestimate the hoopla surrounding this fight. Anyone interested in American history should watch the fight. There will never be anything like it again.