Gerald Kogan passed away on Friday. He is known for being the former chief justice of the Florida Supreme Court, but he was so much more. We knew him as a Miami Dade Circuit Court judge, and then saw him frequently when he was retired. His lecturing against the inequalities of the death penalty was one of the standouts of his time in retirement. 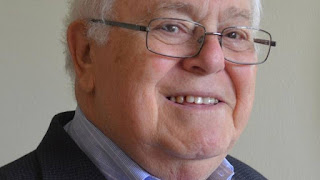 Trivia- At some point after leaving the Dade SAO, where he started as a State Attorney in 1960, he formed a firm: Kogan and Kogan. Who was the other Kogan?

Jack Blumenfeld, an REGJB and Miami legal legend in his own right, wrote us with this memory which says so much more than we can:

Rumpole, I’m sure that you will get many comments regarding the devastating loss of

Jerry Kogan. Most will come from young and not so young lawyers who practiced before

him on the Circuit Court and/or the Supreme Court. But, there are a few of us older

(guess ancients would be more accurate) who go back to the 60s and 70s with him.

I met him as a young ASA and tried many cases against him, especially as a Major Crimes

prosecutor handling murder cases. Unfailingly, he was brilliant. His closings made you

wonder if you would have voted NG if you were a juror, even when you knew the

defendant was guilty. But, he was also unfailingly a true and consummate professional.

He NEVER made it personal. He treated every lawyer-even

adversaries- with respect. That didn’t change when he took the bench either, as many can

attest. When I decided to leave the SAO, he invited me to practice with him and a year

later made me his first law partner; a junior partner for sure, though he never treated

me as anything but an equal. What an experience!! We got a young law clerk from

UM Law, who seemed to have some promise. His name: Alan Ross.

Can you imagine a better place to practice in those days?

More importantly, I knew him as a human and it was as a human that he excelled.

He was one of the most decent, honest and respectful person I have ever met.

Yes, he was a great lawyer and jurist, but, he should also be remembered as a great husband,

father, brother and friend. He just did life the right way.

Gerald Kogan made you proud you were a lawyer; especially proud to be a criminal defense

lawyer. And he made me thank G d for allowing me to know and associate with him.

Frankly, if we have displayed pictures of some of our colleagues who have left us,

we should dedicate the entire 4th floor in his name!!!

Well said Jack, and yes, his picture should be hanging in our beloved REGJB. All Judges in

the REGJB are measured against the great and brilliant Judge Cowart. Deservedly so.

has so eloquently written.

Posted by Rumpole at 11:00 AM
Email ThisBlogThis!Share to TwitterShare to FacebookShare to Pinterest
Labels: Gerald Kogan

That was Max KogEn

He was always genuine. Extraordinarily capable. Made a deep impression on the law. Always friendly. Rest in peace.

Gerald Kogan was a lawyer' lawyer and a judge's judge. One of the finest ever to come out of the Justice Building, together with the great, late Ed Cowart. I was honored watch him against Ed Carhart ( an awesome trial lawyer himself) in a major trial before Judge Cowart. Later, I was honored to appear before him as a circuit judge and later even argued an appeal in the Florida Supreme Court before him. He also served as a master on a fifth amendment issue in a civil case was proper. ( he said it was). The picture of Gaer should be replaced by a monument to Justice Kogan. A great lawyer, Judge and most important a person. Gerald and Max were a great team and were the "go to attorneys" if one was lucky enough to retain them. He will be missed.

Rump, as a very big fan, I have to ask you how It’s ok that the death of a greater than life figure like Justice Kogan gets 4 replies? I’m not a family member, or friend, but I grew up at the MJB (Now REGJB) and I’m very saddened that only 4 people saw the need to weigh in. I know I’m in the group who didn’t, but that doesn’t excuse it. How is this possible?

Gerald Kogan was a great trial judge, but more importantly, he was a man of integrity. His court was one I covered as a narcotics ASA in the 80's. He was no fan of the drug minimum mandatories, which applied to every case I had with him. Attorneys would come before him with bail reduction motions, and Judge Kogan would wax eloquently about how unfair the minimum mandatories were. Defense counsel would smile, thinking he was winning, while I was smiling on the inside, knowing what was coming next: "But that's the law, and if I don't follow the law, I don't deserve to wear this robe. Your motion is denied." One thing was for sure: Everyone always got a fair trial with Judge Kogan, and a kinder man never served on the bench.