Check below if you want the new SAO Lineup with phone numbers.

There is a candidate's forum set for July 21. 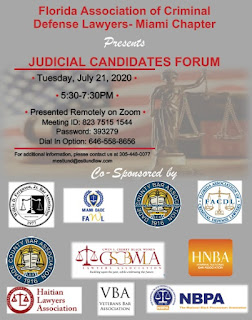 And based on the last rock-rollicking candidate's forum, which you can read about here- it will definitely be must see TV.
Let's play another little game like we did yesterday:

1) Which candidate in the "other skills" category will choose to sing "Swing Low Sweet Chariot" ?
2) When asked to name the last great movie they saw, which candidate will say "Muppets Take Manhattan"?
3) When asked to explain the most interesting legal issue they have recently confronted, which candidate will say "The possible trespass case in Muppets Take Manhattan"?
4) Which candidate is most likely to quote the National Enquirer and/or TMZ as the site they get most of their news from?
5) Which candidate will use the most "ummms" and "ahhhs" and "like...like this is the way like I see that issue, duh" in their responses?
6) Which candidate was employed by a disbarred, out-of-state lawyer the subject of multiple bar complaints?
7) Which candidate told the Wilkie Ferguson Bar association words to the effect of "I myself am a colored woman" and then said she was "colored" and had "Indian" ancestry, but actually identifies herself as Hispanic when she registered to vote? (see below) And thus which is the lie and which is the truth?
8) Which candidate has been accused in a court pleading of employing "runners" to solicit personal injury cases? (see below, especially paragraphs 3-4). A more foul and distasteful practice for lawyers to engage in we do not know of.
9) Which candidate may think Dred Scott was decided correctly because precedent should not be overruled lightly?
10) Which candidate might say "Korematsu" is one of their fav dishes at the local sushi-spot?
11) Which candidate might identify "sui generis" as one of the Instagram Influencers they follow?
12) Which candidate is the least likely to know the word "perambulate" that we use in the next section?

Post your answers in the comments section. Win valuable prizes.


CAN'T TELL THE PLAYERS WITHOUT A SCORECARD (Your 2020 Fall SAO Lineup)
Oh for the days when we would perambulate over to Marlin's park and buy a scorecard and settle in for a few hours of a meaningless Astros/Marlins contest. It wouldn't matter in the standings, so we could concentrate on whether the rookie pitcher a left hander, runners at the corner, one out, facing a right handed .275 contact batter, would decide to throw Uncle Charlie low and away, or walk him to load the sacks and face the slugger.

Here is the only scorecard worth (minimal) perusal now. Use it in good health, which is a saying that takes on added significance these days:

LAWSUIT WITH ALLEGATIONS OF SOLICITING CLIENTS WITH NON-LAWYERS-   Yes folks, your CIRCUIT COURT candidate has  long and distinguished legal career. We should immediately give her the power of life and death and freedom over  the citizens of Florida. Can't think of anyone better.

Aponte is by far the worst candidate that has ever applied for circuit court judge. And that is a high bar is surpass.She has never tried either a civil or criminal case to a jury and has never meditated or taken a civil or criminal depo although she fronts for a disbarred NY lawyer who continues to advertise on google and maintains a law office on Ponce. The NY lawyer Felicetti has violated a Fla supreme court order to abstain from practicing in Florida, She is aiding and abetting the unlicensed practice of law as well as other ethical violations. She has been banned from Bankruptcy court after admitting she has no idea what she is doing by Judge Cristol. She has been rejected at least twice before running for Judge. She simply is looking for a pay raises since her foreclosure practice is a disaster. Judge Tunis is one of the best we have with Government experience in trying death cases as a lwwyer and 20 years as a respected Judge.

Yup, Rosy is an unqualified idiot but, I voted for her today, by mail, to get rid of Dava Tunis.

OMG Thank you for running Rosy Aponte. You have Rumpole's attention. You are in his crosshairs. Not me.
YOU GO GIRL!

Judge Tunis is so nasty and arrogant. She is a nightmare to appear in front of she treated many attorneys like crap she kept us in her courtroom hours for things that should take minutes and berates good lawyers. Dava is whiny we are tired of her. Rosy is a pleasant humble person and many of us will be voting for her. Go Rosy!!!!!!!

Voting for Aponte. ANYTHING is better than TUNIS!!!!!

The above comments demonstrates how stupid so lawyers are in discussing Judge Tunis. They were probably bottom-feeders and were unprepared and deserved a good dressing down.

Hell yeah.... anything is better than Tunis. All the prior comments about Tunis are true. I hope that if she wins, she at least reads the comments because she is arrogant, condescending, mean spirited, rude, impatient, knowledgeable about the law, but horrible at practicing it.

Not looking good for Tunis.

Rumpole, just say that you support Tunis and that's the reason why you attack Aponte. If you are old and wise as you claim to be, you would know that "Hispanic" is not a race but a census origin. According yo he U.S. Census Bureau "Hispanic origin can be viewed as the heritage, nationality, lineage, or country of birth of the person or the person’s parents or ancestors before arriving in the United States. People who identify as Hispanic, Latino, or Spanish may be any race." https://www.census.gov/topics/population/hispanic-origin.html. If you meet Aponte in person, you will see that she is of mixed race with a mix of physical characteristics of white European, red Native Caribbean (Taino/Arawak) and black African races and that her origin is Hispanic Puerto Rican. So, your attempt to smear Aponte over how she described her race at the forum and the improper use of "Hispanci" origin as a "race" in voter registration records is just stinky hot gas emanating from b.s.

Being so woke and politically-correct, perhaps, you could be better informed about Hispanic culture where "de color" (of color) is not considered an insult but the respectful and proper manner to describe black and mixed-race persons. And, by the way, she is absolutely correct about the vagaries and craziness of political correctness and the speech police.

Aponte has an imperfect resume, but this race baiting thing that Rumpole is doing is probably the ugliest thing I have ever seen on this blog. Shame on you sir.

At the very least it is just terrible ignorance - which, frankly, is where most racism comes from.

The hate coming Tunis' way is ridiculous. She knows the law. She gets cases to trial (when the courts are open). She works hard. So to the crybabies who think she is mean? Toughen up, buttercups. She wouldn't draw such nasty comments if she were a man. But she is a woman, so the fact that she is smart and works hard is discounted by the fact that she does not suffer fools lightly. To anyone who votes for a clearly unqualified candidate like Aponte just because you don't "like" Tunis - you are a disgrace. Go back to junior high school and vote for "most popular kid in class," but don't practice law.

Aponte is the dumbest, most unqualified, unethical person ever to run for Judge in the long sad history of the bench of this County. She has never tried a jury trial and is under investigation for ethic violations as the Herald reported. The only benefit for the criminal defendants is that every guilty verdict will be reversed on appeal because she is so incompetent about the law.

9:36 is exactly right. Have you snowflakes been before Richard Hersch? Tunis is a cupcake by comparison.

Desperate times, Tunis has Bozo The Clown as a segregate attack dog. The Clown, a former Florida Legislator and the joke of fellow legislators (who joked about his foot fetish) is falsely attacking Aponte, claiming she is associated with an unlicensed or disbarred New York attorney. If this fool had bothered to do any research he would learn the falsehood he is promulgating. This Clown has attacked others with reckless abandon, and is irresponsible in dishing out his false and frivolous accusations. This Clown tried to get Marcia Del Rey kicked off the ballot with some frivolous claim, and got slapped by the Third. He has attacked City of Miami Officials, and accused City of Miami officials of corruption, with no proof of any kind! I heard there are at least three bar complaints coming against the Clown, and possibly implicating the object of the Clown's affection, Tunis, or her political handlers in the false accusations against Aponte and others. The Clown fits in well with the Tunis political team, comprised of campaign advisors who have a history of making up attack ads employing less than truthful facts. Horay for Bozo.

Those of you who said you voted for Ms. Aponte only because you hated J Tunis: Why didn't you run for judge, if you were such skilled attorneys that you did not deserve J Tunis's comments/demeanor with respect to your own work on cases before her? How can you think that voting for a person who lacks any ANY trial or even trial prep experience is a viable option to returning to office an experienced judge who has handled with intelligence and skill many MANY difficult and high-profile cases (even if you don't like her personally)?
Your comments, anonymous complainers, remind me of the complaints about the late Judge Alan R. Schwartz. People complained about his attitude and demeanor, but no one ever made a [valid] complaint about his legal knowledge and the acuity of his legal analysis. J Tunis may not rise to that high level, but it is certainly true that people (as J Schwartz did) can learn to be less cantankerous and more user-friendly, but you either have the legal chops (as he did and J Tunis provably does), or you don't. Ms. Aponte can produce absolutely no evidence that she has the necessary legal chops.

Wonder if Bozo is the guy with a brother who has his same name him or changed his name to run against him for the legislature? I would not concern myself with the foot fetish, some never outgrow their habit to suck on something, obviously Bozo is still a sucker.

Yes the clown is JC planas, and yes he had a cousin run against him. His name was JP Planas. Too funny. JC as a prosecutor was horrible. He was a C attorney for 4 years. And as a PD I loved facing him. It was a guaranteed win!!! Thanks JC.