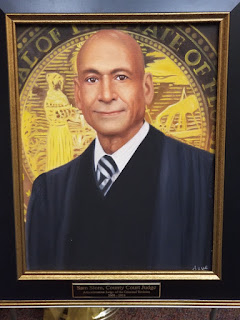 Today judges and lawyers and clerks and bailiffs gathered to wish Judge Sam Slom a fond farewell as he heads to retirement. It was a worthy send off for a Judge who has labored long and hard to make the REGJB a better place. Not only Judge Slom, but his JA and Bailiff- the sui generis Ma-bell, are all headed into retirement. 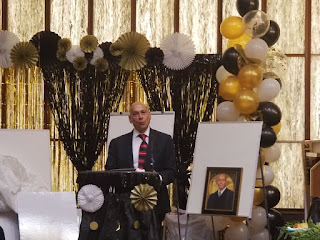 There was general merriment- judges sang a song!; some enterprising ASAs made a Slom-App (don't ask); there were some good natured jokes, a wonderful portrait painting procured by Judge Soto that will hang in Judge Slom's courtroom, and bittersweet sadness as Judge Slom heads to a well deserved retirement in another State. We have most likely seen the last of a wonderful Judge. Years from now young lawyers will wander into their first courtroom, wide-eyed, and at some point ponder the portrait of a man they will never know. Such is the river of life.

Sam was a fine ASA, very nice guy but hardly an effective judge. The quality of the judiciary is hardly taking a blow.

What sort of judge gives a 21 year old first time serving jury duty a 10 day jail sentence for missing jury duty. A Broward one of course. So many other ways to handle. Proves that our profession is less than honorable.

Gelber was CJ, then when he was indicted, it was Colby, whose main contribution was adding padding to jury seats.

The fake news reported he was a Broward judge. But the point is not one of location, it's of questionable judicial action or in this case over reaction. So much for judicial restraint.

Sounds like he was an ASSA, an ASSUSA and now an ASSJUD.

Please correct me if I am wrong, but my understanding is that the gentleman who received the 10 day jail sentence didn't just blow off jury duty. He had been selected to sit on a jury and didn't show up for the trial. In that context, the penalty seems more reasonable.

I have never heard, nor seen a portrait of a Kounty Kourt Judge being hung in a courtroom. This honor should be reserved for the great Judges like Ed Cowart, and Paul Baker. Who pays for the portrait and what is the procedure? Sam never rose above Kangeroo Kourt and his best accomplishment is "AL E. Gator.

I have never heard, nor seen a portrait of a Kounty Kourt Judge being hung in a courtroom. This honor should be reserved for the great Judges like Ed Cowart, and Paul Baker. Who pays for the portrait and what is the procedure? Sam never rose above Kangeroo Kourt and his best accomplishment is "AL E. Gator.

Phil, with all due respect to your former colleague, not even first time DUI offenders get 10 days in jail. There is zero justification for jailing this young man. There are so many other ways to handle it. community service hours, make him sit through a trial, make him write a paper, make him write a personal letter of apology to each juror who did show up, etc. But jail? Give me a break.

Judge Slom was not great and was not important. He never stopped being a prosecutor. He was the go to guy to collect money from the accused.

Sam, you are a decent guy but, no great judge. Enjoy retirement but, please don't come back and do senior judge duties.

I read the Blog ALL the time, love it, but very very seldom comment. I am posting now because I am appalled at the lack of condemnation and outrage expressed by our readers of Judge Kastrenakes' recent reprehensible conduct in jailing a 21 year old for missing jury duty. Even the few comments which were made omitted the important facts - the kid overslept, he had NEVER been in trouble with the law, he lives with, and helps care for his disabled grandfather, the trial was delayed for a total of 45 minutes, and oh, did I mention what I, and everyone else who is honest knew before I checked it out, the kid is African American? This judicial act is an intolerable example of the most insidious form of racism, and without question merited far more than a few random comments on a post related to Judge Slom retiring. Shame on Rumps for not making a separate post, shame on all of us for not calling it for what it unquestionably was, and shame on the JQC if they do not remove Kastranakes from the bench. Just sayin what everyone knows but can't say.

My memory of Judge Slom as a former PD was him commenting on a piece of evidence in front of the jury saying, "it wasn't important". It happened to be the booking photo of my guy that completely disagreed with the cops' testimony that my client looked "completely out of it". My guy looked perfectly normal. He wouldn't allow it into evidence even though the proper foundation was laid and the photo was relevant to rebut the cop's account of my client's appearance. I asked for a mistrial due to his comment on the evidence. He got all pissed (because he knew he was wrong).

I wish him well, but not the best judge. He did always remain a prosecutor.