Jury selection continues in the case of the second defendant to go to trial in the murder of  UM/Redskins football star Sean Taylor. Reid Ruben and Marie Mato for the State, Bob Bararr for the defense. Judge Murphy presiding.

In case you missed it and haven't been reading the comments to yesterday's post, the heat got beat last night. The wheels may well be coming off that band wagon so many of have hopped on.

Go to DOM's federal blog and read about what Judge Gleeson, EDNY, did. Gleeson is clearly the finest district court judge in the nation, with all due respect to the wonderful Judge Richard Kopf,  District Court Judge in Nebraska, and author of the second best legal blog in the nation: Hercules and the Umpire.


NEW HIT COP-COMEDY MOVIE STARTS MONDAY:
Here's the scene: Hip South Beach. Late at night turns into early morning. A couple of cops making the rounds of the clubs that are closing stumble upon a bachelorette party and are mistaken for strippers by the partying gals. The cops play along and take the girls for a spin on the beach on their ATV. Staring Vince Vaughn, Owen Wilson, and Jonah Hill. 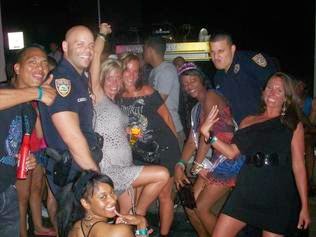 Oh wait. It's a real criminal case and it's going to trial Monday after voire dire this week. Officer "funny face" on the right (Derek Kuilan) faces charges of DUI serious bodily injury (he hit and injured two people on the beach during his joyride with the bride on his ATV) reckless driving, and criminal stupidity (enhanced to a felony for wearing a badge while posing for a picture). Evan Hoffman for the defense.

Truth is indeed stranger than fiction.

SAO VOWS TO APPEAL DECISION IN CONNELLY CASE:
Dade State Attorney Katherine Fernandez-Rundle (D-on vacation) vowed to appeal the decision of the 3rd DCA reversing and discharging disgrace former FBI agent John Connelly. The state will first seek an en banc (literally "Does anyone else think Leslie is right?") hearing of all of the judges of the 3rd DCA. Assuming a negative outcome at the 3rd, the state will seek certiorari with the Florida Supreme Court. In our expert opinion, appellate litigation could delay the resolution well beyond a year and up to two years. We have no idea if Connelly will be  released during this time, although we think that legally it is technically possible. Stay tuned.


Air travel back from LA  may well keep us silent for the weekend.

See You In Court.
Posted by Rumpole at 4:10 PM
Email ThisBlogThis!Share to TwitterShare to FacebookShare to Pinterest
Labels: Heat Stink

The Trialmaster has had both civil and criminal cases before Judge Gleeson in the Eastern District of NY. He is the finest Judge the trialmaster has ever had the pleasure of being in front of. No black robe fever, in fact he doesnt even wear a robe when hearing motions in court. He is prepared and does not tolerate unprepared lawyers or fools. Too bad wedont have his likes in Florida


By not wearing a robe, Gleeson followed in the footsteps of the greatest judge to ever sit in the EDNY and one of the great trial judges this country ever produced: Jack Weinstein, who still - in his 80's- sits as a senior judge.

Serious question Rump- simple criminal case. Will be resolved by PTI or wh cc. Can I date the client? Don't spout to me about Quinon. I am not sleeping with my client's wife. She is sexy, single, smart (an engineer) and very interested in going out with me. I guess I can wait but she invited me to dinner tomorrow night and I really want to go.
Advice?

It's Marie Mato you stoof.

8:18 pm, ask the judge to ask the clerk to order the file from upstairs and close the case outbefore dating the client. If they can't bring the file, don't risk your bar ticket. Just call one of the coverage attorneys to cover for you at the dinner.

Lawyers should be required to try a certain number of cases and pass rigorous examinations before they are eligible to take the bench. Has this ever been seriously contemplated?

Did Mastos make the statute of limitations argument on the chicken case?

Rumpole -- Weinstein? One of the greatest trial judges in history? You do realize that Weinstein legimitately does not follow the law, don't you? He just does what he thinks is "right."

Well, I have to tell 'ya Judge (chomp chomp, smack) I don't think the chickens minded it very much based on the discovery. In any event I think a continuance is in order.

Mastos is a walking rule 3

Rumpole. We need your wisdom. Who were the JNC members who nominated Judge Nuria Saenz and what year? We cannot recall.

I am pretty sure it is spelled voir.

I'm curious on the animal cruelty case, didn't the State know when the videos had been made BEFORE they filed the case??

Many thanks Rump. Due to your good offices the owner of Brindash and I met for dinner last night. A lovely young woman.

Referring to Reiner Diaz De La Portilla’s candidacy, someone commented that “[i]t's come to this. You no longer need experience, qualifications, courtroom experience or judicial temperament. Lawyers will still line up to support you. How pathetic.” The statement is an over simplification. The issue if far more complex than “resume.” A resume alone does not make a good judge. Having an understanding and appreciation of what it is to run a practice cantering to the less affluent of our community is essential. Having, what I term a community consciousness is vital to being a good judge. So many of these pedigree jurists are prodigal children of, and products of affluency so their community consciousness is a private school, exotic cars, gold cards, ivy league, etc., who land a job in a silk-stocking firm, often because of family ties or names. Take a lawyer from a silk-stocking firm, with a pedigree and prodigal upbringing, who has never had to worry about running a practice, particularly the economic side, give him or her the judicial power to project his or her experiences upon the word and watch their failings. Enhance that individual’s ego by giving him or her a title within the judiciary, i.e., administrative anything, and watch the shortcomings exponentially. There are good and bad jurists, for sure. While affluency and pedigree do not necessarily mean a poor jurists, some of the new generation is disappointing. The high power firms cater to a select group of financially affluent individuals and entities who have little, if any economic worry and enjoy access to equal justice. On the other end of the spectrum, is the large group comprising our community; those in lower social-economic brackets, so many who often make just enough not to qualify for the public defender, and cannot afford meaningful representation and consequently receive less than equal justice.

I write my commentaries after a recent courtroom observation in which all of us who were on the sidelines were dumbfounded by how the judge handled the issue of a first time continuance or his negative commentaries about the “idea in this building.”

Need a good lawyer for a fla bar issue. Any referrals?

No judge in the building denies a first time continuance. 11:27am should name the judge. I, for one, believe the story is false.

BT is good but for my money hire Alex Michaels. He scares the bejesus out of the BAR.

New judges deny first time continuances all the time. They arrive with this naive belief that everyone else is weak and they will be a force for change. Of course the judges I am speaking about never tried a case in their lives so all they were doing was trying to put theory into practice. It usually lasts a week or two until they give up.

Alex will look at the complaint. Say "dis is bullsheeet" and charge you $3,500/ 1k down and you're done. Hire him.

The heat called the shumie on the pacers big time.

Rump, got a prediction in how quickly the heat are gonna lose the championship game?

DLP and Victoria please know that the victims are really the community said...

Great comment. Totally on point. Reinier getting on the bench is as ridiculous as Victoria Ferrer thinking that because she has 5 years as a lawyer she should replace Judge Nuria Saenz. Preposterous!

Victoria needs at least 3 more years to even consider taking her own deposition. Judge Saenz should not have to battle this attack by a young attorney with an ax to grind. Just like Reinier should at the very least take a deposition, represent someone at a hearing and file his first motion.

Why are these two running? It is crazy!

a large part of good bar counsel is reputation. Ive seen people hire criminal defense lawyers who are thought to be aggressive, but if you want the best result in your bar grievance matter, look up the last 5 bar Presidents, pick one or two and meet with them. If they wont take your case, they will be able to send you to someone who knows the players and the system and has the juice to influence the bar prosecutors, any referee you end up with, and the Supreme Court if it comes down to it. If youre not an a-hole during the meeting, you increase your chances of having a former president of the bar as your advocate.

Fingerhutt is a good bar atty

We need references for good Appeal Attorney for a criminal case. Public Defenders Appeal Division has been appointed but we hear it will take a very long time with them. Please advice. What is your opinion. We will appreciate your help.

send rumpole an email at howardroark21@gmail.com for advice.