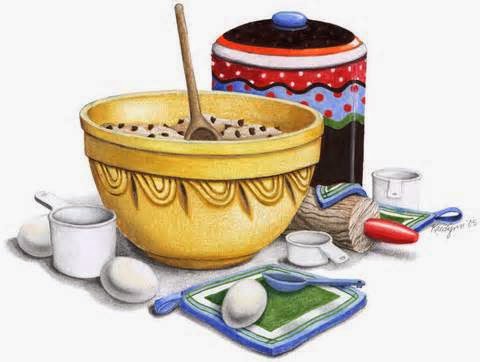 Judge Brennan is holding a Bake Contest! Open all to habituates of our beloved REGJB.

Rumpole installs David S Markus, (NOT DOM) as the favourite.

This is a time honored REGJB tradition which in recent times has fallen by the way side.

Judge Martin Kahn used to hold various food related contests.  It was always a good way to pick up a good and free meal by crashing the contest back when we didn't have lunch money.

If someone could send us a copy of the flyer, we would appreciate it and would post it.

Rumpole approves of such endeavors. They foster a collegial atmosphere in our courthouse.

(UN)HAPPY IN IRAN
Six Iranians have been arrested for dancing in a video made of a Pharrell Williams song "Happy" (which we must admit we were unaware of until this story).

The CBS story is here.

Rumpole disapproves of such totalitarian activities by the Iranian government.

Holiday weekend coming up.
Don't miss Rumpole's much requested "How to Grill a Steak Indoors". This Friday. Until then....

See You In Court.
Posted by Rumpole at 5:26 PM
Email ThisBlogThis!Share to TwitterShare to FacebookShare to Pinterest
Labels: Bake Contest

Not to be confused with the now defunct FPD bake-off.

All of us wish Judge Brennan would move away and run bake sales for a living SOME WHERE ELSE!

This nuts. Do they know Al the Terrible?

It appears that Juan D'Arce is back . This time he has hooked up with a suspended lawyer. Pay close attention lawyers and judges our justice system is too important.

I don't allow comments about a judge's child no matter how exceptional or successful they are. I know your comments were well intentioned.

Seriously? Juan back? Seen too many JA's running around at fundraisers and organizing events. Let's not forget posting and emailing for their judge. Posting that comment such a long time, over 8 years, sounds like a serious lack of material for this blog. We all know the low standard of proof for KFR and there was zero result. This is still America and it's a right to be involved. One thing you are proving is that anyone who sees the facts knows that Juan knows the game and is once again important because he can win. No matter how much innuendo was created.

Hernamdez lost because he was not a rat and he allowed his wife to direct his campaign. We all know that whole deal was a Juan Gonzalez v. Leifman issue anyways. This being 2014 makes a huge difference and being on the ignorant side of 2006 is a moot point.

Of more relevance is the attorney bully that placed a 6 year lawyer against a Judge in this year' selection and another in 2012 because he was made to wait before being called. Serious problems of ethics at our doorstep.

In other words, get a life. You have Al running. Great material there. Giving a huge stage to a 2006 gossip column just does not seem smart.

Why is this "suspended" lawyer important? If he is not practicing law who cares? Are we not allowed to still support anyone? This is not Cuba or Venezuela correct? Show some intellect here Mr. Chavez-Castro.

Someone must feel threatened.

Judge Brennan may be kinda nice out of court but, her in court rudeness makes me not want to spend any free time anywhere near her.


Now here is a real nice story for all of you Facebookers!

LEGAL EXPERIENCE:
Commencing in 1988, I worked as a prosecutor with the Broward County State Attorney’s Office. From 1994 through 2000, I became a member of the Career Criminal Unit. My main responsibility was to prosecute habitual offenders and violent career criminals.
Both as a prosecutor and defense attorney, I have tried over 300 jury trials including charges of murder, robbery, burglary, and other violent crimes. As a labor attorney, I have tried over 30 arbitrations to verdict and I have handled over a hundred internal affairs investigations.
During my assignment to the Career Criminal Unit I attained an 80% conviction rate during jury trials. In addition, I handled special assignments in the area of public corruption.
From 1992 through 1994, I was assigned to the Drug Trafficking Unit with responsibility for prosecuting major narcotics cases. My duties included supervising the preparation of drug trafficking cases for trial. In addition, I oversaw the use of informants in long-term derivative investigations that led to the filing of additional cases.
As a labor attorney I have represented clients from the Police Benevolent Association, the AFL-CIO, the Fraternal Order of Police and the Hispanic Police Officers Association.

Seems there is something missing...


A must watch video!

Interrogator and that helps to be a Judge. I never saw it. Go Al!

Judge Young is referenced at the end of this video. Listen closely. Anyone know why?