THE HUNT FOR BIG BIRD 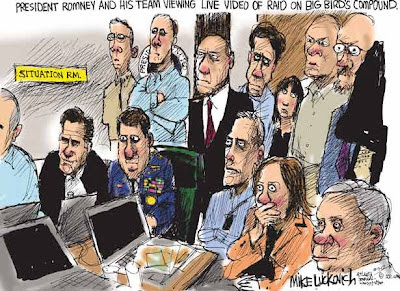 Will Big Bird, Sesame Street and government funding for PBS be the defining moment of the 2012 presidential election?

Dolphins: We're gonna say it right now. The Dolphins are well coached and have a decent team. Mark this day down. Here it goes: "We were....(gulp) wrong."

Urban Legend: That a county prosecutor in Ohio, in response to a fashion tip from a judge, went to a bathroom, removed her dark coloured panties from underneath her light coloured dress, and returned to court and entered the panties into evidence. As per ATL here.  Never happened.

Quote for the week:
Good character is not formed in a week or a month. It is created little by little, day by day. Protracted and patient effort is needed to develop good character.
Heraclitus

Have a good week.
See You In Court.
Posted by Rumpole at 2:30 AM
Email ThisBlogThis!Share to TwitterShare to FacebookShare to Pinterest

Mr. Feiler. NC State. We're talking, NC State. Are you kidding me. How does your team let up three fourth down conversions in that final series including the game winning TD play?

You must be in deep depression with that loss and your beloved Gators beating LSU and replacing FSU in the top five.

It was indeed. Losing to a crap team like that is definitely a downer. And I'm sure I deserve a little calling out on the blog.

The good news is I still think we spank the Gators and Canes. But still, even an OB berth this year will be a disappointment.

Good thing about the Gators' bowl, though, you can go to the game and still be home for New Year's Eve.

Always nice to hear from you though, Your Honor.....

In 1492 Columbus sailed the ocean blue

Today we celibate the destruction of Indigenous Americans & their societies.
Oh yes, and the stealing of their lands and natural resources
by European's in the name of Christ

OK AM
This Guy is crazy


A Republican state representative from Arkansas has released his own personal memoir where he doesn't blow typical conservative dog whistles, but screams his own racism out loud.

State Rep. Jon Hubbard from Arkansas has recently released his memoir titled "Letters to the Editor: Confessions of a Frustrated Conservative." In his memoir, Hubbard offers complaints and grievances commonly found in books written by conservatives, but Hubbard took his work one step further. According to a review at talkbusiness.net, Hubbard argues that slavery was actually a "blessing in disguise" and that African-Americans have benefited from it in the long run.

“the institution of slavery that the black race has long believed to be an abomination upon its people may actually have been a blessing in disguise. The blacks who could endure those conditions and circumstances would someday be rewarded with citizenship in the greatest nation ever established upon the face of the Earth.”

Hubbard doesn't stop at slavery, he continues and notes that African-Americans are just lazy and don't value education.

“ Wouldn't life for blacks in America today be more enjoyable and successful if they would only learn to appreciate the value of a good education?”

Continuing the theme of African-Americans being lazy, Hubbard doesn't try to sugarcoat it and states his opinions very clearly.

“Will it ever become possible for black people in the United States of America to firmly establish themselves as inclusive and contributing members of society within this country?”

Hubbard's comments are shocking, but shouldn't come as a complete surprise. The Republican party has been on the wrong side of racial issues for the better part of the last 100 years. While mainstream Republicans might not be as clear as Hubbard, the underlining core of their bigotry shines through.

Glad to see the return of Ali Gator

I am not surprised, that's how a lot of idiots think.That is why I am who I am. I understand history and the mentality of most of my fellow citizens.

Somebody unplug sisselman or take away his weed . He is making the blog very hard to stomach

Here's a fun idea: let's put DS and AM together in the ring. For extra fun, they can both be greased down. Let's see who survives.

8:52 PM--let Alex Michaels set the rules and serve as referee. Maybe he can bring Nickolai his 850 pound Romanian black bear for even more fun. Lots of ducats to be made.

As for guidelines--they should be just that, guidelines. The current Florida guidelines suck because there is no top, and one can score to state prison on all but the most minor felonies, or if one has a prior. I see the point in having the guidelines eliminate disparities. But a good judge will evaluate the full facts of a case. Many cases cry out for a lenient sentence, others for a harsh sentence. Let the judge make the final ruling.

Dear A Modest Proposal
Sorry been off my game since I found our Shakira is having someone eles baby. Just broke my heart.

Maybe AM & I can have a Frickzee Cooking contest. Isnt that the recipe from J. Swift?