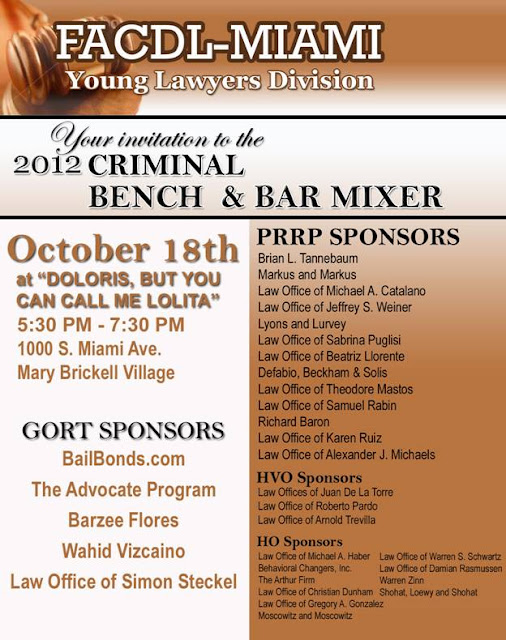 Oil and water do not mix, nor would you invite Barak Obama and Mitt Romney to the same bar to have a few beers.

Gator fans and Nole fans should generally avoid each other this time of year. The Palestinians and the Israelis haven't been known to call it a day and sit back and down a few cold ones.
And nobody wants anything to do with the Broward judiciary.

But for the hopeful amongst us; the ones who keep hoping for another Dolphin super bowl; the ones who are sure that house they bought in 2007 will recover its value; the ones who believe everything they read in an a-form....for all those wild and crazy optimistic dreamers, there is another "Bench and Bar" mixer tonight, where Judges and lawyers get together, hold their nose, and have a few drinks.

Don't look for us. Optimists though we may be, we have our standards for socializing.

Have fun. See you in court.
Posted by Rumpole at 6:47 AM
Email ThisBlogThis!Share to TwitterShare to FacebookShare to Pinterest

Couldn't agree more with Mr. Rumphole, but for somewhat of a different reason. Imagine being a judge and being cajoled to attend an affair with a bunch of suck-up lawyers who think by pretending to be your pal that this will give them an edge in court. It just so insults the intelligence of any fair-minded judge. I stopped going to these events years ago, keeping in mind the old Groucho Marx line, "any group that would have me as a member, I refuse to belong to".

I wondered who would support this now that so many defense lawyers have become judges.

You'd have thought more people would've came out to Bobby Aaron's happy hour, and wish him well after 30 or more years of remarkable adovacation. What a magnanimous guy, he is one of the last great formidable few advocates, hope he continues in private practice.Men & women such as him, are the watchmen of justice.

Will there be a live band, that can really jam? Great music, and tragedy seems to be the only thing that brings adversaries to a neutral and enjoyable setting. Whomever is coordinating this event should consider booking Ike woods he is an outstanding guitarist, saw him on stage at the house of blues with BB King. He can really play.

Why would I "mix" with Judges? Am I likely to "get lucky"? Can I get one free felony for a client? Have I run out of people I would actually want to see during an evening? Even if I did, am I incapable of finding satisfying entertainment?

This whole idea stinks! Free drinks in trade for a potential conflict issue!

To A.M. What the heck is adovacation? Are you really that stupid? Do you mean advocacy? Who really knows what you mean? Did you graduate from high school? You sir, are a low grade moron. Go hide somewhere until you get educated.

@7:55- don't waste your time. It's like talking to a brick wall. You'd have a better shot of pissing in the rain.

A noun is a part of speech typically denoting a person, thing, place or idea.

In linguistics, a noun is a member of a large, open lexical category whose members can occur as the main word in the subject of a clause, the object of a verb, or the object of a preposition.[1]

Lexical categories are defined in terms of the ways in which their members combine with other kinds of expressions. The syntactic rules for nouns differ from language to language. In English, nouns are those words which can occur with articles and attributive adjectives and can function as the head of a noun phrase.

LOL! You guys are bias beyond reason. Someone uses a noun you mistake for verb and you immediately commence to insults. You exhibit your true nature. It's somewhat oddly entertaining. smh you guys are kind of pathetic.

The race for the Presidency continues to tighten. The latest tracking polls still have NOT factored in the debate from Tuesday night, so the numbers could still change. And there is a final debate, on foreign policy, schedule for Monday night in our backyard, in Boca Raton.

The NYTimes 538 shows Obama at his lowest number of EC votes since they began tracking this election. They have the incumbent President with 287 votes and challenger Romney with 251. That provides Obama with a cushion of only 17 EC votes.

NYT looks at nine states as still very close including:

Six of the nine states are being counted in the Obama EC vote. Just take a look at each of those six states and you can see that if Obama won five of them, but lost OHIO, Romney would win. (Actually, in that case each candidate would have 269 EC votes and if you thought the 2000 election was hanging chad crazy, you ain’t seen nothing yet).

Huffington Post has the numbers at 277 for Obama and 206 for Romney, with 55 EC votes still too close to call. Those 55 come from only four states:

So Huff Post believes that even if Romney carries those four states, Obama still wins by the skin of his teeth. A closer look though at Huff Post numbers show that the States they are counting for Obama include no less than four states where Obama has less than a five point advantage: Iowa (+4), Nevada (+3), Ohio (+2), Wisconsin (+4).

With 18 days to go before election Tuesday, it continues to be an exciting race.

biased, the word is BIASED.

Dear madam/sirs, again I was using the noun present tense, and not the verb or adjective form.

You guys are amazingly ingenious...

Noun 1. bias - a partiality that prevents objective consideration of an issue or situation
prejudice, preconception

Lindsay Lohan, took time away from her troubles to tell the world Romney had her vote.