CHAOS AT THE COURTHOUSE

UPDATE: You're an attorney on the run.  Your firm is in the hands of receivers and the Feds are getting ready to pounce. You may just be Ft. Lauderdale's Bernie Madoff. What do you do?
Why, since it's North of the Border, and you're Scott Rothstein, you go to the Captial Grille with your attorney for martinis and lunch. Check out Bob Norman's Daily Pulp blog  AND THE VIDEO (they mix a great martini at the Capital Grille) here. 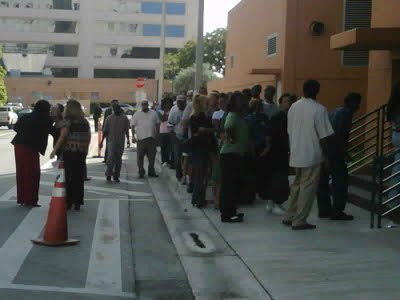 While Judges Blake and Slom were figuratively and perhaps literally relaxing in their chambers and sipping a cup of coffee while perusing the comics section of the Herald, this was the scene outside of the courthouse as lines stretched around the block and even attorneys found themselves waiting for upwards of 30 minutes or more as the security screening apparatus in the back of the courthouse broke down.
Several 12th Street Irregulars sent missives:
Rumpole- It's 9:31 and I've been in line since 8:50. Something's happened to the machine at the back of the courthouse and the line is not moving. Even worse, the clients are on the verge of revolt and they've barged into our line and now I have to stand next to some large sweating woman whose son is going to be sentenced by Judge Miller today.  Send help!
Rumpole: I'm back in my office after waiting 25 minutes in line to get into the building this morning. There is no help at the back and the security people don't do anything to enforce the attorneys only line. People who aren't attorneys wait in the line, then have to go back through the machine several times because they're too stupid to take out their keys and cell phone and when I complain to the security people they shrug and say "no english".  Isn't Blake supposed to be in charge of this? Can you do something to let him know we can't get into the building now?
Rumpole says: There you have it. A massive problem. Will the judiciary respond?
UPDATE: LT Arrested for LSA! Click here.
Posted by Rumpole at 1:05 PM
Email ThisBlogThis!Share to TwitterShare to FacebookShare to Pinterest

Funniest line of the week:

and Rump, the answer to your question is Yes and No.

The response is, the judges have nothing to do with courthouse security. While Judges Blake & Slom can voice their opinions, the issue of security, magnonomiters (sp?), who staffs the lines, how many entrances are available to add more of those things, etc., etc., is up to the Building Manager.

Stop whining and deal with it. The fact is, sh-t happens, and every once in a while, one of those machines breaks down. At least it's not the escalator system!

We have tried to get the County to install more machines and open another door and looked into other possibilities. Until the taxpayers are ready to foot the bill for a new building, face it, little will change. There is less money to go around, and while you can all dream of solutions to the problems of traffic flow, unless the judges are willing to start "night court" and get attorneys to show up to them, this is what we have to live with for the foreseeable future.

Be happy that your FACDL group got you that entrance. Remember just a few years ago when you didn't even have that.

By the way, happy to see Pick 'em Paulie is still breathing.

Judges don't care. Their staff and their highnesses simply show ID and walz by the lines.

The least we could expect is Slom and Blake and Leifman (What's he doing lately???) to stand outside and serve some dunkin donut munchkins and coffee and juice while the attorneys wait. Personally, being out of town for the next few months, this bothers me not one whit.

But as Blake took credit for the attorneys line ( I was there when he said it) then the least he could do is step up and make inquiries and find out what is going on. The FACDL can't. They're too busy fighting on the listserv about dues for PDs.

Where was Blake? said...

I was there. It was awful. I had to stand in line and in front of me was Ted Mastos bellyaching he has been coming to the building 39 years and this was the worst day ever. Plus the civilians were screaming.

They don't pay me enough for this crap.

What needs to be done is simple. We need a new, modern and MUCH larger Criminal Courthouse. Miami-Dade is the mecca of crime in Florida and next to Broward, have one of the smallest courthouses I have seen in any of the larger cities. The County, City and State officials need to cough up some cash so the Miami criminal conveyor belt can keep pumping out convictions and collecting those all important court fees.

At least annouce that all cases are continued?

Almost every computer has a video cam, so why can't we use them for Court appearances?

I've been coming to this (smack) building for 38 (chomp) years, and I've never had to wait this (smack) long to get into (chomp chomp ) the building. I'm all (smack) off my game. (chomp) Time for a continuance It seems like to (smack chomp) me.

How come there's a mug shot of Taylor? Did they do a physical arrest on a stupid LSA charge? Did he have to bond out? That rarely ever happens. They fill out the A form and hand it to the guy at the scene.
I have lots of clients that get charged with LSA who never even have to sit in the back of the police car, much less get taken in. The cop that did that knew who Taylor was and wanted to humiliate him.

From what that mug shot shows, looks like the cop could have dropped a DUI on LT. look at those bloodshot eyes.

Lawrence should be happy thats all he got.

I have had lots of clients with LSA charges who did take the ride to jail. So there!

Regarding Lawrence Taylor, doesn't the law state that if the misdemeanor, which this LSA is, does not happen in the presence of the officer, then the officer cannot make a physical arrest and take him to jail. Somebody please correct me if I am wrong.

Accidents are an exception in the statutes.

You can arrest later.

Guess who is back: JUDGE TUNIS.

Boy does everyone in her courtroom miss Stan Blake.

She is back to being rude and offensive to almost everyone.