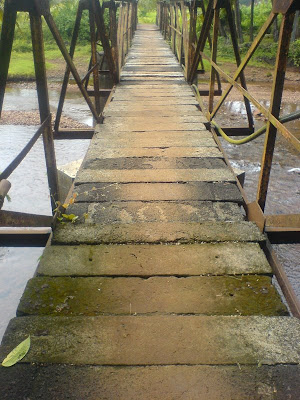 Rumour has it that one of the more distressing periods in REGJB history has come to (or will soon come to) an inglorious end with the re-opening of the 17th avenue bridge.

If you recall, in an example of superb urban planning, while re-constructing the 12th Street Bridge, city planners suddenly decided to close the 17th avenue bridge, effectively reducing access to the REGJB from most points south to one or two lanes of obstructed traffic on one bridge over the famed Miami River (motto used to be: “cops dump your drug rip-off murder victims bodies here”. You younger lawyers go ask someone who has been around a while).
Of course the 17th avenue Bridge’s sudden closure was not the result of anything other than a bridge collapsing in Minnesota, which prompted some intern in the Miami City Engineer’s office, who happened to be watching CNN, to do a little investigation which yielded the interesting result that the last time the 17th avenue bridge was inspected Richard Gerstein was sitting on the 6th floor running things.

So rather than face the tragedy of a bunch of judges and lawyers unceremoniously dumped into the Miami River in their Lexus SUV’s (who said our blog was depressing? Can you think of a better picture to cheer you up on a Monday?) someone decided to inspect the bridge and found that the last temporary repair of scotch tape and paper clips was just about to fail. And ever since our commuting time to work has doubled.

But now free at last, free at last, we can drive our fuel inefficient SUV’s to work while on the phone and drinking starbucks while screaming at a client, at last!

See You In Court, and now you know how to find us- just hang out on the 17th avenue Bridge and watch us commute to work.
UPDATE: Thanks to hawaiian shirt wearing former Dade PD Roy Gonzalez for alerting us to our mistake about the bridge being on 17th avenue, not street. Roy writes in to tell us that retirement was boring so he is now practicing law in Sebring.
Hmm...no work...no shirt and tie...no clients complaining..no jails to visit...sit around all day and drink beer and cash a pension cheque....somebody needs to get Roy a psych eval!!!
Posted by Rumpole at 7:55 AM
Email ThisBlogThis!Share to TwitterShare to FacebookShare to Pinterest
Labels: 17th street Bridge

Suppose you had to choose between two Presidential candidates, one of whom had spent 20 years in Congress plus had considerable other relevant experience and the other of whom had about half a dozen years in the Illinois state legislature and 2 years in Congress. Which one do you think would make a better President?

If you chose #1, congratulations, you picked James Buchanan over Abraham Lincoln. Your pick disagrees with that of most historians, who see Lincoln as the greatest President ever and Buchanan as the second worst ever, better only than Warren 'Teapot Dome' Harding.

Rumpole, this has me thinking, do you know why Simon and Garfunkel wrote both "Bridge over Troubled Water, AND "Feeling Groovy" (The 59th Street Bridge Song)?

What was their interest in Bridges?

Long time and careful readers of the blog will recall that Rumoole ranked Lincoln as our greatest president. Lately I have been pondering whether Obama, from Illinois, and poised to be President during what I believe will be an extraordinarily dangerous and difficult time for our country and world, may well be another Lincoln. He is untested, as Lincoln was, but there may just be something about him.

Yes, the bridge is OPEN.

Yes, the bridge is OPEN.

With Obama, I must balance making the world a better place, peace, respect for america again, an efficient government, fair treatment of the poor vs. my own financial interests of increased taxes and me paying for all of the social programs for the lazy and unemployed, but employable.

Rumpole, the credit with regards to the 17th Avenue bridge closing doesn't lie with the City of Miami. It lies with Miami-Dade County Public Works Department. In any event, they avoided a Minneapolis-like tragedy and finished the job three months ahead of schedule, so they should be praised instead of blamed.

A good thing about the bridge's closing, though, is that it showed that you can get to the Justice Building almost as quick using an alternate route without having to pay the toll on 836.

Rumpole ... while we still can't seem to negotiate around the Justice Building roads and bridges ... we can marvel tonight at one of man's most spectacular achievements of the 20th century.

At 2:28 AM, Endeavour is scheduled to launch from Kennedy Space Center in Central Florida. The crew is commanded by Miami Palmetto High graduate Dominic Gorie.

If you've never had the chance to see a nighttime launch, stay up late tonight and watch them "light that candle".

As a lawyer and a pilot, I keep my fingers crossed every time a space shuttle goes up.

Let's all keep our fingers crossed for those brave women and men on that aircraft.

Rump, There is "something about" Obama. He and his wife complain about their student loans every chance they get, as if $1 million in income isn't enough to retire them. Jeeez. Whiners.

Overall, I like Obama, but I have my reservations. I'm extremely suspicious of charismatic figures.

Sometimes I think he's a demagogue...just a thought.

Great story in the Miami Herald today about Florida City Mayor Otis Wallace- who has served for 24 years as Mayor.

If memory serves me correctly, Otis was an Assistant Public Defender for a short period of time?

to Launch of Endeavour

are u still considering a run for PD?

Rumpole, today we had the funniest of conversations and I learned a new word. Some young Hispanic lawyers were talking about this Blog and called you a name I never heard, but have grown to love for you.

They called you a "Sapingo." I trust you will look it up and wear it well.

All the best Mr. Sapingo. See you in Court, or better, we won't since they claim you are a bottom feeding tickete abogado de Hialeah...

Excuse me, but I announced this opening on Friday. Old news.

He was a nice guy.

I hear someone is running against Harvey.. Does anyone know who it might be?