Julio Morris is on trial for murder. The case has lasted a few weeks already before Judge Al Milian. The trial was scheduled to begin a few months ago when a key witness turned up dead. On Thursday Morris was formally charged with ordering the witness killed. Two other people are in custody on the murder of the witness.  We note that "elimination of a witness" is a statutory aggravating factor for the death penalty. The trial for Morris continues. David Peckins  and Stuart Adelstein for the defense.

**POOF**
For his next trick, David Copperfield who once made the Statute of Liberty disappear, will now make the REGJB disappear. This cannot happen soon enough. 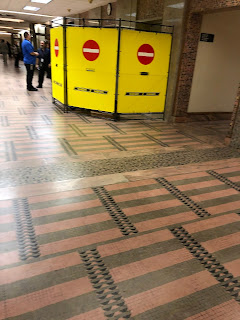 Posted by Rumpole at 9:19 PM
Email ThisBlogThis!Share to TwitterShare to FacebookShare to Pinterest

The following senior judges’ current service will expire on September 30 and they are seeking service renewal. Any persons having knowledge bearing upon the fitness or qualifications of any of the senior judges on this list to continue service as a senior judge should send, on or before March 31, written comments to John A. Tomasino, Clerk, Florida Supreme Court, 500 South Duval Street, Tallahassee 32399, or by email to seniorjudge@flcourts.org.

The 3rd DCA JNC has sent 9 names to Governor DeSantis. He will choose two to replace Justices Barbara Lagoa and Robert Luck who were recently elevated to the Florida Supreme Court. The names are:

The 11th Judicial Circuit JNC has sent 9 names to Governor DeSantis to replace Judges Eric Hendon and Bronwyn Miller, who were both recently elevated to the 3rd DCA. The nominees include:

Gov. DeSantis should be making his decision in the next two weeks.

None are outstanding. Thankfully, Judge Hanzman, the best ever stays in Circuit where he can continue to serve many cases and attorneys at the trial level. He should be a Federal Judge, and if so would be the best we have in the SDFL.

And this right here shows the very ignorance we reporters have to deal with. YES, we NEED a notice. It provides YOU with an INFORMED reporter. You are hiring us to take a job. Jeez, can we at least KNOW what the job is? Am I walking into a medical malpractice case with nine lawyers in the room? I have to provide YOU a transcript, but you don't want to provide me the firm names, the attorneys' names, the addresses or the emails of the people in attendance? You want to start right away, but I NEED to know who you are BEFORE I START.

It's literally a matter of respect!!! Everyone in the room knows what the case is about. Can you please give the reporter the courtesy of a NOTICE so we can decipher at least what we are walking into? Am I to delay the proceedings by asking everyone in the room who they are and who they represent and how to spell their name and which office they are located in, as many firms have offices in different counties, cities, states?

I write realtime, as in closed-captioning, like you see on TV. It comes up on my computer screen as you speak. We write in short-hand with brief forms. It's like another language. Different letters equal different sounds, as it is phonetic. How the heck do you expect Mr. Steffinbaucher's name to come up translated IF I DIDN'T PUT IT IN MY JOB DICTIONARY BEFOREHAND with a brief form?

And for the very unfortunate chap who wrote something about the president or a surgeon needs less information beforehand, your ignorance is beyond response. A skilled reporter will review the notice, input all names on the notice, including the style names, the deponent's name, or names, and the attorneys' names so that it comes up translated into English AS YOU SPEAK. PLEASE, for the love of God, RESPECT that we are part of the process, A VERY IMPORTANT PART, and allow us to be informed WITH A NOTICE BEFORE WE WALK INTO THE ROOM.

First of all, you posted a comment under the WRONG post mi amigo/amiga. The court reporter rant is the PRIOR post. Second, my rant is that when emergency issues arise, and I call a court reporter ON A CRIMINAL CASE and tell them I need them, I can even tell them the case name and number AND name of the witness on the phone. It's never enough. I can offer to pay them $20 a word transcribed. Doesn't matter. THEY NEED A NOTICE. "It's a death case. A man's life is on the line. I can save him if you show up at 3." Doesn't matter. No notice - no depo.

Look, I work for money. I get it. A lawyer friend calls and asks me to appear quickly in court to help them. If I can I drop what I'm doing and go. I do not respond "well can you send me your notice of appearance and perhaps the information and some of the depos."

My rant is court reporters unlike almost every other profession does not seem able to respond to an emergency request.