Naphtali Wacks was a criminal defense attorney who practiced in the REGJB. He was what we would call a Justice Building Irregular. He was there often. He was sui generis. He was a kind and gentle man who worked hard for his clients and he was killed in a tragic car crash in 2017 by a federal felon who was driving more than 100 miles per hour.

The man who killed Naphtali pled guilty and was sentenced to 14 years in prison.
Herald scribe David Ovalle's article is here. It does not mention the judge who sentenced Naphtali's killer. 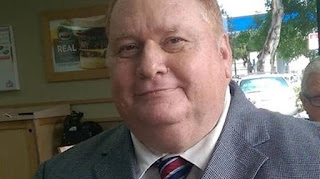 Naptali was a good guy. He never said a cross word about anyone. He was kind and gentle and marched to his own drummer. We used to see him having coffee with Sy Gaer in the mornings.  He is missed.

Posted by Rumpole at 10:26 AM
Email ThisBlogThis!Share to TwitterShare to FacebookShare to Pinterest
Labels: Naphtali Wacks

Naphtali was a good man. He was quiet but always polite and friendly when he did speak and he always had a smile on his face when you passed him in the hallways of the GJB.

Naphtali always did have a smile. He had a variety of interests. He would often spend afternoons in a library or book store reading about various historical periods that interested him. He was a gentle soul.

He was a good writer. And he always had a few tricks up his sleeve during motions. RIP

Geeze Capy everyone but Akhbar Hussein and Bennet Lapidus and Stu Mishkin filed notices on the case. Why?

WOW a Bennet Lapidus drug lawyer from the 1970's reference. Far out. What about the Cuban Rocket Gino Negretti?

Don't forget Max Engle and Mel Kessler (RIP both ). Those guys were legends

stuart Mishkin the original riverboat gambler at trial. He would have never taken the 14 years. "Pick six" he would have sneered.

Not quite sure why the post needs to emphasize that the defendant was a "federal felon."

Naphtali was one of the nicest people you could ever meet. So unfortunate. Glad the SAO got some justice for him.

8:26 pm, Negretti's car was bombed by a former cop whose wife Negretti represented in the divorce with great success. The ex-husband got acquitted at trial and, believe it or not, remarried the ex-wife!

One of my favorites--Stormin Norman Haft. Tom Duff always had a flower in his lapel. Bobby Haggard, always fought hard for his clients. Avin " the warlock" Goodman, hard to forget.