It's not a Trump-ian inauguration, and we are sure that Kathy Fernandez-Rundle will not obsess over the size of the turnout, but today is the swearing in of our State Attorney, and all of her assistant state attorneys.

So if you want to respond when the padre says "whoever objects, speak now or forever hold your peace" this would be the time to do so.

Here are parts of her speech that we would offer, gratis, for her to use:

"I stand here today in ths shadow of giants. Richard Gerstein, who trained a generation of lawyers who shaped this community and who had the good sense to recommend Janet Reno as his replacement. And of course Janet Reno, who instilled in the next generation of lawyers one simple ethic that applies to any age and any time: Do right. Go where the evidence leads you regardless of the political consequences, and never ever prosecute a person who MAY be innocent....

"Reno and Gerstein planted acorns, that grew into oak trees and you- the members of this great office, stand in the shadow of those great trees. Never forget that you have a lifetime to create your reputation, and just a few seconds to ruin it. Your opponents may mislead you, but you can never mislead them. Judges may dismiss your arguments, but you can never dismiss them. Police and witnesses may not respect you, but you can never disrespect them. In short, you have the toughest job in the legal system. And the best. ...

"Your simple mandate is a holy one in our society. Go do justice. That often means winning, but sometimes means losing. But you don't lose when you dismiss a case or reduce charges or a jury votes not guilty. You still win, because those outcomes could have never occurred without you doing your job. 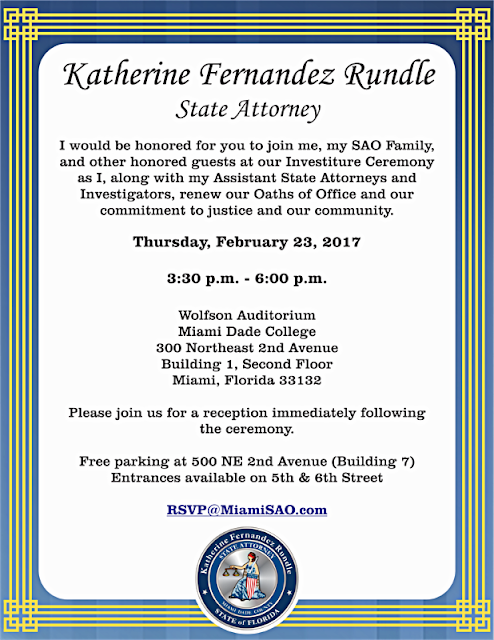 Posted by Rumpole at 5:30 AM
Email ThisBlogThis!Share to TwitterShare to FacebookShare to Pinterest
Labels: Katherine Fernandez-Rundle

Alan Dershowitz is speaking at KFR's investiture. He mentioned that he just came from lunch with DOM.

Wish those words, which in practice meant so much to so many, were still the guidelines today.

Checking to see how the community would react before making a decision is abhorrent -- but the guiding principle today.

Lawyers who love the battle of good v. evil are relegated to that subservient [though useful] category: Trial Horses.

The soul of the staff is no longer valued; unless they know famous or rich people who can help the regime stay in place. The world will be a better place when the next Investiture brings a new "Boss" -- whose arrow points to true North.

Dershowitz is a bad guy

Glad to see Kathy closed her office for basically half a day to feed her ego. Good use of tax dollars.

Why is she so bad?

Dershowitz is a tool

You've gotta be good,
you've got to be right.
You gotta bring the box,
You gotta hold it tight.

You gotta be firm,
but you can't be lost.
You surely can't squirm,
or you gotta pay the cost.

You gotta announce ready,
but you may not really be ready.
Then if the defense says ready,
just say you're not ready.

You gotta be gooood! YEAH!!!

It is such a tired line the worship of Reno and the hatred of KFR. Reno was a great person and we have not had an AG Since with her integrity. That said, Reno was the State Attorney when crime was totally out of control in this city. There were double the number of murders and robberies that there are today. German Tourists were being killed regularly by armed robbers. Kathy has been SA during one of the greatest drops in crime and has done many innovative things such as setting up states first human trafficking unit, insurance fraud unit. She disbanded the narcotics unit and increased the staffing of the career criminal unit. All the while Rick Scott destroying her ability to retain staff by giving no raises for 8 years and cutting all employees pay by 3 percent.
Not saying she or that office are perfect but all you whiners go defend a case up in Broward and try to reason with one of the robots employed by that office and you will realize it could be much much worse.

Most of the ASAs forced to attend this ego-driven event sat seething for two hours, as speaker after speaker reminded us of the wonderfulness of all that is her. It was regarded as an unnecessary imposition, not a pleasure. When the rabbi finally gave the ending benediction, the ex-judge celebrity who served as MC decided it was appropriate at that point to add another 10 minutes of her remarks.

The capper was that absolutely NO thought was given to what was ostensibly the purpose of the gathering, i.e., for the ASA's to be sworn in and have their oath signed by one of the several judges present. Rather than prearrange and announce that the judges array themselves in an organized manner so everyone could line up and do this quickly and easily, a mad crush ensued as ASAs scrambled to get out of there so they could then get into the fun of downtown rush hour traffic.

A good time was had by none. The comparisons made to Ms. Reno only reminded us that she would've never staged such an event.

KFR was no more responsible for the drop in crime than Reno was for the increase under her watch. Much greater societal forces were at play. If you give KFR credit for the drop, which occurred EVERYWHERE in the US, then you must give Reno credit also because she was the AG.

A toast to Kathy!