UPDATE: RESULTS & ANALYSIS ($$$$$) BELOW .....
As of 7 am this morning, more than 3.1 million voters had already cast their ballots in Florida.  Absentee Ballots received by the election departments' total 1.3 million and an additional 1.8 million showed up during early voting.  Broken down by party, it's 1.33 million Republicans; 1.22 million Dems and 560,000 with NPA.

Does the money spent make a difference?  What do our readers think?  Incumbent Judge Jacqueline Schwartz spent $380,884 on her campaign including $315,000 of her own money.  In comparison, Challenger Frank Bocanegra spent $93,124 including $32,000 of his own money.

NORTH OF THE BORDER
In Broweird, there were two races for Judge; one Circuit and one County.  In the Circuit Court race, Dennis Bailey defeated Rhonda Sokoloff 50.6% - 49.4% (4,300 votes); and in County Court, Incumbent Ian Richards has 177,067 votes to Challenger Claudia Robinson's 178,084.  They are separated by a quarter of a percent triggering a recount in that race.

Beginning in 1980 and continuing through 2004, over the course of seven consecutive presidential elections, a Bush and/or a Clinton appeared on the national ticket for President/Vice-President in each election.  The string was finally broken in 2008, when Barack Obama beat out Hillary Rodham Clinton in the Democratic primaries and secured the nomination of his party.  Two years from now, the cycle may repeat itself and we could again be talking about both a Bush and a Clinton on the national tickets of their parties ....

But for now, you'll just have to settle for a Schwartz and a Bocanegra. 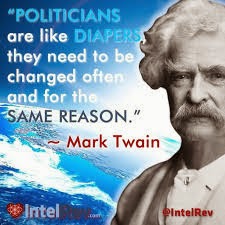 Many of you have already cast your votes either by way of Absentee Ballot or by Early Voting.  For those procrastinators who waited until today to vote, the important races, besides the County Court race alluded to above, includes the following matchups:

Does the money spent make a difference?  The final numbers are not yet in, but as of two days ago, here is what we know:


Will you be voting for the candidate who is or the candidate who was?  The choice is Rick Scott, the Incumbent, versus Charlie Crist, the former Governor, and current challenger.  Of course, if you didn't know that, well then, you must not own a television set.

Will you be voting for the Incumbent who has spent most of her elected time in office, (not to mention the valuable resources of her legal team), doing everything she can to make sure that gays cannot marry in the State of Florida or will you be supporting her opponent?  The choice is Pam Bondi versus George Sheldon.

Constitutional Amendment One: (PASSED WITH 75%)

AKA The Florida Water and Land Conservation Initiative.  It deals with our natural resources.

AKA The Medical Marijuana Amendment.  Backed and financed by multi-millionaire personal injury attorney John Morgan, this Amendment polled at around 85% for most of the Spring and Summer.  That was until millions of dollars of out of state PAC money coming from a few billionaires like the Koch brothers and casino magnate Sheldon Adelson funded the Drug Free America group attempting to defeat the amendment.  The latest numbers show about 61% support for this amendment; it takes 60% for the measure to pass.

For a more comprehensive analysis of Amendments One and Two, I'll throw it over to Mr. Cheeseburger in Paradise, who does a much better job than I could ever do at explaining these two very important Amendments:

AKA The Lame Duck Court Packing Amendment.  This amendment was addressed by the Tampa Tribune recently.  They described the amendment as one that was supported by " ... Republican legislators as a solution to a pending crisis on the Florida Supreme Court. Three of seven justices are expected to retire simultaneously in January 2019, just as a new governor could be taking office. But the amendment placed on the Nov. 4 ballot by the Legislature that would give outgoing governors carte blanche to pack the court on their way out the door is unacceptable. Amendment 3 is one more legislative attempt to push partisanship into the court system, and Florida voters should reject it."

Locally, the most talked about race is not about whom to select for County Court Judge; instead, it's whether to support a $393 million Bond measure which would fund a new Civil Courthouse to be built somewhere in downtown Miami.  Chief Judge Soto and a host of attorneys and judges have been hosting speakeasy type get-togethers to drum up support for the Bond as well as to raise money to finance the advertising campaign.  The current courthouse is something like 200 years old (j/k - it was built in 1925) and has 28 stories and three bathrooms.  The bond, if passed, would increase the millage rate by about 0.09, or $18, for a home valued at $200,000.

If you have not already done so, get out there today and exercise your right to V-O-T-E.

And because this whole damn election season has brought us nothing more than $90 plus million dollars worth of false and negative ads from both state parties and their funded PACs, we decided to leave you with this heartfelt moving story that took place this past weekend in Cincinnati, Ohio .....

Why was a Division III woman's basketball game between Mount St. Joseph's and Hiriam College that would normally put 50 fans in the stands instead moved to Xavier University's 10,000 seat basketball's arena; (PS. they sold out the 10,000 tickets in just one hour)? Read the story and watch the video here.

No on all county court issues (keep our parks as parks) Except YES for a new Courthouse.

I am personally so happy that the new civil courthouse vote went down in flames. It was disorganized, not compelling to the average non lawyer non judge voter … and people don't care about civil lawyers.

The $800k raised by the lawyers won't go to waste -- it built up good will for their firms with the judges pushing them for funds! judges don't forget who gives -- and more importantly they remember who did not give! beware going forward folks.

i am glad that Charlie Crist lost … nice guy, but a phony and not sincere. He will say he believes in anything if it will get him elected. David Young
and Hector Lombana now have to live with the wrath of Governor Rick Scott for 4 more years -- so goes any perceived power in the selection of judges for these lawyers. Bye Bye guys!

Florida Supreme Court will be filled with some great Judges. based upon Rick's picks!

All in all, I am thrilled with the results -- and to put the cherry on top of the cake -- 4 more years of Pam Bondi -- and then she will be the next Governor!!!!

PS: poor Jeff Feiler. The greatest nicest guy in the world, but he was on the wrong side of the marijuana amendment! How does that effect the money paid for franchises that he was selling?

David Young says on his Facebook post that he is going to apply to be a Senior Judge now -- but, the Florida Supreme Court REQUIRES that a retiring Judge apply within one year.

The Supreme Court must, according to its own precedent as set with other judges, DENY his motion.

That is the rule that they set for other judges who applied after several years of leaving the bench - and that was the ruling.

Judge Schwartz told the Miami Herald, on her victory:

“I think my re-election is a very significant victory for the people of Miami Dade County,” Schwartz said Tuesday night in a statement. “We have gone past the days when any nondescript Hispanic name could go on the ballot and defeat any Anglo sitting judge.”

She added: “I am proud of the voters of Miami Dade who have shown that they can cut through all of the subterfuge and actually recognize the qualification of a sitting good judge.”

Shumie time for the democrats and the new civil courthouse.

Oh yeah. And SHUMIE time for bocabegra and for all of us because he lost. He had a chance and he blew it.

How about a big ol shumie for Jeff Feiller? His plans blown sky "high".

In the event Miss Regaldao visits DCC, can anyone recommend a good criminal defense attorney?

What does it say about Achwartz' ability to make money in private practice when she has to spend 3 times what she makes in one year as a judge just to have a job? disgraceful and I do not practice in Kiddie Kourt.

So I guess there is justice in that Jackie Schwartz had to spend over two years of her salary (315k) just to keep her job.

Maybe she learned her lesson. Then again, maybe she just doesn't give a crap. At least she spends most of her time in branch court where she cant do too much damage.

What a stupid thing to say. She's still as dumb as when she carried Yale galanters brief case and did his mop up work.

Can I hope that 10:34 was being sarcastic?
Use the /s/ sarcasm code next time