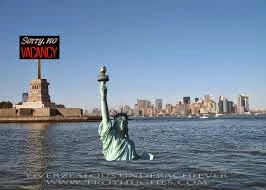 The Islamic State in Iraq and Syria ISIS is the best funded terrorist organization in the world. The fall of Mosul, the second largest city in Iraq may have netted ISIS over $400 million dollars from looting the Central Bank of Iraq. With ISIS's goal of killing ever non-Sunni Muslim,  Syria and Iraq can never be pieced back together. A decade and half of violence since 2001 has shown that Sunnis and Shiites will never co-exist. Iraq has been a see-saw of retribution, with one faction exacting revenge when in power. Back and forth it went- Saddam Hussein  led Iraq's minority Sunni population for decades, oppressing Shiites and Kurds. The invasion of Iraq and subsequent election put the Shiites back into power, and revenge was exacted on the Sunnis. Now the Sunnis are fighting back, exacting revenge on Shiites with predictable atrocities.
Humpty Dumpty had a great fall.

Americans view the ethnic violence from afar with disgust and superiority. We are, after all, a nation of immigrants. A melting pot. "Give me your tired, your poor, your huddled masses yearning to be free..."

Item: In 2010 Arizona passed a "Safe Neighborhoods Act" requiring all immigrants to  register within 30 days of entry into the U.S. and carry those papers with them "at all times". Failure to comply was a crime.  Police were authorized to stop any individual  they thought was an immigrant to check their papers. In 2012 the U.S. Supreme Court upheld most of the law.

"The wretched refuse of your teeming shore, send these homeless, tempest-tost, to me...."

Item: In the wake of Arizona's law, Alabama passed a law requiring children and parents to show immigration papers before children can enroll in school. Alabama also criminalizes most contact between citizens and illegal immigrants. Police are authorized to stop people under suspicion of violating the law and demand that they show papers authorizing their presence in the U.S.

Item: Civil rights org reports here:
This toxic environment, in which hateful rhetoric targets immigrants while the number of hate crimes against Hispanics and others perceived to be immigrants steadily increases, has caused a heightened sense of fear in communities around the country.


Item: Breitbart reports here:
In a one-hour video called 'Clanging of the Swords IV,' ISIS showcases what it appears to believe is the best the group has to offer to anyone interested in joining: mass executions, vividly documented drive-by shootings, and romantic background music about the greatness of Allah. The video is extremely graphic and difficult to watch...

"I lift my lamp beside the golden door."


Posted by Rumpole at 8:40 AM
Email ThisBlogThis!Share to TwitterShare to FacebookShare to Pinterest

rumpole you a thoughtful, smart and entertaining. why are you anon?

Jury selection resumes in the Rolle trial. It ended Wednesday with a well placed "go fuck yourself" from the defense to the state. Might be worth watching.

Yes, the United States has no interest in preventing those who immigrate illegally from prolonging the wait for those who want to immigrate legally, not is it just to do so.

The US has no responsibility to its poorest citizens, particularly its African Americans, to prevent massive amounts of under-minimum-wage workers from taking entry level jobs and driving down real wages.

The US has no responsibility to its overworked public school teachers and hospital staffers to ensure that they are fairly compensated, no interest in making sure that students and patients are paying taxes that pay these salaries.

The US has no interest in securing borders from foreigners who actually wish us harm. Lord knows when I lived in lower Manhattan in 2001 the dust that came through my windows was nothing to bother about.

No... any efforts to halt the millions of people entering without bothering to follow established rules must be RAYCIS!!!

Good God, when can we have reasonable debate in this country without white liberals accusing or insinuating that the other side is racist?

I'm not angry Girl, but I'd like to get some things off of my chest:

I hate the show Rizzoli and Isles. And it's everywhere on cable.

I don't really get the world cup, but I can live with it. But then I hear the goaltender for Brazil in 1950 is still reviled for letting in one goal against Uruguay. 64 years later!!!! Let it go already.

I have to agree with AG: the scenes at the movie theaters are sad and bizarre. You have people who are so overweight they cannot fit into their seats, contentedly sucking on gallon size diet cokes, which they think gives them the right to eat 5000 calories worth of popcorn. 80 minutes into a movie and I still hear and see the rhythmic munching of food. Checks puffed out, greasy hands going in to the bucket then into the mouth then into the bucket. It is indeed sickening.

I agree with Rumpole that men having to wear jackets and ties in court in south florida in the summer is downright stupid.

Illegal or unusual immigration is what made this country great. Slaves were the great resource of labor that was the basis for this countries initial wealth. The chinese,italians and irish, who were considered even more subhuman than the Africans, did most of the great labors of the last 150 years. Recently mexicans and other latins have provided the labor for the American middle and upper classes. In all cases the deal is you come here in great numbers and do the basic labors and you're children eventually move into the mainstream of sweet American life. It is this system that has fed the Rise of the American economy not "legal immigration". Legal immigrants don't do shit other than fill out applications and stand in lines. The current crop of illegals are couragious, resourceful and risk their lives to work in the fields and slaughterhouses. It is that courage and work ethic that makes America great. I'd much rather go to war side by side with the guy who crossed the florida straights with a boat he made out of a 60 year old car,gum and spit than the pissant who fills out a paper and wins a lottery while fanning his ass. I don't know wether 9:10 is a rascist but I do know he or she is an ignorant idiot. Advancing the argument that illegals are and have been the enemy of African Americans is an insult. When you look at the people who hate the black community they are often the same ones that hate the "illegals". I'm sure you believe that voter fraud and the black panthers were the reason Obama won the elections.

Last night at Ren (a venue) A-rod held court in the back, the chef made his famous arroz con lechon from his cocina criola and a bevy of Miami's best beauties danced the night away. Tonight at Ren?
World Cup! USA All the way!

50 cent shots and $2 dollar bucket of mini-buds at Ren (a venue) whenever USA scores a GOAAAAALLL!!!

2-1 USA scores another goal and I just did 2 shots. One more goal and I won't make it home.