THE MAN IN THE AREA 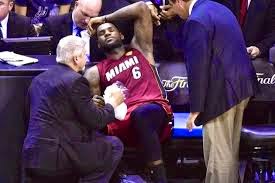 There he is. The man in the arena. Broken but unbowed. Courageously playing a game through pain, obliviously to his discomfort, thinking only of the team. The heroics of it all! The inspiration this will provide to generations to come. One can almost hear the sergeant on some distant, foreign shore, in some future war, rallying his troops, screaming about the great one, playing through pain.

Somebody give this man a raise! He's earned it.

THE NUN IN THE ARENA
Speaking of great competitors, this NUN WON Italy's version of The Voice last night, singing a rousing version of "What A Feeling" from the movie Flashdance.


Oh what a feeling, to rise above adversity. To compete, per chance to win, no matter the odds, no matter the humidity level.
All of Miami is a better place today, because of the heroics of our hometown champs.

If you can pull yourself off the couch in what must be a stunned stupor of admiration for that spectacle, go outside and enjoy a beautiful spring like weekend. Monday is always around the corner.

Posted by Rumpole at 8:07 AM
Email ThisBlogThis!Share to TwitterShare to FacebookShare to Pinterest
Labels: Miami Heat, Singing Nun

I still say the Pacers are beating the Spurs in six. What do you think, Rump?

You're so blinded by your distaste/dislike/disdain for this team, and James in particular, that you relish in someone's physical-medical disability (albeit not permanent). If Duncan cramped up and his legs turned to stone during a game, and had to be helped off the court you wouldn't say a peep about his toughness. If Diana Nyad's legs cramped and couldn't swim and she drownd would you offer her some Midol to fix it?

You don't like James, fine. Go ahead an pick on the guy for leaving Cleveland, his salary, it grimace, his headband, whatever. I'm surprised you've lowered yourself to attack him for a medical problem.

cysco kid is fast with the six gun

9:12- first I must admit you are correct. In the entire country of sports fans, I am the only one to stoop low enough to make a negative comment about this professional athlete getting a cramp. I am ashamed.

I do wonder however how Tim Duncan, who is about 20 years older than Lebron managed to play the whole game without a cramp. Probably some San Antonio cheap trick, like water or even worse- Gatorade. For shame on me and San Antonio.

In the interest of 'getting the facts straight'. ESPN reported that James asked to return to the game, but Coach Spoelstra refused his request. Even if the Heaters lose to San Antonio, their accomplishment of making 4 consecutive finals is pretty impressive. I am not much of a sports fan, but it's tough to ignore what they have achieved. Why not enjoy and take pride in what the hometown team is doing. Isn't it sort of lonely to be from Miami and yet continue to bash your local guys?

Think how Don Shula would have handled so spoiled offensive lineman in the 4th q of a game in the OB in September who took himself out of the game for cramps?
Cut the next day for sure.

In some weird way the singing nun is kinda hot.

I agree that any athlete who does not play through any injury or debilitating condition is worthy of contempt. I must point out to you that under this standard Willis Reed and Joe Frazier are pussies. Willis made a brief appearance and then retreated from the game and Joe quit in the 14th. Mike Jordan made a big deal about a flu and conducted himself in an effeminate manner throughout the game, what with the whimpering and toweling in public. You must agree that these were shameful displays. Certainly not the way John Wayne would've done it.

If you're going to write churlish posts, learn to spell. Your "headline" misspells the word "arena." The real Rumpole -- and you are definitely but a sour impostor -- would look at you and this this childish blog and say: "There he is. Giving me a look of vague disgust. Like Queen Victoria with a bad period." Then he would say GO HEAT. Get over the fact that neither Riley nor James wanted anything to do with your dysfunctional knicks.

The headline to the post is intentionally misspelled to give you pause and reflect that Lebron is anything but Roosevelt's man in the arena. Sorry that the humor was a bit above you. I'm sure you can go play in the crass comments of the JAA blog if that is more your intellectual level.

I hear that Judge Nuria Saenz left the Coral Gables dockets in a mess......there are thousands of cases that were not heard because she didn't work for 2 months .....I also hear that the PIP lawyers in North Dade are ready to jump off a cliff cause she is going there!

Loyalty to your friends is an old and revered trait among Cubans .....Fear the Unions PBA, FOP, Electricians, Plumbers, AFL-CIO.
Bill Altfield is a good man and judge who dodged a bullet God Bless Him.

FYI that is wacky jack on fire but not esquire at 1:09 pm.

Rump- second date tonight with the owner of Brindash the Cat. All thanks to you buddy. You da blogging man

Lebron clearly called a shumie. The question is whether he had to do it or not.

Not Jack. Just an esquire who knows how to spell, knows real humor and satire, and finds RumpHole to be childish in the extreme. OK. We get it -- He can't stand the fact that both Pat Riley and Lebron James rejected his beloved knicks. Unable to contain his jealousy, he makes puerile attacks against them and their team.

Rumps. Your misspelling explanation makes no sense, but I expected nothing better. Go back to plagiarizing others -- like your expert commentary on cooking steak that was lifted directly from the New York Times. At least they can spell and make sense and if you plagiarize accurately, you might too.

Saenz is already at N. Dade and by all accounts she is very efficient.

BTW, Duncan isn't as muscular as Lebron, therefore no cramps. And he isn't twenty years older than Lebron. Idiot.

If youre going to ignore anything that happens at REG, at least stick to literature.

see 4:46 is wacky jacky because he is stupid enough to always refer to rumpole as Rumphole.

I remember that dude. Said Janet Reno battered him. She kicked his ass in the election and then became atty gen and he like lost what little he had of his mind and said he was on a mission to stop video games and then failed at that and then Dava disbarred him. Strange dude.

You can't stop reading jack. But I can stop you from posting. Be gone evil spirit!!!

"Spring like weekend?" Are you kidding me? It's friggin HOT out there.
Miami does have 4 seasons; it's just that fall, winter, and spring are from Nov-Feb. The rest of the year it's SUMMER!

Caught ya again jacky boy. I'd tell ya to prepare for work monday but.... Oh well.

Please Jack. Go bother someone else!