Seventy years ago today was the day of days.

When people are asked about meeting a person from history or being at a historical moment they will say things like they want to meet Jesus, or be at his resurrection,  or at Kennedy's inaugural address or at the launch of Apollo 11.

To be a member of the 101st or 82nd Airborne, or the British 6th Airborne division. and see Ike walking the line of young men, their faces black, about to get into airplanes and jump into the night sky over occupied France. 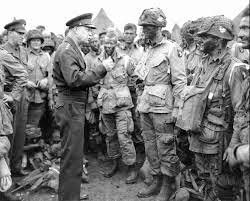 To come ashore at bloody Omaha Beach or scale the cliffs at Point Du Hoc with the 1st Rangers Battalion. 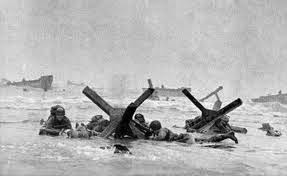 To see the greatest armada ever assembled, and watch 100,000 men on the greatest day in the history of the modern world. The invasion of occupied France marked the beginning of the end of the Third Reich. 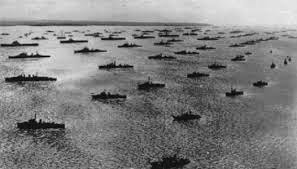 But success was far from assured. If the invasion had failed, and it almost did in a hundred different ways, Hitler might have been able to sue for peace on the Western Front, allowing him to concentrate his forces in the east and battle Russia into a standoff somewhere in eastern Europe. The US would have turned its attention to the Pacific and who knows what appetite England and America would have had for another cross channel invasion in 1945 after several years of war? The world might look like a startlingly different place if brave men hadn't fought and died for freedom in places like Ste Mere Eglise, and what is now called the Pegasus Bridge over the Caen canal outside of Benouville, France.

In his book "The Pegasus Bridge", author Stephen Ambrose argues that fate of the entire invasion hung on the British 6th Airborne's ability to hold the two bridges over the Caen Canal and Orne River. Major John Howard commanded D company of the 2nd Oxfordshire and Buckinghamshire Light Infantry (Ox and Bucks) Brigade.

D company had the distinction of being the first allied forces to land in Normandy, a few minutes after Midnight on June 6, 1944. They came by glider, and their mission was to capture and hold the two bridges until relieved by additional airborne forces at D-day + 3 hours. If the Germans re-took both bridges, then they could have set up a defensive perimeter with Panzers that would have made it impossible for the 6th Airborne to re-take the bridges.  Colonel Hans Von Luck, commander of the 125th Panzer Grenadier Regiment of the 21st Panzer division later contended that if he had re-taken those bridges, he could have thrown his regiment of tanks into a late D-Day afternoon counterattack that would have made it to Juno and Sword Beaches. 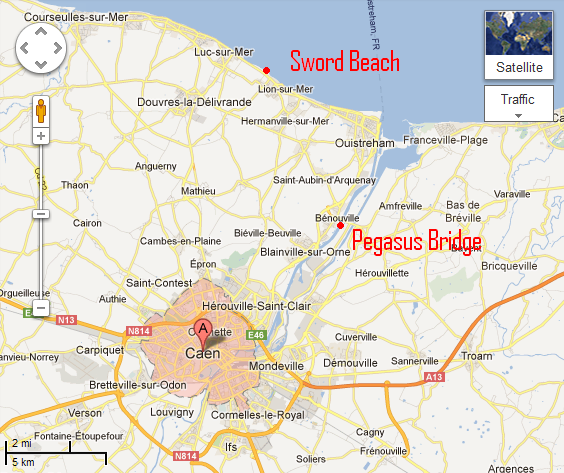 A Panzer regiment behind the lines on the beaches would have rolled up the entire invasion, destroying all the equipment being unloaded.

At  about D-day +1:30, or 1:30 in the morning of June 6, 1944, a squad of six Panzers slowly approached the bridge over the river Caen that D company had taken an hour before in a daring raid. D company was no match for German tanks. Sgt. M. C. Thornton had a small, hand-held Piat rifle which shot, when it worked -which was not often, a small anti-tank missile.
Major Howard placed Sgt. Thornton at a t-junction just before the bridge. The first of six mighty Panzers cautiously approached the bridge. Sgt. Thornton sat quietly, his hands shaking, his heart beating out of his chest, as he watched the tank approach. He would have one shot. He and his entire company had trained for this night-this moment- with a singular purpose for the last two years. If he missed or the gun mis-fired, the Panzer's guns would surely take him out and then the tanks would roll unobstructed across the bridge.  The Piat had a range of 50 yards, but really wasn't effective outside of 20.
Thornton waited.

Ambrose speculates, although Thornton couldn't have known it at the time, that the fate of the entire invasion hung in the balance. Failure to destroy the tank would have led to the Germans retaking the bridges. This mission had been given top priority over all other D-day missions. Allied command knew the value of those two bridges. Thornton fired, the tank went up in flames, the other Panzer's retreated, fearing they were facing a superior force. The bridges remained in British hands and Von Luck's Panzers never had the opportunity to drive to the beach and stop the invasion.

When Ambrose interviewed Sgt. Thornton many years later, Thornton told him not to make him look like a hero, to which Ambrose replied: "I don't make heroes, Sgt., I only write about them."

There are a thousand such stories on June 6, 1944. The day of days. The most important day in the history of western civilization.

We would have given anything to be there. We were born a few decades too late.

Posted by Rumpole at 12:01 AM
Email ThisBlogThis!Share to TwitterShare to FacebookShare to Pinterest
Labels: D-Day

Ironic isn't it that the Heat cannot play in the Heat. If you can't stand the heat....get out of the playoffs.

Willis Reed coming out for game 7 on a broken leg.
Gibson hitting a pinch hit home run in the world series on a broken leg.
Tiger Woods winning the US open on a 18 round playoff with a broken leg.
TE WInslow for the Chargers putting on show in OT in the playoffs against the Dolphins in oppressive heat. Exhausted, but not willing to give up.

Ali/Fraizer round 15 Manilla. Both ready to die.

Lebron James, poor baby, it was too hot for his delicate constitution so he decided not to play.

If I was a heat fan- and I am not- I would have been screaming- "drink some f'ing Gatorade and get your ass out there."

Maybe the NBA will put in a new rule on heat and humidity in the future so poor baby won't have to sweat so much.

Superstar? No heart. You can have him. He's no Reed, or Gibson, or Winslow.

It's easy to see that you that have never had leg cramps. I have, and could barely walk, let alone play professional basketball. It's also very predictable that you would use the opportunity to take another cheap shot at Lebron. By the way, as I recall, your hero Willis Reed played for about two minutes before sitting on the bench with his injury--just like Lebron. Liked the D-Day post though.

I am not a professional athlete. Although I am often mistaken for one. I am a professional trial lawyer. Which means I have tried cases with the flu , with a broken foot in a cast, with a blinding headache, with a bout of intense back pain that required me to stand through the entire trial. In short - I am a professional and when called I answer the bell. Like Ali and Frazer. Like Kellen Winslow. Like Willis Reed. Like LC Greenwood who unplugged an IV while hospitalized in New Orleans and with pneumonia took a cab to the stadium and played in the Steelers first Super Bowl.
Like hundreds of other athletes who overcame serious injuries and played the game. Even George Brett who played with a bad bout of hemmroids.

Unlike Lebron who when the going got tough, quit. Face it. He's a quitter and now he's been exposed.

Rump, you can't have it both ways. Whenever the Heat loses, you come out of your Lebron-hating hole and criticize him. However, when he does something great, the church mouse side of you is evident. Stick with law, fellow, and whatever else you're good at.

They Were Winning Went He Got HuRt. HOw Can You Call Him A Quitter? It Was 102 Degrees On Court. World Class Swimmers Drown All The Time From Cramps. They Are No Joke

I don't have it both ways. When the Heat win I post all of the snotnosed comments from the front running phonies who pretend with exasperated glee that they have been following the team their whole life and always will.

And when they lose, I give my reasoned view of the events. And my reasoned view today is that a quitter never wins and a winner never quits. And what you saw last night was an alleged superstar quitting. Shameful. He couldn't hold the jock strap of Jordan, Jabbar, Bird, Worthy, Magic, Russell, Havlecheck (sP?)
Monroe, Vlyde Frazier, Reed, and even Kevin McHale. I'd even take Darryl Dawkins over le baby. Certainly Moses Malone. Shameful to quit. Just disgusting.

Great post. Hopefully you've had, or will have, chance to visit the area.

For a great read, and a different perspective on the US military performance, buy The Boys' Crusade by Paul Fussel.

Give credit where credit is due--it was the 2nd Ranger Battalion at Point du Hoc. The 1st Rangers did not participate in D-Day, they were still busy in Italy.

Rump, I was a high level athlete...i competed with broken fingers, sever sprains, concussions. Cramps my friend are very different. When you cramp...severe cramp... it does not matter how much you want to compete, your body will not because the offended muscle is essentially locked. This, is why people drown when they cramp. By your twisted and ignorant logic, all those drowning victims must not have really wanted to live. Stick to doughnuts and baseball bug guy. You are like listening to the female sideline reporter discuss how a helmet feels in a football game.

Wow, it truly does take a washed up jock to misspell so many words, use bad grammar and insult fat people and women all in the same comment. Well done.

Kobe Bryant shredded his Achilles' tendon. And he stayed in game and made two free throws before limping off the court. Poor baby Lebaby. He had a cramp. Maybe his mommy will give him some wa wa and make it better.

Thank you for finally definitively proving that you have no understanding of the human body and how it performs in high stress/impact sports.

You are the kid who plays video game football 10 hours a day and thinks he is ready to go play receiver in the NFL.

Michael Jordan left the game with cramps in Game 4 of the 1997 Finals. Guess you need to add him to your list of pussies like Lebron.

Cramps are more debilitating than broken bones. The fact that you don't know that proves that are completely ignorant or just insulting our intelligence.in any event LeBron is the greatest basketball player in history. Whatever he does is by definition the right thing to do. No other basketball player in history can carry his jockstrap.the fact the YOU and the rest of the haters can think and talk of only him proves this.

RUMP YOU are absolutely right.these athletes are pampered.look at Kobe and Derrick Rose. They get paid millions and yet take years off with injuries. These men are pussies they need to get back out there in spite of any injury. Havlicek would never have taken time off for some injury.