Welcome back from your Thanksgiving  long weekend. If you listened to our advice over the weekend, you stayed out of Walmart, will stay out of Au Bon Pain, and you picked up and read Julian Barnes'  "A Sense of an Ending": a powerful novel with the stunning ending that leaves you feeling blindsided and yet brings you back to the first few pages which, after re-reading along with a few other parts of the novel, has you sheepishly admitting  you should have seen it coming .

BAD NEWS: The Florida Supreme Court held here that Padilla is NOT retroactive.
The long awaited decision in Hernandez v. State was issued the day before Thanksgiving, bringing holiday cheer to ICE agents everywhere in Florida, but devastating the hopes of thousands of foreign national  Floridians  struggling to remain in the U.S.

It continually astounds us how appellate courts twist themselves to avoid making major criminal procedure decisions retroactive. It's as if they have no concern for the the tens of thousands of defendants sitting in prison or having convictions that under todays rules would never stand.

And that brings us to the dissent, first published on DOM's blog last week, that should be required reading for all new appellate judges. The  dissent by Judge  Hill in Rozier v. U.S.  is so powerful, that we just couldn't help ourselves from repeating the excerpt that DOM first blogged:

I reluctantly conclude that our court is determined to deny relief to everyconfined habeas petitioner whose sentence has been unlawfully enhanced under either the career offender guideline or the armed career criminal statute.
***
I must confess I am bewildered that both the United States, through itsDepartment of Justice, and this court appear to rejoice when access toconstitutional protection for the correction of admitted and highly prejudicial error is found to be blocked by unmet procedural “safeguards.” On the contrary, I should have thought that the correctionof such error would be celebrated by all sworn to uphold the Constitution. As is inscribed in the office rotunda of the Attorney General of the United States, “The United States wins its point whenever justice is done its citizens in the courts.” Some in the Department of Justice seem to believe that the inscription reads, “Justice is done when the United States wins.”
Clearly justice is not the intended beneficiary of these procedural safeguards. On the contrary, the safeguards are designed to protect finality. If these new rules require that finality trump justice, then perhaps, as one member of this panel has opined elsewhere, they are unconstitutional. In any event, I cannot join in this elevation of form over substance; of finality over fairness. Due process is the defining virtue of our system of criminal justice. But we should ask ourselves why. Is it because it achieves finality? Or is it because we believe that, more often than not, we will reach a correct result where certain process is due the criminal defendant. The goal is a correct result – not simply the provision of process. To be sure, we do not guarantee a correct result. But where all know the result is error, to adhere to the process as though it were the end goal is unfair in the purest sense of the word.
This is especially true where the petitioner is in federal custody, not state custody. We safeguard finality for state court convictions out of respect for the dual principles of comity and federalism. Neither of these considerations is due the erroneously sentenced federal prisoner. It seems to me that the majority has striven mightily to avoid granting the writ to someone currently deprived of liberty in violation of law. I am weary of our court’s relentless effort to put more and more procedural angels on the head of the habeas pin. At some point, we must concede, as the Seventh Circuit did recently, that common sense and basic fairness require that we correct these unlawfully enhanced sentences. See Narvaez v. United States, 674 F.3d 621 (7th Cir. 2011).

You tell em Judge Hill. You wrote so eloquently what many of us in the field of criminal defense have felt for so long. Well done
Judge Hill, well done indeed. 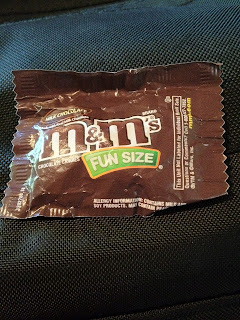 What the hell makes this a fun size? It's small and all it does is make you want to eat three or four more. Nothing fun about that.

See you in court.
Posted by Rumpole at 3:30 AM
Email ThisBlogThis!Share to TwitterShare to FacebookShare to Pinterest

sorry about comment verification but when I turned it off I started getting a bot attack of 50 spam comments at a time. Interestingly, it is on a very old thread, but I still need to spend five minutes clearing them, so I had to turn it on again.

No shumie time today- first day back from long weekend.

112 die in Bangodesh Fire in Factory that made clothes for Wal-Mart. NO Fire Exits. But Workers were paid .15 an hour ( yes 15 cents and no Benis). Wal-Mart had a internal report on the dangers of the factory last year.
This is what caused the American Labor Movement, Not Socailism.

Well, I'm glad someone "gets" Sense of an Ending. I read it, twice, my wife read it and her book club read it. None of us gets it, and some of us are pretty smart (although there are no trial lawyers in the group). I'd love to know what you found that lets you get it. If you want to reply privately, and not reveal the ending to your readers, can you reply to emarkrobbins@Yahoo.com and not publish my email address? Thanks, Mark Robbins, Houston, TX,