It's been raining in Miami. Who moved us to Seattle?


If you haven't been reading the JAA blog, you're missing non-stop-relentless reporting on the absences of County Court Judges from their Broweird courtrooms.  Judge Robinson has been out eight days in a row. Judge Diaz had one case on his calendar Thursday  and then the JAA blogger/reporter snapped a cell phone pic of the peripatetic Judge in the elevator on his way to finding a felony trial for his interns to watch. 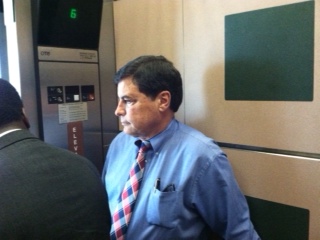 
And people think we give robe readers a hard time.


George Zimmerman's bond was revoked for having more money than he said he had. Why can't we have clients like that?


SHHSH....
Lots of "hush-hush" meetings on all sorts of things REGJB related. From getting into the building, to getting paid, we're on top of it all.


BAN ON SODA
NYC Mayor Michael Bloomberg is promoting a NYC wide ban on sugary soda drinks sold in containers over 16oz. Why? Two reasons.
1) Sugar is a dangerous substance that is addictive and kills; 2) Bloomberg obviously reads our humble blog.


The Heat have every reason to believe the referees took note of Boston's vociferous complaints that Miami's superstars were given preferential treatment and made the necessary adjustments. In Game 2, LeBron was not whistled for his first foul until there was 3:23 left in the third quarter. On Friday night? The whistle was blown on the league MVP a mere 32 seconds into the game.


Ah, but we digress.


In the wake of a resounding 101-91 Game 3 Boston victory, there's evidence this series can be competitive going forward, and that has nothing to do with how the games will be called.
It's all about Boston's defense and its ability to contain (within reason) two of the most lethal slashers in the game. It should come as no shock the Celtics' effort was anchored by two people in particular: the redoubtable Kevin Garnett and the mercurial Rajon Rondo , who followed up his magnificent Game 2 for the ages with a satisfying double-double (21 points, 10 rebounds).

Posted by Rumpole at 8:30 PM
Email ThisBlogThis!Share to TwitterShare to FacebookShare to Pinterest

Nothing specific to this particular post. But does Domestic Violence Administrative Judge Carroll Kelly ever have court? Seems like every time I have something scheduled in her division, it's being handled by someone else. Can someone let us poor schleps know?

Gelin is borderline stalking Diaz. While I like what he has done there in Broweird in general, I think he has gone off the reservation on this one.

While I must agree that Friday is a poor day for verdicts, it is an excellent day to play "let's make a deal." That is unless you subscribe to the Rumpolean maxim of "never plead guilty."

I do not like that diamond patterned tie. The blue shirt is rumpled and does not fit and the collar is unbuttoned which is an unpardonable fashion faux pax. Oy vey he is a sartorial sad sack. What a mess.

"Never plead guilty!" is my maxim. You Miami boys need to come to SF in the 1950s and I'll show you how it's done. By the way, who the hell is Rumpole and what the f--k is Shummie time?

The DV judges rotate and you can get a different judge for bond hearing, arraignment, sounding and trial.

DV has only 3 criminal divisions and 7 judges.
Kelly has a named criminal division. So does Del Pino and Multack.
Leban, Rubenstein, Davis and Cannava rotate into criminal.
Kelly also has a dv civil division for restraining order cases.
All the dv judges rotate criminal calendars but the notices never change and say only Kelly, del Pino or Multack.
So, you never really know which judge you will see in dv criminal court , despite what the notice says.
It is confusing.

I just got a not guilty a week ago Friday. Verdict came back at almost 7:30 in the evening, six hours of deliberation.

But I agree. If there was any way to have prevented the jury from deliberating on a Friday, I would have.

Not to mention that I was so tired I couldn't even go out to celebrate the victory.

I'm addicted to soda (regular). Aby suggestion on how to kick the sugar addiction?

If you want to get off soda, get an rx for topamax. It makes the soda taste unbearable.

So it was happy hunting for me, as usual, at some BS law school jobs fair. Tons of sweet law students looking for some break into the job market. I nab this smoking tall blonde, going into her second year, almost six feet tall, Connecticut blue blood wasp. And when I get her into my 911 she starts making snide comments about a fake sports car and a mid-life crisis. She sneers at my pad on Grove Isle and my 43 Cabin Cruiser and when I take her home I see why. She's in a penthouse on Brickell - three stories. A private garage holds her Ferrari. Her dad runs a a few hedge funds and is paid over 500 million annually. She spends more on maintenance of her cars and penthouse then I earn, and I earn pretty good.
Man did I feel like a fool. It even took the edge off of what could have been great sex.

Just goes to show, there is always someone out there with a bigger...um, bank account.

So if the only way you can attract a pretty young girl is with the perception of wealth, you just may run into that situation from time to time.

Start hanging out in Hialeah. The newly arrived refs are still impressed by the Carrera.

Does it matter in the least what judge is on the bench in DV?

As far as the criminal side goes, I've never seen a bigger waste of taxpayer money, than to have a separate court for these cases. In 10 years I've never had to pick a jury there.

Yeah " trial lawyers" like you probably never pick a jury anywhere and just take the money and plead them out.

If we are talking about a waste of money..
Too many defense attorneys plead winnable cases. Fast bucks.
PD's try cases. Everyday, everywhere.
The jury trial is becoming extinct.
Not because of the PD's....

In the past six years I had one client take a plea in DV. All the rest have been nolle prossed, or have accepted PTI.

And don't tell me how only PDs try cases. There are plenty of us private attorneys who try cases on a regular basis. Dont get defensive. And don't be jealous that we make as much for a misdemeanor as you make in a month. You will have your time to do the same.


The point is that of all the cases I have tried, none of them are in DV. They all take place in REG.

And please explain to me why in Dade you can punch a complete stranger in the face, and get a withhold and court costs, yet if you punch your spouse who is pressing your buttons every day, you get a litany of punishments, including drug and alcohol evaluations, when the facts don't warrant it.


Why do so many cases get nolle prossed there, despite specialized treatment?


It is a waste of taxpayer money. Period.

So sad. So damn sad.

I have to admit, on some strange level, I am attracted to angry G.

For me, the 2012 Dolphins strongly resemble the 71 Chiefs, the 67 Vikes, and significantly, the 84 Dolphins, who Marino took to the Super Bowl.

An AFC championship game and a record of no less than 13-3 is easily attainable for these Dolphins. Just crunching the numbers.

Does the ban include diet soda?

So Connecticut blue blood trust fund baby spent the weekend. I may not be able to impress her with my money and toys, but I can still deliver the mail better than any 24 year old pimply faced boy that she mingles with.

I'm not sure where this is going though. it was one snide jibe after another. About my gold presidential rolex she passed a comment that all the partners in her the firm that handles daddy's hedge fund wear Patek's or Vacheron's and if I was going to slum wearing a rolex the least i could do is get a platinum one.

My porsche is pedestrian compared to her Ferrari and my cabin cruiser is smaller by a factor of eight compared to her daddy's yacht which they often take to London or Bermuda.

I'm telling ya Rump, I've more than met my match with Ms. Blue Blood. I'm gonna dump her and go back and nab me a nice 3L who is 100K in debt and appreciates a good meal at Smith and Wos.

Smith and Wollensky is a shithole! The food is mediocre and the service is terrible. You aren't going to impress anyone if you are taking them there.

Then he woke up