GET OUT THE HANDCUFFS ??? HAVE THE DIAZ DE LA PORTILLA BROTHERS BROKEN THE LAW ???

CALL SERAPHIN AT 305-xxx-xxxx AND TELL HIM TO COME CLEAN. 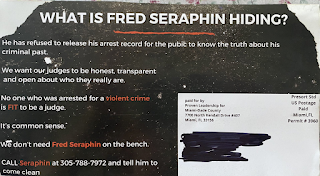 Proven Leadership For Miami-Dade County is a registered PAC formed under the laws of the State of Florida, Department of State, and founded on April 18, 2018. The candidate it was formed to support is current City of Miami Commissioner Alex Diaz de la Portilla; (at the time the PAC was formed he was a candidate for District 5).

On July 21, 2022, just a few days before the mailer was sent out, the PAC disclosed an Expenditure in the amount of $10,400 payable to the United States Postmaster.

On July 22, 2022,the PAC disclosed an Expenditure in the additional amount of $9,211 payable to the United States Postmaster.

On July 22, 2022, the PAC disclosed an Expenditure in the additional amount of $10,000 CASH as a Political Contribution to ... wait for it ...Local Leadership For Miami-Dade County, a State of Florida, Department of State, officially registered PAC. That PAC was formed on June 1, 2020, to support then Miami-Dade Commission candidate Renier Diaz de la Portilla.

As an aside, on August 1, 2022, the Department of State sent a letter to the Renier Diaz de la Portilla PAC advising them that they were investigating a violation of Florida law in that PACs are not permitted to donate nor accept CASH donations exceeding $50. They have asked the PAC for an explanation with a deadline of seven (7) days from receipt of the letter. As of today, no response has been filed by the Renier Diaz de la Portilla PAC.

THE LAW IN FLORIDA

(d)1. For purposes of this paragraph, the term:

(2) Any person who willfully and knowingly violates:

So, returning to our Query: Has either or both Renier and Alex Diaz de la Portilla committed a Misdemeanor of the First Degree when they willfully and knowingly were responsible for sending out a hit piece against Judge Seraphin that included Judge Seraphin’s cell phone number?

This is a Criminal Defense Blog, so let’s hear from our criminal defense attorneys.

We also turned to local attorney JC Planas and asked him the same question. Planas has already filed Bar complaints and JQC complaints against candidates Reiner Diaz de la Portilla, Teressa Tylman (Cervera), and Mark Blumstein.  Planas has been one of the go to attorneys in Florida when it comes to elections, candidates, and campaigns. Here is what JC had to say:

The releasing of the number is definitely a crime.  Ironically, even though everyone seems to call this Alex’s PC, the expenditures indicate its under Renier’s control.  The Portillas are notorious for using campaign funds for private expenses.  As just one example, Renier has been pumping gas at the same station as per the reports and alternates between paying for gas from the PC and his campaign card.  Because he is using PC for these expenses, we can prove he is in control of the PC and thus he released the number.

I will be contacting Tim Vandergiessen* on this as well."

*Tim Vandergiessen is Chief of the Public Corruption Unit at the Miami-Dade State Attorney's Office.

The Florida Bar and the JQC are useless pencil pushing bureaucrats. They do nothing while these two take judicial campaigns deeper and deeper to bottom of the Miami-Dade elections septic tank. Both should be sanctioned or disbarred.

I am available for the defense. Of course I’ve also defended white suprematists and even the odd judge so despicable criminals are just part of the job. 100K retainer on this one.

Sorry Rumpole but this is a job for …..wait for it……

“people chattering about the scene in Catch the other night where a retired Miami Judge was seeing being quite cozy with an up and coming British tennis star. They were huddling close and sharing private laughs all night not to mention sharing sushi.
Reps for both said it was just a business diner. But others are saying otherwise with upraised eyebrows over the large age gap”

#metoo shame on you Coco

Whiskey Yankee Tango Delta 9 November 8 Hotel Zulu Bravo 4 2 1 Oscar.
This is one of the Minutemen ICBM lunch codes Trump stole. Doesn’t help him much.
The National Command Authority takes voice print authentication data of the incoming President and changes the launch codes every two weeks or so. Trump could call NORAD and all they would tell him is went Santa is due in New Jersey.

Not for nothing Rump de la rump but you could get into a lot of trouble posting that. Even the length of the code is classified.

Actually you can smarty pants. And this is now a national security issue. Kindly act accordingly and take it down pronto.

Which one is the well dressed one?

Which one is the funny one?

Which one drives the exotic cars?

Will they both become the next Chief Judges of the 11th Judicial Circuit?

It’s always been Hanzy & Coco. Hanzy is bald. Coco is the one in pictures in the NY Post with Emily Raducanu at Catch in NYC feeding each other sushi.

Hanzy is the genius of the two. He likes his sports cars and his need for speed. He runs a tight ship. If you have a big money issue and a justiciable dispute, you want Hanzy. If you want some entertaining dinner talk and to take a walk for an ice cream, that would be the tall one. Coco

The July 22 $10K contribution from Alex's PAC appears as CHE (check) in Renier's PAC campaign finance report. In Alex's PAC report, it appears as a MON (monetary) expenditure. Maybe it was a typo when filing the report and he fixed it later.

No. Both Diaz De La Portillas are scumbags. There is no crime for publishing a judges cell phone number. Absurd to think otherwise. Most of us know some judges cell and personal email. Not a crime to share it. Not even close to a crime. We’re talking about a local county court judge. Give me a break.

The PR law only applies to government employees in possession of information in their official capacity. Read the Supreme Court cases about the pentagon papers. Once a record, even if the agency did not intend it to be, becomes public (for example, the judge gave it to someone), then it is not covered or protected.

Now, if you couple the disclosure with some kind of malicious or criminal intent to harass or obstruct justice…you may have something. But surely, disclosing for purposes of a political campaign would not be that.

Re the 10k, I have no idea. Is it criminal or a civil violation? What is the reason it was done that way and was it really cash as opposed to some other instrument that may be categorized in that manner? Postal order, certified check, etc? I do not know.

I never took JC Planas for an informer

I’d like to see Seraphin lose. He's been an ass for years. But not to a crook.

Rump or Captain, you must know that Planas is a clown of the first order. You will never meet a dumber human being. Everyone who dealt with him when he was an ASA knows that. He hasn’t gotten any better. Why are you holding him in such high regard?

The Bouzi bits Hanzy & Coco were tearing up the pickle ball courts in Miami Beach today. Then a brunch at Big Pink with mimosas. Quite the morning.

I don’t think anyone these days could make the argument that giving out a judge’s cell phone was done with any intent other than to harass. We all use our cell phones for all personal and professional communication. Giving out a cell in a flyer to the public with instructions to “tell him to come clean” is fine with intent to interrupt all of that.

8:44 a.m., there wasn't a 10k cash contribution. It was made by check. Captain, look at the reports and correct that part of your post.

Get out the handcuffs? Captain , what kinda crime defending lawyer headline is that. Dude you need to takes sometime off for reflection. The judge he is running v is not anything worth crying about.

Captain and JC Planas, please read the statutes in their entireties. 119.07 (Inspection and copying of records; photographing public records; fees; exemptions) says hat "every person having custody of a public record shall permit any person to inspect it and copy it" and it lists the condition and exemptions. 119.071 (General exemptions from inspection or copying of public records) lists the records that are exempt from the inspection and copying requirements of 119.07. Neither Alex DLP nor Renier DLP are "persons having custody of a public record" and have not violated the law.

I was very careful to read the documents. I suggest you go to the Local Leadership for Miami-Dade County at the Department of State, Elections web site. Click on the Campaign Documents tab. Click on the August 1, 2022 Audit Letter PDF. Scroll down to Page Two. You will clearly see the $10,000 Contribution and under the Column TYPE is says CAS (for CASH).

You might have been careful to read the Audit Letter in the Campaign Documents tab but you missed reading the list of contributions. Click on the Campaign Finance Activity button, then click on Filing Period "07/16/2022-07/22/22" or "All Dates (Totals)", then click on "Contributions" and, then, click on the "Submit Query Now" button. This is what comes out now and what was coming out on Saturday when you made the post:

It is obvious that "CAS" (cash) was a filing error that was amended to "CHE" (check) at some point after the August 1, 2022 letter.

Please be very, very careful when reading campaign finance reports and documents as they are often crammed with data and difficult to read.

Captain is not a crim defense lawyer.

Captain is probably not a criminal defense or electionlelection

Call it "identity politics" or "racial politics" but we seriously can't afford to lose two Haitian-American judges (Seraphin and Jean) in this election, in a community with such a large Haitian presence.

Seraphin has done a fine job for many years and is more than qualified. The fliers put out by those supporting Diaz de la Portilla are super scummy.

"Seraphin has done a fine job for many years"? Have you ever spent 10 minutes in his courtroom. Ever tried a case in which he presided? Sorry, but he is an ass who needs to go. Then let Fredo get kicked off the bench for his repugnant behavior.