We try not to get political on Football Sundays, but this thought has occurred to us. How was it ok for the Republicans to confirm a Supreme Court Justice eight days before a presidential election, but the same Republican senators are not ok with impeaching a president ten days before his term ends when he arguably committed treason, pushed a mob to commit insurrection, and he and his minions gave speeches that inflamed that mob to storm our Capitol?  The President should be impeached. That is  a question for the House and they have the time to draft articles of impeachment and vote on it.  A trial should be held in the Senate and all senators should have to vote, in public, on the president's actions this past week. It does not matter if this occurs after Joe Biden is inaugurated. Justice knows no time limits. A crime occurred and it must be investigated. If the president committed impeachable acts then he should be tried and judged and history should reflect that when called to the task, our Congress neither flagged nor failed.

The Best Game Sunday is the first game. Ravens at Titans. Titans are a home playoff dog. Talk about a great bet! The Ravens are peaking at the right time. They and the Bills are the two teams no one wants to play this season in the playoffs and the Super bowl. We think the Ravens will win. BUT....The Titans have the best back in Football. The Ravens QB has a tendency to throw INTs in big games. We are compelled to take Tennessee at home +3.

Browns at Steelers. The big question is whether these are your same old Browns? Probably not. They are a good team. And with the better running back, they have the tools to win on the road in Pittsburgh in January (not something that sports prognosticators have often written about the Browns over the past forty years.). But... The game after the one week Steeler QB Roethlisberger had off this year was his best game of the season. For the first eleven games of the season, and especially games 3-9, the Steelers were the best team in the league. They could run and they had a super bowl quality defense. Injuries on the D line, Linebackers and secondary have substantially weakened the Steeler D. So the question is whether Big Ben is well rested. Can they run the ball and will they change their offense scheme of short passes which surprised the league at first, but now they have adjusted to? We think the answer is YES to at least two of those three questions and with a good (but not great Defense) and arguably the NFL Defensive player of the Year in TJ Watt, the pick is the home town Steelers -6.

We saw this on line. It is hard to mock Trump followers when they are doing a fine job on their own. 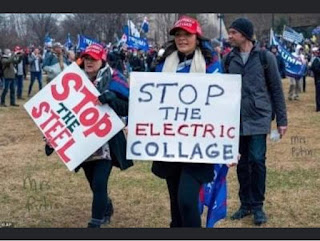 Posted by Rumpole at 9:54 AM
Email ThisBlogThis!Share to TwitterShare to FacebookShare to Pinterest
Labels: NFL Wildcard Weekend

Rumpo go to TMZ right now and see the video of Miya Ponsetto the NY Iphone Karen's second DUI arrest in California. She is soooooo hot. She has tight jeans and a cut off top and is crying and fighting with the police. It is such a turn on and I cannot figure out why. I mean she would be a total nightmare as a girlfriend. A total borderline personality disorder girl. And yet I cannot stop thinking about her.

I'm a pathetic perv yet Miya is not doing it for me. The pug nose and Alfred E Neuman ears are one thing yet, in combination with the whole racism thing, I'm not feeling it. Ugly and Mean? Not tingling my toes