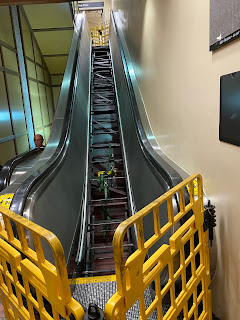 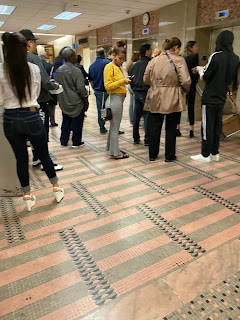 We are imagining the conversation with the REGJB building manager....

We're going to need to breakdown the escalator from 2 to 3.
When can we get this done....hmmm....between December 26 and January 3?
NO WAIT!
The first trial week is January 6. The building will be jammed. Let's schedule it then. Ok, settled.  Send out the memo.

Posted by Rumpole at 8:39 PM
Email ThisBlogThis!Share to TwitterShare to FacebookShare to Pinterest
Labels: Elevators and Escalators

The great Satan has felt the sting of our wrath. Your escalator in your famous courthouse has stopped working. This is only the beginning. If the US continues to engage our peaceful nation you will lose more escalators and then elevators and soon you will be reduced to using the stairwells in your precious courthouse. We demand the resignation of chief judges and legal lackeys Sayfie and Soto immediately.
You have been warned.

Rumpole ... Question? You have great wisdom and understand the economy.

HOW do middle class folks afford to live these days with everything costing so much? How do parents afford to take their 2-4 kids to Disney for a few days or take their family to dinner? Even single young professionals can’t afford to buy a home since they graduate college or grad school with $200k to $400k in loans!

This next generation will NOT live the American Dream like post WW2 families did. Luxury cars cost $100k plus. Stone Crab dinners for two costs about $300 with a glass or two of wine. Even the cost to fill your SUV with gas is $110 twice a week. Health insurance costs? Don’t get me started.

No one can save any money. The 50 and 60 year olds are very fortunate. They have 401k’s and savings. The problem is - will they outspend their savings by the time they reach 80 years old - need round the clock home care for dementia or a stroke - and go broke!

This is the next great bubble burst. The vast majority of human beings running out of money.

RUMPOLE, what do you think? I would love to see a post on this issue and comments by my peers. I am fearful. Not only of geopolitical risks, but also the problems raised above.

My advice? Save your money in conservative assets. Reduce your lifestyle spending. Don’t keep up with the Jones’! Perhaps don’t plan on retiring. Don’t take social security till you are 70. Figure out a way to obtain “assisted suicide” if diagnosed with a terminal disease so as not to make your family suffer financially or be forced to live on Medicaid in a nursing home.

Be warned. Trouble ahead. This is the best it is going to be.

WOW phil Reizenstein insults this blog and it commentators in DOMs post about Rich Mendez. Will Rump defend our honor?

We are already living two seismic shifts in quality of life that show that "the best it is going to be" came and went at least as recently as the 2008 crash, and I'd argue that it was 10-15 years before the peak of the bubble that lead to the crash (so, mid-90s).

1) Life expectancy has fallen in the United States for the 3 years in a row. That hasn't happened in over 100 years. https://www.cnbc.com/2019/07/09/us-life-expectancy-has-been-declining-heres-why.html. The social and economic factors that lead to that take years to develop.

2) The current generation of adults is also expected to do less well than their parents did - a first in US history. https://www.cbsnews.com/news/millennials-are-much-poorer-than-their-parents-data-show/ and https://money.howstuffworks.com/personal-finance/financial-planning/millennials-first-worse-parents.htm

To be sure, living at 90-something percent of peak global civilization is pretty great. But it seems pretty clear that, for now, we are on the decline.

How about Miami's finest (and Sweetwater's dirtiest) parking in lot 27? Not only do they take up a TON of spots, they also create a back up of cars waiting to get in and as they have to talk to the person on the intercom.

11:59
I have no idea how a family of four survives on 50-60-70- a year and manages to take a vacation. The world is so expensive. It can cost upwards of a 100 for a movie. Another hundred for dinner. That's $200 for a night out. Health care is so expensive. I do not know how people do more than survive. And life should be more than just surviving.

Rumpole is bagging an interview with John Bolton. scooping the national media. What will he say at he impeachment trial??? Read the blog and you will know before the failing NY times and amazon Washington post

I think the Ayatollah post is in extremely bad taste and should be taken down. A couple of mistakes here and there and we are in WWIII and if we enter into this it will be the demise of the US. It is why China has been on the sidelines for so long, just waiting and stealing. Russia wants us bankrupted as a nation as we did to them in the late 80s and early 90s seeing their nation split apart. Putin was in the KGB at the time and has wanted revenge ever since. We are 22 trillion in debt, another ground war will bankrupt us, and we will have the same standing in the world as nations like Canada, France, Germany, UK, Australia and Russia and China will be the big kids on the block and Americans will revert to the standard of living of the 1930s. Not funny. Take the post down. Unless you want to go on a first amendment rant.

Nah I am not going on a first amendment rant. Nor do I disagree. It's in bad taste. It's dumb. I had to draw a line many years ago. I set some rules. No personal attacks. No mention of people's families. I didn't draw the line at dumb or bad taste because then I become the arbiter of both and I am not equipped to do that. So I left it up. But your opinion is well taken.

I dont get it. They have like over a thousand missiles and they fired just a couple to purposely miss, then claim victory. The post highlights the fact that they blinked, because if they did anything real to respond, we would respond in kind.

How in the world is that bad taste?

I have watched Phil R from a really high integrity prosecutor in Judge Sepe’s division to be a committed, dedicated, thoughtful, well prepared and mature criminal defense trial lawyer. Bravo Phil. You epitomize what the Constitution was written for and you ensure that your clients get your full effort. Good luck on a pardon and your advocacy on behalf of a client who experienced the worst side of our justice system.