Democrats don't break bread with Libertarians. Republicans don't talk to anyone with more than a grade school education. Dogs don't hang out with cats, and you don't tug on superman's cape and you don't spit into the wind.

There are a myriad of dangers in lawyers mixing with the unwashed, uncouth, hoi polloi. And we are not speaking of bondsmen or clients.

But our readers have a long history of not listening to our advice. Did five of our smartest readers listen to us last week and not pick the Colts over the Fins in the survivor pool? Nope- and they lost (but so did everyone else, so the game continues.)

True, Justices Scalia and Ginsberg were opera buffs, attending together. Nixon did go to China. Ali once loaned money to Joe Frazier. Patton shook hands with a Russian General in Germany. And one time in the last year it is rumored that Senator Graham held open the door for Senator Booker.
So if you must: 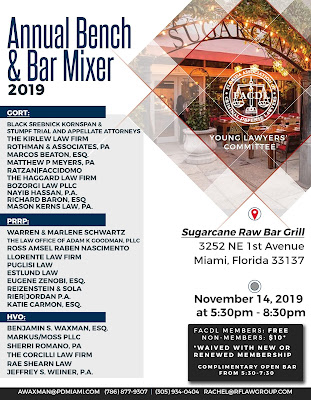 As your mother might say: Be careful. Don't talk to strangers or people soliciting unwarranted comments about how funny, smart, endearing, charming, dedicated, and decent they are. Stay in groups. Don't get picked off alone like the limping Zebra surrounded by a herd of Hyenas, salivating at the easy kill. Be ware of charming smiles and sweaty handshakes slurping free booze and stuffing cocktail franks and mini-quiches  into their purses or pockets. Keep your Amex Black firmly in your wallet, lest wandering and envious eyes cast lecherous glances about your success.

But be decent. You will offend if you talk about legal intricacies, something other attendees likely have no interest in. "Some weather we are having" is usually enough. But double over in pain and feign a kidney-stone if after some harrumphing, a comment like "You know 2020 is an election year" is made.  Avoid discussions where you hear the words "committee" and "fundraiser" at all costs.

Impeachment might make some people queasy. Removal or resignation will cause fear, and the letters JQC may cause an outright panic in some circles. So speak with circumspection. A suddenly urgent text is an easy way to beg off from being buttonholed and given the Lyndon Johnson treatment about "when I was a lawyer I tried this case and during cross examination...wah wah wah wah wah" (like the way adults speak in the Charlie Brown cartoons).


Of course we will not attend. We do not like crowds. We sip superior wines in quiet retrospection by a video of a fireplace  after a day fighting for truth and justice.

But if you must go, after all of the above warnings- then have fun- although for the life of us, we do not see how that is remotely possible.

If the above doesn't vault us back to the top of the FACDL's hit list (your local FACDL is sponsoring this soiree) nothing will. The others we have made oblique reference to do not have a hit list. They are by law "fair and impartial" right? RIGHT?

Posted by Rumpole at 7:42 AM
Email ThisBlogThis!Share to TwitterShare to FacebookShare to Pinterest
Labels: Bench and Bar Mixer

Along the same line of thought . . . Sam Huff once shook hands with Jim Brown (for the 1% of readers who know who these people are)

Why is Phil Reisensten skulking around the courthouse with a broom? It looks like he's in trial and up to something.

Rumpole may not be there tonight. But his wife most certainly will make an appearance.

You gotta read the FSC opinion this week about local attorney Jonathan Schwartz. Boy were they mad. The referee found him not guilty of fraud and the FSC reversed the referee and found him guilty. Referee was Celeste Muir. That has to be a first! They sent it back to be heard by a new referee just to determine punishment. He altered a police line up and removed his client's photo that was identified by a victim. He left the circle and the initials of the victim. He used it in a depo to trick a victim. Not cool! SC 17-1391


Also note, he has yet another complaint up there pending resolution. SC-19-983. He sent text messages as advertisements to clients already represented by a lawyer.

BTW, he pulled a stunt like the text message on one of my clients years ago. He had an employee show up at her house with a letter and a one dollar bill attached seeking to get him hired. Family did not know abut the arrest. Boy was my client pissed off. Client was a civil lawyer too. Bar did nothing.