Tens of millions of years ago the dinosaurs saw a slightly smaller, slightly dimmer sun in their sky.
As out sun consumes it's finite source of fuel it will get slightly larger, slightly brighter and slightly closer to the earth.
This will cause the earth to heat up. The oceans will start to accelerate their evaporation, putting more vapor in the atmosphere, accelerating the greenhouse gas effect (unless you're a Republican and do not believe in greenhouse gasses, at which point you can just say "whew it's hotter than Hillary's email server tossed into a fire") , which will cause surface temperatures to rise even more, which will increase the cycle until all liquid on earth is gone (except for a few cans of Materva which are indestructible).

The atmosphere will disintergrate and the earth will be a scortched wasteland, much like parts of current day New Jersey. 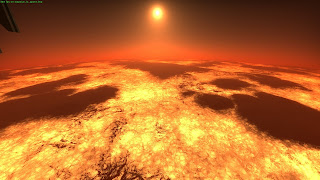 This is our future. We are doomed.
Have a nice day.
Posted by Rumpole at 1:00 AM
Email ThisBlogThis!Share to TwitterShare to FacebookShare to Pinterest
Labels: Have a nice day

Yes, this is projected to happen in about 5 billion years. They're not sure if the sun will merely scorch the Earth into a molten waste planet or if it will expand large enough to actually envelope the Earth.

Grateful for the perspective but really aware that a lot of global heating is going on now - and accelerating in odd ways, like via massive fires in Alaska and Siberia, and even fires in Greenland, which also experienced a heatwave recently resulting in massive melting of the ice and snow there. So, respectfully, I suggest more attention to the climate changes already impacting us. And I would like your acknowledgment of the ongoing Sixth Mass Extinction. One contribution we make in South Florida is through our use of nicotinoid pesticides - which have a dreadful impact on bees and other polinaters. Without the bees, agriculture in the US will be harmed to the point where it hurts our provision of affordable food not just to the world (the US exports a lot, of course) but to us here in South Florida. Compared to the size of population, there is not nearly enough nearby farmland to support us. Consider Extinction Rebellion.

Not doomed yet but almost. To save the planet, we must do the following immediately:
1. eliminate car and plane travel. Exceptions are for the military and police.
2. make the use of AC federal felony.
3. slaughter all cows. They are one of the primary causes of CO2. Thus, every American must go on a vegan diet. This will be enforced by a federal diet police force.
4. Declare war on China, India, and Russia. They, way more than we, contribute to this crisis. Without their cooperation and rapid de-industrialization, the world is doomed. The American contribution to this crisis means nothing without it. A few thousand nuclear warheads aimed at their cities will convince them very fast to adopt our survival policies.

Brazilian president Jair Bolsonaro has offered up a very constructive solution where every person in the world can help stave off the ecological disaster that is awaiting us: “It’s enough to eat a little less. You talk about environmental pollution. It’s enough to poop every other day. That will be better for the whole world.” We need to take this recommendation very seriously.

Hey Rump why don't you post Judge Cueto"s report slamming the Bar and Lewis and Tein? Perhaps you and others should read the detailed analysis by Judge Cueto. You quickly posted the relate reports by Judge Tunis and you were told that Cueto would expose the truth, now you do not post Judge Cueto's report. Why? Point is that prejudice and bias are alive and well in Miami!