The old newspaper adage (for those millennials who read this award winning blog, a newspaper was something that printed on real paper news stories and was physically  distributed initially twice a day at newsstands or delivered to your home or office once a day. Yes, we realize you millennials are shocked at the waste of paper and fossil fuels in printing and delivering such an item, but you will never know the pleasure of a hot cup of coffee, a thick Sunday London Times, a flaky-buttery French croissant and an outdoor café with nothing but time on your hands and no cell phone to text or read emails on. It's your loss.  ) is that there is no story when a dog bites a man but it is headline news when a man bites a dog.

With that out of the way, we publish a "dog bites man" story that will not raise eyebrows.
Headline: WEIRDNESS IN BROWARD COURT SYSTEM

Broward Clerk of Court Brenda Foreman has filed multiple complaints against our brother-blogger in Broward because he has tried to...steady yourself....take her picture in public! (Gasp!!).
No this is not a paparazzi harassment thing.

From the Sun Sentinel (see above re: Newspapers) article:

The dispute began in October, when Gelin referred to the clerk as “Brenda” during a conversation about one of his clients. Forman insisted on being addressed as “Ms. Forman” or “Clerk Forman,” according to the Bar complaint.
Gelin bristled at the insistence on formality and decided to write about Forman’s reaction. Things escalated when he tried to take her picture with his cellphone on several occasions to accompany his article.
Rumpole says (sadly shaking head): Broward, Broward, Broward. What are we going to do with you people? Can't we all just get along? And don't you have a nice library there? All problems can be solved by refuge in the Bard.
Romeo and Juliet:
Juliet, having just read a text from her BFF that the guy she's crushing on belongs to a family that's been dissin her family since like forever, is upset that R's last name will prevent her from dating him. She then expounds on the meaning of a name, words that have passed from generation to generation, centuries old, but contain a lesson for our Broward brethren in 2018.
Tis but thy name that is my enemy;
Thou art thyself, though not a Montague. What's Montague? It is nor hand, nor foot, Nor arm, nor face, nor any other part Belonging to a man. O, be some other name! What's in a name? That which we call a rose By any other word would smell as sweet; So Romeo would, were he not Romeo call'd, Retain that dear perfection which he owes Without that title. Romeo, doff thy name, And for that name which is no part of thee Take all myself.
So Brenda, Forman, BF, whatever. That which we call a clerk would file (and misplace the file) by any other name. As the saying went where we grew up, call us what you want, just don't call us late for the canapes and cocktail hour.
The Sun Sentinel dives a bit deeper into Ms. Forman's rise to Clerk, noting that she came to the courthouse where misery thrives with no legal or clerking experience and credited her victory with her marriage to her husband who appears to be many years her elder. We report, you decide: 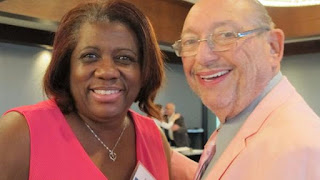 Forman has recently lost an attempt to be declared her hubby's guardian, A Broward judge ruling that her petition was filed "in bad faith".
Miami Component:
Forman has filed for a DV restraining order against the intrepid Broward Blogger Bill Gelin who is snapping her photo and blogging about her. She has asked Broward Sheriff Deputies to stop Gelin  from taking her picture in public, citing the oft used Broward County exception to the Bill of Rights ("No stinkin law or constitution or judge shall stop a Broward Officer from doing whatever they damn well please."  Motto of Mike Satz,Broward State Attorney).  It's all gotten too messy for a Broward Judge to handle (which is saying a lot) so the matter was referred to our own Judge Bill Altfield who will handle the contretemps with his well known fairness, legal wisdom, and equanimity.
So once again, Broward turns it's eyes towards DC and says "Mess? Madness? Turmoil and plot twists in our courts? We've been doing this long before Trump had a tower in NYC."


Posted by Rumpole at 8:12 AM
Email ThisBlogThis!Share to TwitterShare to FacebookShare to Pinterest
Labels: Broward Clerk, Craziness

Rumpole, thrilled to let your readers know the revival of Rochelle-Rochelle is coming to the Broward Center for the Performing Arts in Spring 2019. Come hear the hit song:
"You made a long journey from Milan to Minsk, Rochelle, Rochelle!" sung by Becky G making her hit theater debut!

Don't miss out. Tickets will go faster than a fast Gerry Klein calendar.

I saw it on off-Broadway in NYC last year. A bit too long even with the intermission. the whole Russian babushka dance thing is over done.

Alex Michaels suspended for 6 months, then probation for 3 years per Florida Supreme Court.

The REN, a financial Podcast for the 2020's is out with their year-end forecast and their exposition on the flattening yield curve is ….mind-blowing to say the least. Can you say "load up on JP Morgan and Citi" ? I can.

One on one, he’s a nice guy. But yes, sometimes his temper gets the best of him.

We should take no pleasure in his discipline. He’s 68 years old and the practice of law is his livelihood. A 6-month suspension means he may have to retake the Bar Exam, and show proof of rehab before being readmitted to practice. So 6 months may actually turn out to be much longer, depending on what conditions must be met before he can return to practice.

I truly wish Alex well and will miss seeing him around the building.

I have to agree with 12:46. There is no excuse for his misbehavior. However, Alex is a GREAT guy. And, when I was a prosecutor, I loved having cases with him. He actually cares about his clients and does every he can to assist them. I take no pleasure in his suspension and wish him nothing but the best. I hope he takes the time to address his issues and comes back stronger, more effective, happier, and, yes, more even keeled than ever.