There were two Saturday events that arguably defined the 1970's: The Saturday Night Massacre and Saturday Night Fever. One involved the twisting, physical machinations and mis-directions of individuals popular in the public's imagination....and the other involved a movie about the Disco craze.
Considering most of our robed readers were not alive on October 20, 1973, a history lesson is in order.

In October 1973 President Nixon was on the ropes. In the spring of 1973 Attorney General Elliott Richardson appointed Archibald Cox as the special prosecutor appointed to investigate the Watergate burglary.


Cox soon issued a subpoena to Nixon for the tapes of White House conversations. The battle lines were drawn. On Friday October 19, 1973  Nixon offered what is now known as the "Stennis Compromise": Senator John Stennis (who was notoriously hard of hearing) would listen to the tapes and summarize them for Cox. Cox rejected the offer that same day.

On Saturday Nixon ordered Richardson to fire Cox. Richardson refused and resigned. Nixon then ordered deputy AG William Ruckelshaus to fire Cox. Ruckelshaus refused and also resigned. Next up: Solicitor General Robert Bork who suddenly found himself to be acting Attorney General Of the United States. He woke up Saturday morning as the unknown Solicitor General. Perhaps had some coffee and a bagel and reviewed some briefs. Before midnight he was the AG of the US. In Bork's defense, both Richardson and Ruckelshaus had given their word to Congress that they would not fire Cox. Bork had not, and the order from the President was facially valid. Bork had not wanted to go down in history as the man who "did the President's bidding" but he felt he had no choice.

On  November 14, 1973, US District Judge Gerhard Gesell (who was born in Los Angeles to parents who were immigrants, which currently raises suspicions about his loyalty to the US)  ruled that the firing of Cox was illegal and ordered he be reinstated as special prosecutor. Nixon fought the subpoena to the supreme court, where he lost in an unanimous decision Tump v. US  (not yet)  US. v. Nixon 418 US 683 (1974). Nixon resigned in disgrace ten months after he Massacre.

Saturday Night Fever on the other hand was a 1977 hit movie staring John Travolta detailing the life of Tony Manero,  a Brooklyn kid who spends his Saturday nights dancing at local discotheques. The movie was based on a 1976 New Yorker article by writer Nik Cohn entitled "The Tribal Rights Of The New Saturday Night."

incent was the very best dancer in Bay Ridge—the ultimate Face. He owned fourteen floral shirts, five suits, eight pairs of shoes, three overcoats, and had appeared on American Bandstand. Sometimes music people came out from Manhattan to watch him, and one man who owned a club on the East Side had even offered him a contract.  A hundred dollars a week. Just to dance.

Interestingly, much like Nixon and the current POTUS, Cohn acknowledged in a 1990 interview that his article was mostly a fabrication. Cohn was a Brit and he was unable to garner enough material for  his assignment to document the emerging New York Disco-Club scene. One night,  Cohn- recently arrived from London,  went to the club 2001 Odyssey in Bay Ridge,  Brooklyn, and witnessed a drunken street fight outside the club. One of the combatants fell to the curb and threw up on Cohn's leg. Cohn quickly retreated to Manhattan and thereafter fabricated most of the story, relying on characters he knew from a gang in Derry, Northern Ireland, where he had grown up. 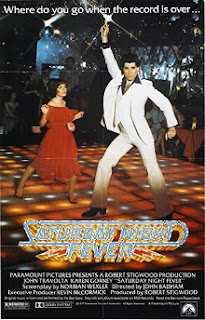 More spectacular content from the best blogger in America. I didn't have a bagel and coffee with my morning reading like Bork probably did, but the blog went just as well on my Ipad with a café-con-leche and mesclado at Sergios on Coral Way. Keep it up Rump.
Your Fan

Interesting coincidence that the article that gave rise to SNF was written by someone named Cohn. Didn't Roy Cohn take a young Donald under his wing and assist him in obtaining shady tax schemes, questionable zoning variances and various sweetheart deals while threatening any and all who might stand in his way?

I personally know that the entire Saturday Night Fever Soundtrack is loaded into Sir Kenny's Porsche media player.
Plus the best of Gilbert O'Sullivan (Alone Again, naturally); Band Of Gold; Son Of a Preacher Man; The Soundtrack to the new Queen Movie; The Soundtrack to Boogie Nights; Violent Femmes; The Raveling Wilburys; The Greatest Hits of the Partridge Family; Placido Dominguez sings the blues; The Collected Speeches of Golda Mier; The Queen Is Dead (The Smiths); The soundtrack to the Beauty and the Beast; and of course his fav song of all time: MMMMBOP by Hansen.

Dear Rump. you have unwittingly (or perhaps knowingly) done a great service to anyone who has or should have a whiff of interest in the Watergate clustersf***. I am in the tiny minority who thinks the so called scandal was totally blown out of proportion. First let me correct one blatant error and comment on two other points you discussed:
1. There is no way on God's green earth that Robert Bork ever woke up on a Saturday morning reaching for a bagel and coffee. I know quite a bit about Bork. He woke up that morning reaching for a glass of water and two aspirin and it wasn't because of anything Nixon did. Bottoms up to a great mind.
2. You say that Richardson and Ruckleshaus resigned not because they thought what Nixon was doing was illegal but because of promises they made to the senate judiciary committee that they would never fire Cox. Bingo! Very few people know this and because of it, there is a myth that they quit because they thought Nixon's action was illegal. Bork did the axing job after making sure he never made any such promises himself. Hopefully, neophytes who read this blog will take note before they rush off to the gym and then drink some God awful concoction at Starbucks while listening to some equally undivinely inspired computer generated music on air pods.
3. Your comments on Gerhard Gesell are almost like a footnote but the man probably deserves a post all to himself. He handled the Pentagon Papers case and many other notable cases. He was a great judge.