THESE are the times that try men's souls. The summer soldier and the sunshine patriot will, in this crisis, shrink from the service of their country; but he that stands by it now, deserves the love and thanks of man and woman. Tyranny, like hell, is not easily conquered; yet we have this consolation with us, that the harder the conflict, the more glorious the triumph. What we obtain too cheap, we esteem too lightly: it is dearness only that gives every thing its value.
Thomas Paine, The Crisis, December 23, 1776. 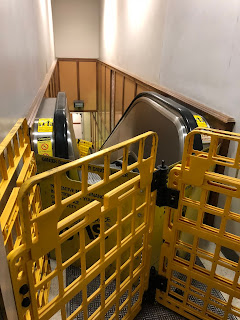 Yes, that is the escalator on six in the REGJB, in its normal non-operative state.

SAM KONELL TO FED PRISON FOR FIVE YEARS
We missed this article by ace Herald scribe Ovalle on the sentencing of REGJB irregular Sam Konell to five years in federal prison by US District Judge Jose Martinez late last month for patient brokering.
It was a nice touch for Judge White-Labora to be a stand-up gal and write a letter on his behalf. But as the article makes clear, Konell had free run of the jail and was pulling down over a 100K a year for six years brokering patients for Medicare treatments they didn't need. Martinez was sympathetic to Konell's lifetime of good deed, but the SDFLA is the epi-center of medical fraud and we, the taxpayers foot the bill for shenanigans of this sort.

It's always sad to see a good man turn bad. These are indeed the times that try men's souls.

From Occupied America, where everyone but us wants to work at the White House, Fight the Power!

Posted by Rumpole at 10:56 AM
Email ThisBlogThis!Share to TwitterShare to FacebookShare to Pinterest
Labels: Sam Konell

I never trusted little fellow as he scooted around the Justice Building. Although I did like the blonde lady that assisted him. Glad she was not involved in his scam.

The incestuous relationship of mental health with criminal justice is shady. I remember Konell being dragged into misdemeanor jail division for placements of defendants charged with trespassing. Getting ordered to do 90 days at Southern Winds? Bullshit. Misdemeanor jail division should be for felony bond violators and probation violators charged with misdemeanors. Nobody should sit in jail on a trespassing charge. CTS and have a nice day.

I liked Sam but, we don't do that crap at my office.

Is anyone reading what those guys are doing at the 3rd DCA? It seams as if the place is run by prosecutors. If you see Leslie Rothenberg or Kevin Emas on the opinion, you know the State's going to win no matter what they do wrong.

Over 18 years ago I was a little ASA in county court and Konell used to make the hair on the back of my neck stand up when he entered the courtroom. He was slimy, he wasn't forthcoming with information and he never looked you in the eye.....

I bet the feds only charged him for the last 5 years because of statute of limitations issues, because this man had been doing his shenanigans way back in the early 2000's......

When can we get some new blood and a brilliant mind or two on the 3rd DCA???

Kevin Emas is an excellent Judge and a great trial lawyer- I was assigned to him as a young public defender and he was professional and fair. He is nothing like rothenberg. He would not like you because he does not suffer fools.

Are there any vacancies now or soon on the Third DCA? We need leadership on that bench.

The 3dca is the laziest, most intellectually-dishonest dca in Fla. It issues pcas when it can't come up with reasons for denying meritorious appeals. Or it misrepresents the record or the law in issuing opinions affirming convictions that should be reversed. It's like they have a rubber stamp to reverse in state appeals, and to affirm in defense appeals. Raise your hands if your trial strategy is affected by your certainty that the 3dca will f**k your client no matter the merit of a possible appeal.

What's up i am kavin, its my first occasion to commenting anywhere,
when i read this piece of writing i thought i could also create comment due to this brilliant paragraph.

Dear Mr. or Ms. 9:59 pm.
I know Kevin Emas is smart and may mean well but, take the time to read what he and Leslie are saying and you'll wonder what planet they're from. His recent affirmance was shocking. He said that comments about silence were just a "mere slip of the Tongue."
I do lots of appeals and lately the 3rd DCA bench seems to care less about State misconduct.
Where is Alan Schwartz when we need him? He may have been an asshole of the highest magnitude but, he followed the law.

Thank god I don't have a job where I ask a judge to put a 70 year old in prison for 5 years. I'd rather clean toilets.

Kevin is a great and fair judge as are all GATOR judges.

IF I was the sentencing Judge I would have put that little slim dog, Sam in jail until he at least 80. He milked the system instead of getting a real job.

We need some of the academic type circuit judges to do their duty and APPLY for any vacancies on the 3rd DCA.

SOMETIMES A PICTURE IS WORTH A THOUSAND WORDS, OR MORE. THE UTTER INCOMPETENCE AND INABILITY TO LOBBY THE STATE AND FEDERAL GOVERNMENTS FOR A QUALITY COURTHOUSE IN ONE OF THE JURISDICTIONS THAT HAS SHOWN AN INABILITY TO LOWER THE CRIME RATE MEANING A CONSTANT SUPPLY OF CASES FOR THE COURTHOUSE AND PEOPLE WHO WORK IN IT.
YOU CAN LITERALLY EAT OFF THE FLOORS OF SOME COURTHOUSES IN THE STATE, WITH MAHOGANY DOORS AND MARBLE FLOORS.
WHEN WILL THE JUDGES, PROSECUTORS, PD'S ETC. JOIN TOGETHER AND DEMAND PARITY WITH ORLANDO, WPB, ETC. WHAT A PIECE OF SHIT OF A BUILDING!

I used to be suggested this blog by my cousin. I'm no longer positive whether or not this publish is written by means of him as
nobody else understand such particular about my
problem. You are amazing! Thank you!

Yea when the elderly get rich stealing from our Medicare program, which provides for the elderly and disabled, they should only have to write a letter of apology. That way when we exempt the elderly from punishment, it will surely never recur!

I'm a Gator too and I do appeals. The 3rd DCA is simply not fair to criminal defendants. They bend over backwards to screw us. Top offenders in order of who hates us the most:
Rothenberg
Emas
Luck
Scales
Lindsey
The rest have no guts.

I couldn't agree more!!!! We need Fine, Hanzman, De La O, Walsh, Rebull and Hirsch to step up!!!! The 3rd needs you!!! Don't leave us at the mercy of of Bronwyn Miller and Monica Gordo!!!!

The appointments process to the District Courts of Appeal by partisan Governors with a right wing agenda and a merit retention system where you can never get ridof bad judges have resulted in the abysmal state of affairs we are seeing.
If mostly prosecutors are appointed to the lower courts and then elevated to the DCA's don't expect bleeding heart decisions.
When was the last intellectual elevated to the 3rd DCA? And who the hell wants the job anyway?
The only innovator as a Clerk of Courts was Marshall Ader aided by Harvey Baxter.
I love Harvey but his only excuse is lack of money. I say it is lack of leadership.
We need a new Courthouse Civil and Criminal together with a new jail and new offices for the Stste Attorney and Public Defender.
I am tired of dealing with the Stone Age practices of all these institutions.
I estimate $3 Billion would take care of it.
They should have taken the Shrine Temple property and created a Justice complex but there is no leadership and innovation anywhere in the system to create meaningful change.