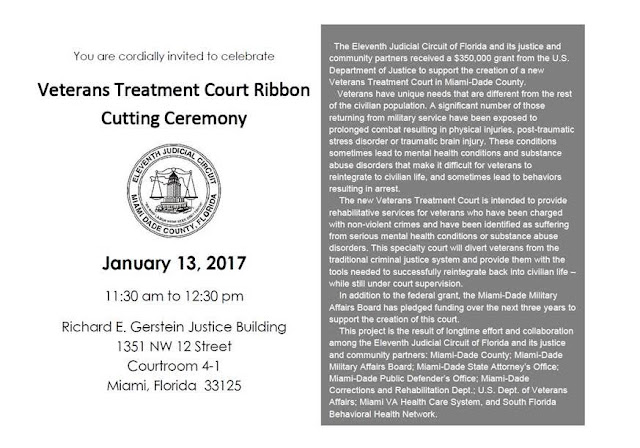 Judge Tinkler-Mendez will preside over the new court.

REGJB Old Timers know that Miami was the First In The Nation to start a Drug Court- trivia- name the late Judge who founded drug court (hint- he was an old motocycle cop before becoming a lawyer). UPDATE- All answers in comments are correct. The great Stanley Goldstein.

Hundreds of thousands of veterans have returned from two-decades of war, only to find no parades, and not many people who understand their problems. This is a good start. Well done.


Posted by Rumpole at 7:05 AM
Email ThisBlogThis!Share to TwitterShare to FacebookShare to Pinterest
Labels: Veterans Court

Loved Stan Goldstein. He was a Key Biscayne Motorman in the old days. He started drug court and Hugh Rodham (Hillary's brother) was one of the first PD's in there.

Don't forget about the first ASA there; Mean Gene Cipriano

Hmmm what happens to Cubans who pled guilty ...,,sounds like the next Padilla. What day you Rumpole? http://www.miamiherald.com/news/local/article126519244.html

I have a bit of problem and this here blog seems to be filled with older guys who may have some answers. I'm single in my late thirties and I think I'm a good looking guy, have a steady job, a nice condo on the beach and a car.

Last week a couple of my co-workers decided to hit the bar after work. We won a big case and wanted to kick back with a couple of beers when two Goddesses walked in. We're talking all around beauty queens through and through. As my buddies and I were about to approach and ask them if we could buy them a drink, in walked two guys, we're talking the type of guys you would see at Comic-Con or at a Lord Of The Rings film festival. My friends and I are seeing a lot of this, hot looking babes with not so hot looking guys.

Is there some secret playbook these guys have who land these hot women?!

Broward has had veteran's court for the past 3 years. It is an amazing program!

What are the parameters of Veterans court?

10:09 I think their secret is they don't spend their time writing fake comments on blogs.

Or they remember how important check appeal is.

They go down! Nerds are better lovers than hot guys.