In what seems like a no-brainer, the Florida Supreme Court has ruled that a defendant's pre-miranda, pre-arrest silence CANNOT be used as evidence of guilt because it would violate the right against self-incrimination.

In what is also no surprise, the case came out of Broward where the prosecution repeatedly, in closing argument, emphasized the defendant's pre-arrest silence in the death of her husband.

WE ONLY EAT AT THE MOST EXCLUSIVE PLACES 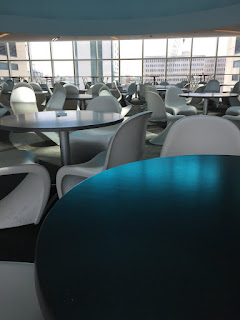 Posted by Rumpole at 9:14 PM
Email ThisBlogThis!Share to TwitterShare to FacebookShare to Pinterest

Is that the Taco Bell in Tijuana Mexico

And the Rosy Aponte saga continues. Readers may remember that the Honorable A. Jay Cristol found Ms. Aponte unfit to practice in the United Staes Bankruptcy Court as a result of her misguided attempt to assist known fraudster, Walter Lista in his Chapter 7 bankruptcy. Marionette master, John Ruiz, apparently pulled Aponte's strings while she malpracticed before Judge Cristol. Until today, Walter Lista was busy directing Ruiz' latest ponzi scheme, MSP Recovery, however, his troubled tenure at Ruiz's side was cut short by a grand jury indictment on 12 counts of bankruptcy fraud perpetuated by Aponte's incompetence or complicity. While Lista's arrest and indictment were made public today, it remains to be seen which of his co-conspirators remain to be indicted for past crimes or set up by Lista for a sentence reduction.

Not such a no brainer Rumpole. Again in a well written, and very clearly drafted, opinion (as in Mcadams just weeks ago) designed to avoid the effects of Michigan v. Long and Virginia v. Moore, the new liberal majority of the Florida Supreme Court, in continuing its decidedly left hand turn, has expanded a defendant's rights beyond those granted by the U.S. Constitution as interpreted by SCOTUS.

This was not a decision dealing with post Miranda, but pre-Miranda silence. SCOTUS made it clear in Doyle v. Ohio and Griffin v. California that after an express invocation of a person's right to remain silence the state may not comment upon that silence, even for impeachment purposes. However the attack on Griffin and Doyle permitting the use of pre-Miranda silence for substantive evidence and impeachment began long ago, and was renewed just two terms ago in Salinas v. Texas. In the Court's opinion written by Justice Alito, SCOTUS ruled that:

An express invocation requirement ensures that Government is put on notice, when a witness intends to rely on the privilege, so that the prosecuting authority may either argue that testimony sought could not be self-incriminating, or cure any potential self-incrimination through grant of immunity, and also gives courts tasked with evaluating Fifth Amendment claim a contemporaneous record establishing witness' reasons for refusing to speak.

The Floria Supreme Court holds that the State’s use of a defendant’s pre-arrest, pre-Miranda silence as substantive evidence of guilt violates the Florida constitutional right against self-incrimination, and the State is further precluded under Florida’s evidentiary law from using that silence to argue a defendant’s consciousness of guilt. This directly contradicts SCOTUS decisions on the same subject.

Once had the jambalaya at that cafeteria. Delicious. But they never made it again.

The case is not a Broward one but a Palm Beach one. The 4th DCA encompasses both counties. Read carefully before you speak.

I have to thank the professor for clearing that up. I would challenge one thing he said; "the newly liberal majority". Not so new. Pariente joined the court in 1997, Lewis and Quince in 1998. Canady and Polston (the two dissenters in nearly every case) joined in 2008 and Perry and current CJ Labarga both joined in 2009. So the "new" liberal majority has been in place for at least six years.

It seems that every opinion written by the court is 5-2 and has been that way for quite some time. It must be killing Governor Scott.

Professor: what is the law on who will appoint the next four justices as I believe that four of them will age out at the end of Scott's term? Will it be Scott or his successor? If it is his successor, that makes the gubernatorial race in 2018 the most important race this state will have known for quite some time. It will completely change the makeup of the court if a Republican governor is elected and then there will be a "new" conservative majority on the court.

Currently, the leading candidate to become the next governor according to most of the political insiders recently polled are Agricultural Commissioner Adam Putnam for the Repubs and Gwen Graham, current US Congresswoman (2nd District) and daughter of Governor Bob Graham, for the Dems.

CJ Pariente and co. have a rather lengthy history of ignoring statutes and case precedent and expanding defendant and plaintiff's rights (if you think they've significantly expanded the rights of criminal defendants, you should see what they've done for plaintiffs). The made the wrong call here once again, but it's no great surprise. I'll be curious to see what happens in the next couple of years when Scott replaces four of them..........

I love that they did it on Florida law grounds and basically fucked any possible appeal of the order.

9:59 a.m., the SCOTUS lockstep amendment only applies to Article I sections 12 and 17. It does not apply to section 9.

In answer to your question Captain, I believe that Scott can not appoint a new justice until the vacancy exists, and it will not exist until their actual 70th birthday. Or based upon the Court's advisory opinion regarding the effect date of the six year term for County Court Judges in 1998, if they are termed out and not able to start a new term in January, then a new justice can not be appointed until the vacancy actually exists in January. Since the term of the governor co-terminates with the justices' then it is the next governor who will make the appointments.

I will add one more name to the possible Republican candidates for governor. How about our own dear, sweet and borderline competent Attorney General Pamela Jo Bondi. Saw her the other night out for dinner, and she does believe that she is the right candidate, and that the governor's chair belongs to her.

Based upon what you say about Gwen Graham, I can now understand why Bob is starting to show up on television a lot lately. Just saw him last Friday night on Bill Maher's Real Time on HBO.

If you have a "right to remain silent" it seems logical that the "right" is always there before during and after arrest and any comment about someone doing so would be just as wrong as commenting on a defendant declining to be a witness against his or herself.

Years ago Judge Rainwater trapped a defendant who was charged with doing 45 in a 30 mph speed limit zone who blurted out "I wasn't going that fast." Rainwater then asked "How fast werevyou going? Not more than 35 said the defendant. Guilty said Rainwater.

When Judge Shelly Schwartz tried to pull the same crap on my ex-wife, I shushed her and reminded him that a defendant had a right not to self incriminate, that the question was judicially improper and that he was going to act as a prosecutor in a form where none was present, then in the interest of justice it then became incumbent upon him to act as a public defender also. Of course after the first question his neutrality was compromised and the case had to be dismissed.

Getting back to Horwitz, if a defendant pleads not guilty they certainly don't have an obligation to prove themself not guilty but can merely rest after the prosecution's case.

Uh oh Professor. Candidate Trump is coming for you. Latest news is that if elected he would move the government out of higher education lending and restore that role to private banks, as was the case before Clinton and then Obama made changes, causing a spike in tuitions costs and feeding a bubble of default. Why not charge whatever and take whatever students, it was free government money. Local banks should be lending to local students, Trump says, but schools should also be playing a role in determining loan worthiness. They should have "skin in the game" Trump says.

You know what that means, right? Without the Feds subsidizing outrageous tuition charges for worthless degrees, the higher ed racket would get busted up. Want to charge some sucker 100k for a degree in Women's Studies that he will likely never pay back? No bank will do it and if the kid does default after graduation, the school should be held accountable.

And here's where it gets interesting for "The Professor": Want to charge astronomical tuition from a would-be law student who would need to put the whole cost, plus three years of not-working, as a debt -- even thought the student has shown no indication of being able to pass a bar exam (see undergrad institution, undergrad GPA, LSAT scores) or find future legal employment? Well, the Feds would no longer subsidize that debt, getting baby boomer professors fatter off the lies sold to mediocre students who want to be lawyers, promised a life of BIGLAW in plush offices preparing cases for the Hague.

I won't name your school Prof, but it's no wonder you oppose Trump at every turn. But the train is comin'! It's rolling round the bend!

Congrats to Paul Calli, and Lewis Tein .....from Julie Kay at the DBR:

Miami lawyers Guy Lewis and Michael Tein are finding vindication after five years of intense battling with a former client, the Miccosukee Tribe of Florida, by reaching a $4 million settlement as payment on three sanctions orders.

Lewis, a former Miami U.S. attorney, and Tein, a former federal prosecutor, accused the tribe and its attorneys of trying to ruin their law firm's professional reputation.

The settlements filed May 13 resolve penalties for sanctions orders issued by federal and state judges to cover Lewis Tein's attorney fees and costs spent fighting racketeering and malpractice lawsuits alleging excessive billing and fraud. The firm claimed the lawsuits were frivolous and filed in bad faith.

Lewis, Tein and their longtime attorney Paul Calli of Calli Law in Miami declined comment. The dollar amounts for the settlements were listed in court documents.

11:29 - I don't understand. Was there something wrong with The Professor's analysis, or does it just you get off venting your anger? Sounds very Trumpian to me. Look at that, I invented an adjective.

Shay "to hell with the facts or truth" Weaver caught up with Bernardo for this exclusive....

The Horwitz case was out of Palm Beach. The killing was in the wealthy community of Admiral's Cove in Jupiter. I was the trial lawyer. I also argued the case before the Florida supreme court. Jon Mann helped me out with the brief.

Florida has a long history of broadly and independently construing the FL version of the 5th amendment, article 1, section 9. See Rigterink, Hoggins and the principle of federalism.

In Salinas v. Texas, I don't think a 403 objection was made and preserved for appeal. The supremes decided the issue on Florida constitutional grounds and evidentiary grounds.

I saw Hamilton in NYC and it was incredible. I still can't get a table at Per Se. Maybe you can hook a brotha up?

Has the case against Lista been brought before a judge?

Yes. Walter Lista entered a guilty plea on the federal bankruptcy fraud charge. I believe he is currently on probation but still working with John Ruiz and his brother-in -law Frank Quesada at MSP Recovery