An excellent analysis of the recent spate of 3rd DCA PCAs caused us to re-think our prior criticism of the FIU/Kendall-Courthouse ensconced judges:

Anonymous said... While PCA opinions are short, if you actually read them you will learn the following: of the 29 criminal PCAs, six of them are Anders briefs (if you don't know what an Anders brief is, you should stop reading this blog and start reading the South Florida Lawyers blog); 17 of the criminal PCAs are denials of post conviction relief, 15 of which are pro se. Of the six remaining PCAs, 2 are plenary appeals from adult felony court and four are from juvenile court. Friday, May 24, 2013 3:13:00 PM


Leaping to the defense of his former colleagues was the former CJ of the 3rd DCA:

Juan Ramirez, Jr. said... If you think the Third District writes PCAs for such a questionable reason as to avoid Supreme Court review, you should check out Marshall v. State, 45 So. 3d 470 (Fla. 3d DCA 2010), in which the en banc court divided 6 to 4, with a concurrence and a dissent, in a developing area of the law (Crawford v. Washington). Of course, I would never suggest my former colleagues would resort to such a questionable practice. I am sure the panel had good reasons for not writing. Friday, May 24, 2013 8:17:00 AM

For those of you that do not know, Judge Ramirez left the bench for a much more honourable profession: blogger. His blog is here.

IF YOU CAN'T STAND THE HEAT....GO WATCH EM GET BEAT:
The Heat got beat, which makes our weekend complete.
We watched  the Heat get Beat Friday night from a very nice box, far removed from the white shirted hoi-polloi -many of whom read this blog and have loved their precious Heat with every ounce of their being ever since the geographically challenged Lebron spit on Cleveland and decided to take his "talents" to South Beach (we just chuckle every time we imagine that carpetbagging phony finding out that the Arena was not on SOBE).

And all you Heat fans, who are so devoted to this team (so you tell us repeatedly), can you explain to us why everyone was bolting for the exits with about 3 seconds left and your team only down by three? It's not because Miami Heat fans are bandwagon jumping front running phonies is it?

With a hat-tip to @davidovalle305 who is enjoying the long weekend (and his non-paid furlough from the Herald) in Jamaica, here is an excellent description from an eyewitness to a shooting: 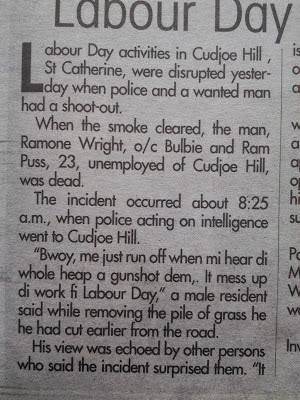 A long holiday weekend marks "di" start of summer. Have fun and "me" see you Tuesday, ready for trial.


Posted by Rumpole at 7:45 AM
Email ThisBlogThis!Share to TwitterShare to FacebookShare to Pinterest
Labels: 3rd DCA, Heat Stink, Miami Heat


Miscue's?
How about James chokes as Heat crumble at home.

And this from the article:

Twice, James saw an open Ray Allen, waiting for the ball. Twice, James had his pass deflected by David West. Two plays, two turnovers, and soon the Pacers were strutting out of American Airlines Arena with a hard-earned 97-93 victory over the Miami Heat and a 1-1 tie in the series.

My patois not bad for a yankee boy, eh...

Ps, the 3rd is in Sweet Water, not Kendall.
Geography

Read in another language

Location in Miami-Dade County and the sta Florida

Sweetwater is a Miami suburban city in Miami-Dade County, Florida, United States. The population was 14,226 at the 2000 census. As of 2004, the population recorded by the U.S. Census Bureau is 13,992. [2] Sweetwater is home to the largest concentration of Nicaraguans and Nicaraguan Americans in the U.S., as a result it is locally known as "Little Managua". [3]

According to the United States Census Bureau, the city has a total area of 0.8 square miles (2.1 km²), all land, until December 2010. The city tripled in size upon the annexation of additional areas, including where Dolphin Mall is located. The annexed area is roughly bounded by Northwest Seventh and 25th streets, 107th Avenue and Florida's Turnpike extension. [5]

Sorry but, no fan of Alex Michaels. He thinks laws don't apply to him. I watched him push a few judge's "buttons" and i think he has no respect for laws or ethics rules.

Maybe a day in jail will get the point drilled inhis head but, i doubt it.

The 3rd DCA is not in Sweetwater, it is right at the western end of Westchester, an unincorporated area of Miami-Dade County. Sweetwater's southern limit is the canal just north of 8th Street, which is the northern limit of Westchester.

This just in . . .Jim Morris, coach of the Miami Hurricanes baseball team, will announce his resignation in a press conference scheduled for Wednesday morning at the Hecht Center. Gino DeMare to be named interim coach while a national search is conducted for Morris' replacement. Mark Kingston, head coach at Illinois State, will head the list of those to be interviewed.

PCA's and cases with published decisions are two different things. Just do a Westlaw search and you will see that reversal for new trial in a criminal case are few and far between at the 3rd DCA.


I guess your weekend wasn't as complete as you thought. Last I checked Sunday was still part of the weekend. And this weekend ended with the Pacers getting their heads handed to them. So much for the Pacers not losing a single game at home in the playoffs. So much for their brief home court advantage.

As I have been saying for the past month, Rumpole gets to come out of hibernation once or twice a series and then he goes back into his cave while the Heat just keep on winning.

What was amazing about this game was the bench still didn't deliver their 35 point average. It was the heart and soul of the Heat, U. Udonis Haslem. Three points in the first two games. And 17 tonight.

And two final words about the Heat players: Birdman, Birdman.

Do you really expect, and do you think that the fans expect, the Heat to go through the entire playoffs without losing a single game? Sure, I'd love it if the swept the whole thing but that is unrealistic. You look really childish each time you celebrate LeBron missing a shot.

You know what I expect? Based on the fervor with which the Heat fans write on this blog how much they love the Heat and how they loved the Heat from the beginning and went to every game before they even heard of LeBron- I expect those fans, with three seconds left and their precious Heat down by three, to sit their asses in the seat and root for their team instead of walking out while trying to look at the action over their shoulders or on a TV screen. But this town of front running phonies would rather leave so as to not sit in traffic for an extra ten minutes then cheer on their team. And this from the same fans who write here how devoted they are to the Heat. Yeah. They're devoted, right up until the time the season isn't fixed and they're not guaranteed the best players in the league and a guaranteed spot in the finals. You phonies make me ill.

Last night the Fieldhouse was empty before the buzzer went off to end the first game. Are they not real fans in Indiana either?

Dude, if my team ain't winning, I would rather be at a bar scoping out the hotties. There us nothing wrong with being more enthusiastic when your team is winning. This is not college sports, which is different because in addition to rooting on the team, you are supporting your school. I don't feel one but sorry for not having gone to a marlins game since they were playing for a championship or listing to the panthers when they were playing for the cup. These guys are paid a lot of money to be our champions and if they ain't winning, I would rather spend my money somewhere else...except football, I actually enjoy football enough to want to watch the games and cheer my team even if they aren't that great. playing for a championship makes it worth while and it is the same in any city you talk about...the only reason teams that are not performing well have good attendance in some other cities is because there ain't nothing else to do in those Shit towns.

na nana na na. How is that turd sandwich Rump? Whining and crying is getting to be a rite of spring for you.

Rumpole is melting in the Heat's heat.

I believe that J. Ramirez was employing a mode of expression called "irony." Marshall, 45 So.3d 470, to which he refers,was a PCA, accompanied by a lengthy dissent from J. Shepherd. Rehearing and rehearing en banc were both denied without opinion. Cope wrote a concurring opinion, noting that there was a "substantial question" which should have been heard en banc. He discussed the merits of the issue, and concluded that the conviction should be affirmed.

Gersten wrote a lengthy dissent on denial of rehearing. He concluded by stating that the Florida Supreme Court needed to clarify the issue. Of course, the PCA prevented that. It was this opinion in which Judge Ramirez concurred.*

In his post, J. Ramirez pointed out that this was a "developing area of the law." In this context, perhaps he did not mean to be taken literally when he said:

"Of course, I would never suggest my former colleagues would resort to such a questionable practice. I am sure the panel had good reasons for not writing."

I realize you were probably being ironic when you said that Ramirez was "leaping to the defense" of his former bench-mates, but the irony may have been lost on those who didn't get a chance to read the opinion.

"But for Judge Shepherd's dissent, this case would have passed into jurisprudential wasteland. That wasteland is the amalgam of P.C.A.'s that are piled up and indistinguishable from one another, so much so, that a P.C.A. renders a case meaningless to all but the parties and advocates who argued the case.

"To that end, Judge Shepherd's dissent brought this P.C.A. to life. Judge Shepherd's dissent brought enough context and meaning to me, that I felt compelled to write yet another dissent on denial of rehearing en banc. This dissent, at least, let's Henry Marshall know that others listen to his plight. These others feel that the importance, predictability, and purity of law are noble goals for judges and justices."