ALL THE WORLD'S A STAGE

All the world's a stage;

and all the men and women merely players;
They have their exits and entrances;
And one man in his time plays many parts....
And then the justice,
In fair round belly with good capon lined,
With eyes severe and beard of formal cut
Full of wise saws and modern instances,
And so he plays his part.
"William Shakespeare, As You Like It." 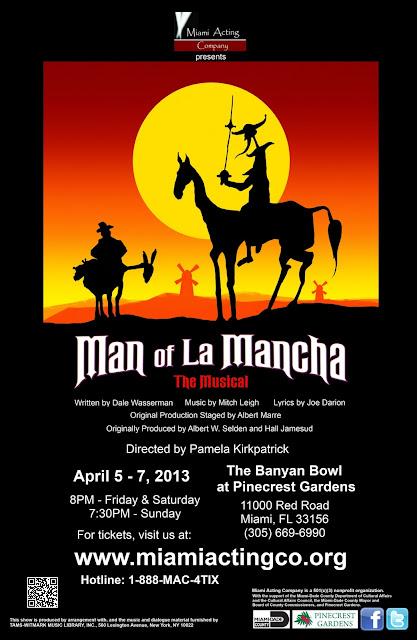 The Miami Acting Company, of which Judge Bill Altfield has something to do with, is staging Man of La Mancha this weekend, and we have heard that there are a few REGJB regulars sprinkled throughout the cast.

It's either that or the Marlins, and this seems a better value.

Dr. Samuel Mudd was the physician who treated actor and presidential assassin John W Booth for the leg he broke when he jumped on to the stage after shooting the president. Mudd had also met Booth prior to the assassination. Mudd was later convicted of conspiracy. Blog trivia: What local prison did Mudd serve his time at before President Andrew Johnson pardoned him?

Will Rumpole be at the play? Well, you can always Dream the Impossible Dream.

See You In Court, making the impossible possible.
Posted by Rumpole at 8:34 PM
Email ThisBlogThis!Share to TwitterShare to FacebookShare to Pinterest

He was housed at the fort which later became a prison on the dry tortugas.

And the name of that fort?

I wouldn't think of Ft. Jefferson as local, more like near distant. But interesting enough Mudd missed aquittal and the death penalty by 5-4 vote. Johnson pardoned Mudd because of the work he did treating fellow prisoners ex-soldiers during a Yellow Fever Outbreak.He lived 14 more years after being released from prison.

New County Court Judge in Destin suppressed a urine in a DUI case last week and cited a Kotzin motion in a footnote. It lives!

why under your profile do you claim that southern district blog is YOUR blog?

3 pm on a Friday. 20K in fees this week. Got a cold six pack waiting. Shumie time.

Female lawyer here- late 20's. Since law school I have had an affair with an older powerful lawyer separated who has mentored my career, seen that I have gotten a good job and helped me with my cases. I have benefited from his help, I am physically and emotionally attracted to him, and although I acknowledge that he has helped me get my job, I have had the job for three years and been promoted and all of my subsequent success has been because of my hard work.

I write this in response to last weeks discussion about a website where men pay young women to date them. in my case I was attracted to my boyfriend, but I also was calculating that by engaging in this affair he could help me professionally. It has worked out for me in both regards.

3:33 Glad it worked out for you. You're just as much a slimeball as the guys who were talking about using that site.

Call me crazy, but didn't DJ Cannava become a County Court Judge like three weeks ago? Maybe he should put a couple of years in before applying for a raise?***

***To be fair, Judge Cannava has been on the bench for 15 months.

Cannava hasn't gotten the County Court/DV basics down yet and he now feels he is competent enough for Circuit Court? Meanwhile Wendell Graham has been a county court judge for what? 20 years? Can somebody do the math?

Capt. save all your brain cells, energy and logic, Rick Snott will apooint another prosecrazy hack.You and I both know it.

I've self published the explosive new best seller- "Up In Smoke- the murky world of Miami Cigar Stores". It's now in Shumie's cigar store.

Chapters include
"Pardon my Perdomo"- how powerful secret political forces stopped the marlins and dolphins from having cigar friendly sections of their stadiums.
"The great lighter scandal of 2010"
'Cuban Ruben" the mysterious ex-spy behind all of the cuban cigars in the US.
"Ashes to ashes" how the cigar cartel controls who gets to open a cigar store and where, and
"All wrapped up" the real story of those cuban cigar wrappers.

Please support me and buy the book before the dark powerful forces force it from the shelfs of bookstores.

Hey UAM............why don't you share your brilliant analysis of each of the judges Rick Scott has appointed. LOL

Rump, 150 lawyers in 4-1 yesterday for the FACDL Mock Trial and not even a peep out of you.

Better yet share your analysis faux neaus style tell how much you like Snott's appointment and hows hes your favorite Governor since Napolean Broward and Charlie Johns.

OMG that is the funniest thing ever.

Watching the game right along with ya Rump. Wichita State has some hottie co-eds that they keep showing. Who would'a thunk that?

Love this guy pretending to be UAM. Throws grenades, doesn't bother to support his inanity with facts. Of course, since he's not a lawyer he hasn't actually appeared in front of a single one of the Rick Scott appointees he's bashing. LOL.

If you're not following @draculawyer (Fake Alex Michaels) you're missing the best of twitter. Here are some examples:

Fake Alex Michaels ‏@draculawyer
I sometime think my whole life should have accompanying soundtrack: "How do you like me now" repeating over and over. Vould vork vell.