Over the weekend, very quietly and without announcement (at least no one told us) the Miami Dade Department of Health that boarders one part of the parking lot that attorneys and police officers use, broke down the fence line, and constructed a new fence line taking the entire first row out of parking lot 26. You can see in the pictures that an alert reader emailed us over the weekend, that workers were busy all weekend. By the time you arrive on Tuesday, your ability to park will have been reduced by approximately 33%. And in a parking lot that often runs out of spaces on Mondays and Tuesdays, the loss of spaces is a big deal. 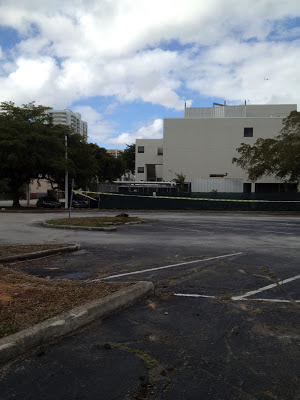 In this photo you can see the yellow tape where the workers were installing a fence. The entrance to the lot is on the left.  The parking spots lost would be everything above the tape- the first row as you enter the lot. 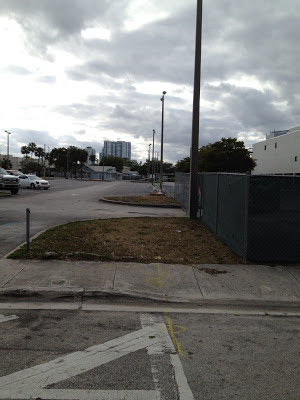 In this photo- facing the entrance of the lot and the courthouse behind the photographer- you can see where the fence has already been installed on the right, taking away the first row. By Tuesday, the deed will probably already have been done. 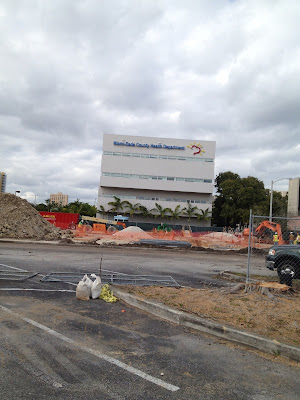 Another shot showing the fence installed on the far right of the photo and where the fence will be going. All of the spots above the fence in the photo- the first row- will be lost.

Who did this? Who authorized this and why? Does Judge Soto- the hero of the initial (and infamous) parking lot crisis about a year ago- know about this? Where will we park? Where will young ASA's toting their carts from County Court while gripping their Starbucks latte's walk?
Stay tuned for the answers to these and other questions. And for those of you following us over the long weekend on Twitter @justicebuilding and were expecting our story on the proposed new development of the "gritty" neighborhood around the  courthouse, it has been delayed a day based on these photos which were sent to us by a Rumpole spy.

See You In Court, once we find parking.
Posted by Rumpole at 6:48 PM
Email ThisBlogThis!Share to TwitterShare to FacebookShare to Pinterest

The Miami Beach cop and the meth dealers: a tawdry tale

FROM ROY BLACK'S BLOG
( pics blocked, this is a PG blog)


As if there are not already enough reasons not to support the Republican Party here is the clincher. They are against breasts! Yes you heard me correctly, breasts. What is wrong with these Neanderthals? I for one am willing to take on this crusade and stand up for naked breasts. One man with courage is a majority. Anyone who wants to join my crusade can sign up here in the comment section.

WE NEED TO HIRE THE Q. QUICKLY!

Rumor was that Judge Soto's wise counsel and mediation of this contentious issue- working her brand of shuttle diplomacy between several police departments, the City and disgruntled defense attorneys brought her safe resolution of the great 2012 Miami Parking Crisis that many in the Obama Administration thought she would be the ideal surprise candidate for Secretary of State. But Soto quietly put the Kibosh on speculation when she realized that Brown would be leaving and she could be Chief Judge.

I could care less- I get there every day at 7am. Plenty of parking. Hahahha.

Trivia: Who is excepted in the 13th admendment from the ban on involuntary servitude ? No Checking Westlaw nor your Constitutions.

And parking will only get worse if that deal for the Mahi Shrine buliding goes through. Did you see DBR article?
Multi-story retail with 400 condos.
Maybe it will give us some good places for lunch.
Would be a good idea....If it weren't for the fact that we have an already overcrowded courthouse right across street that relies on that lot for parking.

Parking is getting dire

Oh yes, I really really want to purchase an apartment on the Miami river one block from the DCJ.

When I am sick of being asked for money from recently released inmates in deep blue hospital gowns; being robbed by their friends waiting to bail them out; stuck in God awful traffic because of the nightmare that is called the 17th Av. bridge; counting the rats going in and out of the jail and REG building at sunset; and, watching a-hole lawyers drive by in their porches (that are about to be repossessed because JAC rates are going nowhere)...I can retire to my riverfront porch to count the headless chickens and other Santeria sacraments float by on their way to beautiful Biscayne Bay!

Please, where do I lay my deposit.

Parking wouldn't be a problem if we all arrived by helicopters. Think about it.

2:03 pm: for best post! if the psychos do get you toxic waste in the river will.

If you build it section 8 will come

Ever think of public transportation a--holes?

Best thing that could happen would be the construction of an actual parking garage on that lot. 5 or 6 stories, give ASAs and PDs a pass to the top two floors, sell the rest of the passes. Give jurors a discounted rate.

That's how it's done in Chicago.

Here is the link to the New Times Story on the ASA & Goldrush.
really who uses caredit cards at strip clubs?