Some love it.
Others, like film maker Billy Corben, come away from their first exposure to our humble abode shaken and a bit weak kneed.

It's fashionable to trash our old courthouse. No longer the belle of the ball, she sits un-admired and scorned like a wizened southern deb wearing a hat a few decades out of fashion. Three new Federal Courts have risen in downtown Miami while the MJB plugged away; even Broweird has a new Courthouse, albeit one staffed by the same tired old Judges. West Palm has a magnificent edifice to justice. And the Orange Bowl has come and gone and been replaced by a new Marlins Stadium. All the while the MJB has taken in the expanding Miami justice system-squeezing in a new courtroom here- a small chamber for a judge there. For many years the PDs were on the eighth  floor while the State Attorney's had offices on six and nine. Who remembers the old fishbowl in front of the elevators on six?

But our courthouse was not always an aging embarrassment. With a very big hat tip to the Random Pixels Blog we present to you "Taj Metro"

Miami News Editor Bill Baggs presented a decidedly different view of the new criminal courthouse when construction was completed on the eight million dollar courthouse in 1962.
Baggs raved about the 250 foot long pool gracing the front of the building: he speculated that then UM hotshot QB George Mira could not throw a football the length of the pool. The interior of the courthouse had a glass mosaic from Mexico and marble from Italy. The marble of the pool was "Etowah Pink Marble from Georgia."

And the courthouse was roomy! Baggs speculated that the Green Bay Packers could safely scrimmage in the hallways. Why no reference to the hometown Dolphins? They weren't in existence when our courthouse opened. Don Shula was an unknown name, as was Bob Griese, Mercury Morris, and Larry Csonka. Dan Marino wasn't even a twinkle in the eyes of his parents who hadn't even met yet.

Just how swank was our new courthouse? Not only did every county official want an office in the new place, but according to Baggs "The walls inside the White House are not nearly as elegant..."  And this was a White House being restored by Jackie Kennedy at the time.

The courtrooms on the second floor were an awe inspiring "two stories high" inviting some infighting  among the various judges to secure a prestigious venue from which to adjudicate the day's calendar. Just how big was this amazing  courthouse? The ninth floor remained vacant when the courthouse opened. Baggs wondered whether a nine hole golf course would be installed?

The entire article is below for you to read. Just remember that she may be a bit tattered and aged, but this old gal has served our community well for fifty one years.

See You In The Court we have loved more than any other. 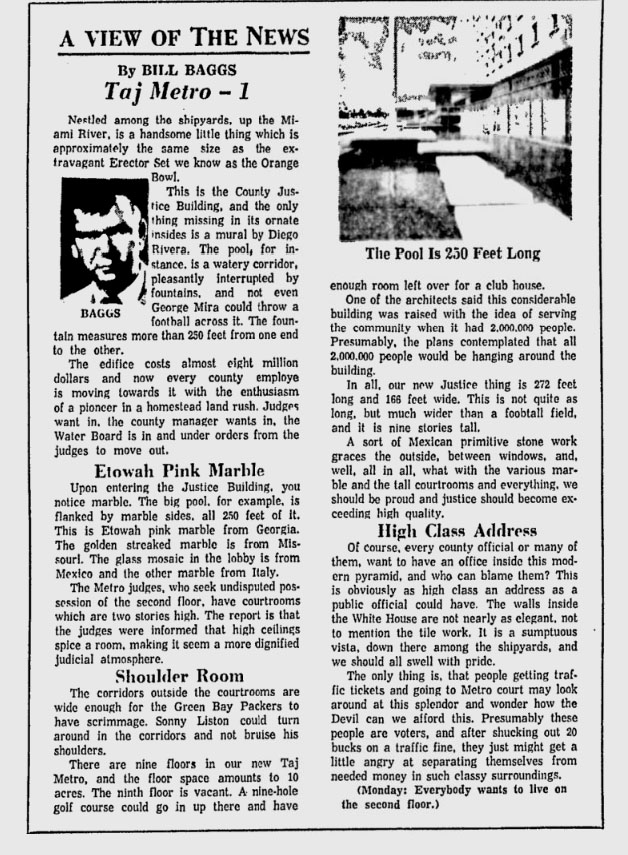 Posted by Rumpole at 4:00 AM
Email ThisBlogThis!Share to TwitterShare to FacebookShare to Pinterest
Labels: Justice Building

Your post is nostalgic Rump. There were days when Hialeah, Allapattah, Overtown and what is now known as little Haiti were bustling suburbs. But was with all things, time has taken its toll. Everything has aged. Our poor Courthouse has found itself an eyesore in an area increasingly dominated by Hospitals, clinics, medical research facilities and a medical school. Downtown has been revitalized and reinvented into some chic and sexy. Yet we continue to toil in the tired halls of our beloved justice building. The County has built or remodeled three arenas and stadiums during this time. When shall we get a new courthouse?

According to the article one of the architects said it was designed for a community of 2 million people. I guess that was 1960s Miamians. Not 1990s-2000s Miamians.

Rump,
Excellent post on the MJB. I am engaging in conversations with various state senators from Colorado, the parks director from Pembroke Pines and two deputy clerks in the civil division whom I met on the Metrorail. We are working on a comprehensive plan to raze this building and erect a building worthy of those laboring to seek the truth. I will get his done.

This post has me in a nostalgic mood. Can someone give me some updates on Howard Sohn, Howard Pohl, Howard Rosen, Stephen Rosen, and super hot interpreter Edna? Va va va voom.

Now I guess I know who Bill Baggs state park on Key Biscayne was named after.

Anyone remmeber when the pool had water and running fountains?
That was nice , unless you fell in, and got your shoes wet. It was 6 inches deep.

I remember Edna in the late 80's. She wore fishnet stockings. She had that lipstick that made her a dead ringer for Jane Greer. Within the realm of reality, my ultimate fantasy was to have a two week trial 8 hours a day with a non English speaking defendant and her sitting there with her legs crossed.

Dan Marino was born on September 15, 1961. So his parents did meet before 1962 and must have done the "dirty deed" sometime in January, 1961. At least a year before the MJB was opened.

Note to Gov. Scott - Looks like the US 11th Circuit has upheld the Injunction against FLA doing drug tests for Welfare applicants.

"The evidence in this record does not suggest that the population of TANF recipients engages in illegal drug use or that they misappropriate government funds for drugs at the expense of their own and their children's basic subsistence," the three-judge panel wrote. "The State has presented no evidence that simply because an applicant for TANF benefits is having financial problems, he is also drug addicted or prone to fraudulent and neglectful behavior."

I think MJB has got some character, it just needs a good cleaning, and fewer stinking dirty defendants.

The 11th Circuit is right...until the SCOTUS tells them they're wrong.

Come to think of it, none of you defense lawyers ever commented on the dog sniff case where a UNANIMOUS SCOTUS hammered the FL supremes for their ridiculousness

Priorities; Let's see, the Orange Bowl has been replaced by not one but two stadiums. The Arena was built, used, replaced and demolished. Mass transit (kind of) has been built; Both the City of Miami and Dade County built new buildings to house their offices and they have just rearranged the asbestos at MJB/REG!

Looks like there is a part 2 to the story, Monday edition, can you run that as well?

It would have to be semi-eponymous since ST doesn't contain his full name. DUH!

Why can't we as a community, and in particular, the criminal defense bar/prosecution, work together and ask our local politicians to get us a new court house? We have so many movers and shakers in this small sect, that it can surely get done.

Can't we have City Commissioners propose and pass something of this nature? It would be a feather in the cap of this blog if it led to a new building in this community.

Antonin Scalia is a rotten jerk. His ego is inflated and his moral compass is in the shitter. What I find very contradictory is that in Joseph Bonnano's autobiography he state's that Scalia's father and he were very good friends they ate, visited with each others family and smoked cigars together and Judge Scalia and his son would pick up the butts to the cigars thinking they were unnoticed. Judge Scalia's father had some questionable ties to the New York mafia and he walks around like his shit doesn't stink. The voting rights act "is a perpetuation of racial entitlement"? How pompous, bigoted, and absurd.

Here's Part II of Bill Baggs' column for those who asked.

I nominate as 11:01's comment as the most ridiculous (if not the whiniest) serious comment in the history of this blog.
What's the quickest way for a city or county commissioner to face a recall election? I'll give you one guess.

Two more PDs left the office today. Steve Harper (20+ years) was the head of juvenile before Marie Osborne and has been working in CLU for awhile now. He's a great attorney. Wish him well at his new job teaching at FIU. Shelley Marlowe (10 years) left today also. She was a training attorney in juvenile for awhile. I learned a lot from her and am sad to see her go. I'm guessing she'll be back - she's leaving to stay home with her kids.