THE BELL TOLLS FOR THEE


UPDATE: An emotional Judge Thomas sentenced the defendant to death this morning.

This is Ana Maria Angel. 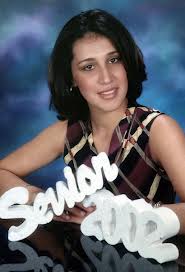 Shortly after this picture was taken her life was ended by pure evil.

Today (Thursday) Joel Lebron- the killer who raped her and shot and killed her on the side of I95 while her hands were clasped in prayer for her life will be sentenced by Judge Will Thomas to either life in prison or death by lethal injection.
Today will mark for Ana Maria Angel's family the last of a decade of court appearances while the five men who tortured and killed her had court hearings and trials.

Today, regardless of the sentence, justice finally and hopefully is concluded in this horrible crime.

There really is no justice to ease the terror this poor girl went through in the final minutes of her life and there is nothing that can ever be done to ease the pain of her mother who knows all too well how her daughter was murdered.
But today the world can stop thinking about her killer - because he is meaningless- and remember this young woman- because she is not.

Perhaps this is a surprising post for this blog, ostensibly run by a defense attorney. But this blog is not a defense attorney blog. It is a blog about the Richard E Gerstein Justice Building and those who work here. Our thoughts about this heinous crime should neither be surprising nor misconstrued. There is a difference between a lawyer who represents a client and a person, who had no involvement in a case. We had no involvement in this case (so you can strike the defense attorneys off your "who is Rumpole?" list) and express our sadness at this tragedy and our shock and horror of the details of the crime as a citizen of Miami, and not as a defense attorney.
The praise in this case is due to Prosecutors Abe Laeser, Reid Ruben, Laura Adams, and Christine Zahralban, who spoke up for justice for Ana Maria Angel.


Don't forget about the Bench and Bar mixer tonight at Tobacco Road. Details on the prior post.

Posted by Rumpole at 2:30 AM
Email ThisBlogThis!Share to TwitterShare to FacebookShare to Pinterest
Labels: Ana Maria Angel

Great post. Only one problem...........justice won't be concluded. We can expect years of appeals at the least, more than a decade if the judge sentences this animal to death.

For Lebron we should Bring back Old Sparky and give him a dry snythetic sponge to boot.

His partner caraballo claimed he did not rape his victim but rather masterbated so he would not contract Aids. His brother with Aids had just raped her and didn't want seconds. He still awaits his second trial so the horror will continue for the family. I would love to flip the switch on anyone of the five.

Because it's Thomas the sentence will probably be CTS (in Thomas' mind the Defendant has already been in jail a long time) and an anger management course.

I am wholeheartedly in favor of a death sentence in this matter.

and facdl finds the death penalty repugnant to their world view.

Hypothetically, had this dbag piece of garbage gone to trial and was found "not guilty" would you still congratulate the defense attorneys on a job well done - as you have done in other cases?

I am not in favor of the death penalty, but for these animals I would flip the switch myself, go home, drink a warm glass of milk and sleep like a baby.

Yes I would have said job well done. Especially considering the facts of the case. And that would have been my professional view. And my personal view would have been great sympathy for the victim and her family. And never the twain shall meet.

Not even prosecutors are safe. This is crazy and getting out of hand.

BTDT said it correctly. And Judge Thomas did follow the jury recommendation and sentence Lebron to Death. Now the case goes to the Florida Supreme Court and on from there. And if I am not mistaken, there is still one more defendant left to go to trial? The victim's family will, unfortunately, be living this case for many more years to come.

Now this bell tolling softly for another,says to me, Thou must die.

If I were a retributist, which clearly you are Rumpole, I would agree with you. But being the Utilitarian that I am, I see no deterrent effect nor any realistic thought process that justifies the death penalty. Not because I am morally against it, it is just, as Justice Kogan has written, that death just does not work.

The truth is we spend too much time, energy and money trying to execute these defendants, and we still have 600 of them on death row. It is time that we recognize that it is far greater punishment to lock these people up for life, put them in the general population, where they are subject to all of the problems that go with it and let them rot.

Let them spend their lives in the misery that is our penal system and think about what brought them there. Most of them are not the tough guys they like to think they are and life being someone's bitch will make them wish they were dead.

It makes us feel good to hear the sentence and believe that justice is served for the victim, but we only delude ourselves. It could take 30 years to execute these guys. Somehow that should not satify even the blood thirstiest of our society. For example, Rumpole, this defendant may outlive you.

How about a public beheading on live TV?? Do it now--and not in 2040! Unfortunately this POS will still be alive at our expense long after her parents and most of us are gone!!

Let me say that I respect judge Thomas. He has always given me a fair trial on the merits. I rarely agreed with the sentences he imposed, but that was his job and not mine. I write to ask if anyone reading was in the courtroom for today's sentencing. The herald article really painted an unusual picture of Judge Thomas's temperament during the sentencing. I am not expressing an opinion one way or the other, but I just wanted to get it from someone who practices law to see if the Herald article is accurate.

Also, if judge Thomas made the comment "God Bless you" to the family, was it to Lebrun's family, Angel's family, or both? The herald article isn't clear.

I say that I'm shocked.

Why wasn't Thomas willing to give Traverso his hard earned sentence (not death, but the six years that the family of Aaron Cohen asked for)?

What's with the crying? He cried today, he cried the other day when sentencing Traverso to essentially CTS...

2:46- I cannot refute your criticism of the death penalty. I can categorically refute your contention this individual will outlive me. BP 110/70. Low C-reactive protein and homcysteine scores. Very low LGL, fairly high HGL and pattern A LDL size (which is the best type). Resting heart rate of 58. Almost a zero score on my body coronary calcium scan. I will be around long after this person is dead.

I can't categorically say I disagree with the death penalty, although I freely admit it is a broken system in this country and does not work. But being in the business of criminal law for half my life as brought me into contact with a very few people who are so evil that their conduct deserves death. I know my thoughts are contradictory, but then, so am I.

If you feel that you would have no emotions when saying words that will kill another human being then I think there's something wrong with you. Good judges are not robots and realize that what they're doing affects real lives. That Thomas felt human emotions as he ordered a man killed is something to praise, not mock.

Again, David Von Drehle's, "Amoung the Lowest of the Dead: The Culture of Death Row" merits reading.

How can anyone mock Judge Thomas for displaying emotion in the face of a case like this? The power to pronounce a death sentence is immense, and at least Judge Thomas showed humanity in doing so. He is an outstanding person and judge.

There is NO DETERRENT in Punishment.
After 25+ years the one thing I have learned is that NONE of my clients considered the consequenses of their actions PRIOR to committing thier criminal acts.
They dont even get that they are facing punished for what they did after they are arrested and charged .
' Its too much for my crime...'