Altruistic Collectivist Ethics. The standard Objectivist response to any governmental social program paid for with taxes.

When Mitt Romney, in his now infamous put down of 47% of the american public, disparaged those who believed that government owed them food, shelter, health care, internet access, he was speaking the language of Objectivists. He was saying that Obama's belief in the governmental safety net was Altruistic Collectivism, and that altruism and collectivism are Obama's ethics. (Mitt just couldn't say it like that because he's never read Rand's non-fiction Introduction to Objectivist Epistemology.)

Enter Bruce Springsteen and his current hit anthem "We Take Care Of Our Own". The Springsteen song was played at the end of Obama's speech, which marked the end of the 2012 DNC convention.

What would Ayn Rand say about "We Take Care of Our Own"?
She would like it. Ayn Rand loved patriotic songs.
Rand didn't disparage altruism. Her romanticism was such that she conceived of a heroic love such that one would willingly  lay their life down for another or a treasured ideal. Rand disparaged altruism as a political philosophy in which the state compels its citizens to act altruistically (taxes for food stamps for example), not as a personal choice.

When Springsteen talks about yelling " 'help' but the cavalry stayed home" and  "There ain't no-one hearing the bugle blown" one could say that he is disparaging the government's failure to answer the call of the bugle; the failure of the cavalry- the failure of the army and government to rescue New Orleans and the tragedy of the Superdome.  And yet: "we take care of our own."

So who is doing the taking care of, if not the government?
In Springsteen's song, "We" are. Each of us, as Americans are taking care of each other, not because we HAVE to (that would be A.C.E) but because we WANT to- personal choice.

Personal choice, responsibility, and lending a helping hand.  Mitt Romney sneers those values while menacing the less privileged as he dines with billionaires. Meanwhile Springsteen sings of the glory of a nation pitching in and choosing to help each other because that is what Americans do: we take care of our own. Similar ideals expressed in very different ways.


Wherever this flag is flown 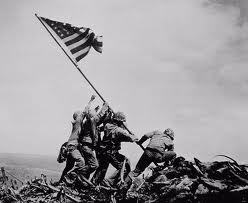 We take care of our own.
Posted by Rumpole at 3:30 AM
Email ThisBlogThis!Share to TwitterShare to FacebookShare to Pinterest

Every time I read Rand, I throw up a little in my mouth. Nasty woman.

Have you ever read her wrirings on art, music, love? A troubled woman for sure. But a genius in her own right.

I enjoy all these people that love Reagan and also quote Rand like if she were a prophet. The irony is a trip. Rand hated Reagan. She referred to Reagan's administration as an "appalling disgrace." See for yourself: http://www.youtube.com/watch?v=4196WvmEcYM

wanna bet bigduh has no clue who ayn rand is?

Ayn Rand disliked Reagan because she was NOT a conservative. She was philosphically consistent and to her Reagan was an atruist collectivist. Its just that to her his ox was gored on different matters than those that mattered to liberals. Rand dismissed liberals and conservatives as movements sharing the same philosophy and divided only by the particular issues that matters to them.

PROS: fits with my schedule, only one hour a week, don't have to buy a book, no quizzes, guessing an easy A, lefty girls who like to party will take this class.

I think we should give all of our money and property over 30,000 a year to the needy. Problem is I wonder how many others would be willing to do the same to support the noble 47%.Thank God we have Obama. He knows the answer - just print more money.

I hate you. I won't read your blog anymore. I won't follow you on twitter anymore. I think your blog stinks. It's poorly written. And you're just poor.

Dear Mom:
I've told you dozens of times you do not need to read the blog. But thanks for writing. Hope all is well

Judge Ellen Leesfield and Judge Victoria Platzer have both announced that they will resign their seats around January of 2013.

Both will join former Circuit Court Judge Izzie Reyes at the Reyes Law Firm. Reyes has also confirmed that TV Judge Alex Ferrer will join the firm as well.

Alex will keep his day job on the Judge Alex show. The show tapes for eight weeks a year so he has more than enough time to handle his new gig which will considt of being a private judge at the Reyes Firm where they specialize in mediations and arbitrations, and act as special magistrates and insurance umpires.

In case you have not been keeping count, if you include these two openings with the three current ones, that will mean that Governor Scott will have appointed 21 Judges in his first two years in office in our Circuit alone.

That is a staggering number and one has to look no further than the caseload and resources that Judges are currently facing in 2012and beyond.

An average Circuit Judge in the General Jurisdiction Division is handling over 6,000 cases, the overwhelming majority of which are Foreclosure cases.

Judges are fed up and at the end of their patience level when it comes to their workload. Can you blame them?

What is the answer? We already have 123 Circuit and County Court Judges in the Eleventh Judicial Circuit. Will the Legislature provide the money for more Judges in the near-term? Unlikely!

Anyone want to chime in with an answer, feel free.

Until then, we will continue to lose seasoned judges like Leesfield and Platzer to the private sector and many times they will be replaced by the 30 somethings who have barely a decade of legal experience.

RUMP: What would Rand have to say about that?

But your mom (2:29 PM) is a senile jerk. She reminds me of lifeless, empty vessels that lack meaning and purpose.

Man accused of having sex with donkey now wants animal back

A farmworker accused of having sex with a miniature donkey wants his seized animal back in his hands.

Doodle, a 21-month-old donkey, was taken into custody by Marion County Animal Services, according to a report on Ocala.com.

"I want my donkey back. There's got to be due process here. I paid $500 for her," said Carlos R. Romero after his first appearance Tuesday morning in front of a judge.

Romero, 31, is charged with animal cruelty and is in protective custody to keep him away from Doodle, who appears to be in good health and may be put up for adoption, according to the report.

Farm owner Gerald Joseph James told investigators with the Marion County Sheriff's Office that he saw his farmhand having intimate contact with Doodle in August.

Romero told Ocala.com that he has always been attracted to animals, especially horses, because people have been known to "stab you in the back, give you diseases, lie to you" and are "promiscuous."

That was a real comment. It's been that type of day. I didn't have any idea who wrote it, it was too perfect to be anyone in particular so I didn't think that, so my initial response was "Join the club".

Romero has a point:

Romero told Ocala.com that he has always been attracted to animals, especially horses, because people have been known to "stab you in the back, give you diseases, lie to you" and are "promiscuous."

But what does the donkey's neck look like when her hair is pulled back? It can't be the same.

Re: Mr. Romero's infatuation with his former donkey.

H.R. You know very well that it's not the same.

Don't worry Rump. The rest of us love ya.

Some more than others.

But he does appreciate the love. And his blog is definitely an excellent read.

the dbr scooped you bro

they are a fine bunch of judges. private practice is a different animal... a little advice to the fab four

So Rump, how do you pronounce Ayn: Ann or Ion? I have heard it pronounced both ways and I am confused.

Rump,I did get to see "We the Living" when it was played at the Miami Film Festival back in 1987. Brought out from the vault, and it was magnificent, however, still not an Ayn Rand fan.

Even though I have always pronounced her name correctly.