SAY IT AIN'T SO TOM 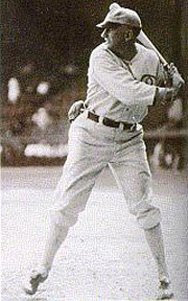 Shoeless Joe Jackson.
(there's an interesting update about David Ranck below.)
Attorney "Shoeless" Tom Risivy has been complaining for some time now that the highly trained security personnel at the Coral Gables Branch Court (Motto: "We're at Christy's. Please leave a message and we will get back to you shortly.") have been requiring him to remove his shoes before being granted access to the building.
So now we know what the Coral Gables Branch Court and the TSA at MIA have in common: a foot fetish.
The FACDL has promised to get right on this "as soon as we finish up reading the minutes from our meeting in 1996".
Query: Just what can happen at about 3 feet above sea level if a "shoe bomber" were to set one off during one of Judge Andy Hague's 4 hour PIP calendars or whatever it is they do over there?
On the other hand (or foot) it would be kind of cool walking around in court in socks for a while. It might give our sore feet a rest.
In any event here's the haberdashery update for Miami Courts: Men have to wear jackets and ties in court in the summer, but they don't have to wear shoes in Coral Gables. Something to ponder while sweating in those security lines.
See you in court, fully dressed top to bottom.
David Ranck:
As many of you know, David Ranck  recently was let go by the SAO after many years of dedicated service. The reasons behind the parting of the ways are complicated and partly contained in Judge Gold's order in Ranck v. Rundle, et.al. (The link is in yesterday's post.)
David Ranck has sent us a link to his new (?) blog in which he discusses at  length and in at least three parts, his handling of the case of State v. Stevenson Charles and Passion Carr. Here is the link.
Miami Herald Reporter David Ovalle will be doing a story on this, and this is apparently Ranck's anticipatory response.
Have at it.
Posted by Rumpole at 6:07 AM
Email ThisBlogThis!Share to TwitterShare to FacebookShare to Pinterest
Labels: Coral Gables Branch Court, Tom Risivy

David needs to take a vacation and relax.

The State Attorney's Office supervisors better take a vacation and let Rank be. Can you imagine the goods that guy can spill on Pohl? Popcorn party anybody?

While I wasn't around for it, lawyers who were told me that in the pre-air conditioning days, there was actually a local rule in Broward County dispensing with coats and ties during the summer months. One local lawyer wrote to Judge Chillingsworth in Palm Beach County and asked if the court there would allow the same thing. The resopnse was that, in Palm Beach County, lawyers normally showed up in jackets, ties, and, on occasion, even shoes and socks.

In my continuing effort to provide our readers with the latest news on the really "important" matters, I am pleased to announce that the JNC will be sending the following six names to Gov. Crist:

One of them will be appointed to replace Ada Pozo.

I would also like to commend Scott Saul who continues to call them as he sees them on this Blog, and do so without resorting to the anonymous tag that so many of you other hacks do on a regular basis. He sure hit the nail on the head yesterday with this quote: "It must suck being envious of somebody else. Ouchie!"

But, he's right. This Blog continues to prove that, being successful in some high profile matter, will undoubedtly lead to a few anonymous hacks spewing out nonsensical critcism that is almost always unwarranted.

If you want to have a serious discussion, at least have the courage to use your name when you criticize or respond to someone like Scott or David, etc.

Now, it's Friday, so I'm going to get in my boat and do what boaters do on a Friday!

the trialmaster endorses Joe Davis for Judge. Unlike, the others. Joe will be taking a huge paycut to serve the community. The others are seeking a pay increase because they cant make a dime in private practice. Go Joe.

Seriously, can't Ranck just sit out a while, relax and STFU?

Okay folks learn to say Jueza Perez, because da fix is in. Following the trail blazed by Vicky Brennan, Gladys Perez is your next County Court Judge.

apart from his taste in music, scott saul has sublime perspective.

Captain, thanks for the update.

I agree with 11:26, Gladys Perez was assistant attorney general and assistant general counsel to the governor and is likely to follow the footsteps of Brennan.

What happened to Billy Altfield? Joe Davis is a home run for the JNC and would make a terrific judge.

Anita Margot Moss works with Flowler, White; they should be able to help her out and she would do a good job too.

Just how many Porsches does Kenny Weisman need???

The Rankmaster is calling out the Trialmaster to an oral advocacy duel. We will each prepare and perform a direct examination of an entomologist at ABP Monday at noon. See everyone there.

Anyone who has had any problems with Det. N. Pimentel please contact Alex Michaels @ 305-324-0547 or 305-968-9733. Det. Pimentel is in homicide now and use to be a narcotics Det any info is welcome. Det. Pimentel has a habit of telling people that he "F--KS" the wife, mother or daughter of who ever he is talking to sometimes in a very descriptive way.

Again thank you and please contact me ASAP if any info.

thats why judge chillingworth ended up in the gulfstream.

Don't get me wrong here, because I like Mike Braxton. But does anyone else find his website funny?

Facts: The defendant was stopped for speeding and failing to maintain a single lane. The officer observed an odor of alcohol, slurred/slow speech, and bloodshot/watery eyes. The defendant refused both the field sobriety tests and the breath test.
Defense: I bench press more than both ASAs
Result: The State Dropped the DUI on the morning of trial.

The metal detector at the Coral Gables courthouse has a very sensitive setting. If it beeps, they make you put the shoes into the X-ray machine even if you show them your Florida Bar card because those are the orders that they have. Someone needs to talk to GSA facilities management to fix the situation. Hector Flores? Rick Freedman? Anyone?

Mike Walsh brags that he went to jail for killing a cat. Now he represents someone that the state says is a cat killer. ONLY in Miami could this be true.

Ya got that boom boom shum? said...

Black Eyed Peas: I got that boom boom boom

REGJB Regular: I got that Shum Shum Shum

BEP: I got that boom boom boon

REGJB REG: I got that shum shum shum

BEP: you got that shum shum shum?

REGJB: you got that boom boom boom?

REGJB: Ya I got that shum shum shum

(as sung to David Miller the other day)

Anyone who has a problem with Alex Michaels please......computer crashed.

The JNC passes along one white guy and five minority women to the governor. Joe Davis has a better chance of getting the U.S. Supreme Court spot than getting the county court spot.

Tamara Gray? Are we that desperate?

How can a career felony screening unit prosecutor beat out a good, ethical, hard-working prosecutor who actually tries cases like Bill Altfield?? Wait, I think I know the answer.

Rump
The appointment process is pure politics. Thats why I prefer elections, where most of the politicing is open to the sunshine; unlike the JNC and the Gov appoints .
D. Sisselman

Unlike, the others. Joe will be taking a huge pay cut to serve the community.