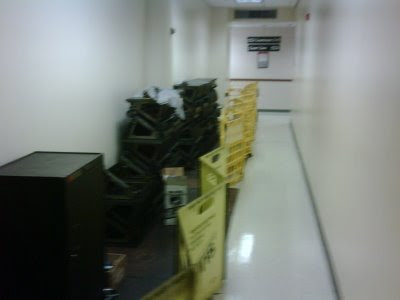 Here was the scene (sent to us by an alert reader) last week at approximately 10:00 AM. With at least three escalators out, denizens of the REGJB took bets on the 45 minute period the escalator technicians would actually stop their breaks and do some work. The winner was apparently a bailiff who correctly guessed 2:00-2:45 pm.
And speaking of hard at work, we received an invitation from Judge Deborah White-Labora regarding the 20th Anniversary of Drug Court.
As many of you know the first  Drug Court in the nation  started right here, in our building, with Judge Stanley Goldstein.  Drug Courts now number in the hundreds across the nation. And they all look to Miami Dade as the one who started it all.
Judge White-Labora extended an invitation to all of us to attend the celebrations on May 20, 2009 at the steps of the Civil Courthouse (naturally. Why hold the celebration at the actual building where Drug Court is? That would be way too logical.)
The festivities start at 8:00 AM (!!!!) at 73 West Flagler street, and despite our cheap shot about the location, it's a worthy event that should be attended.
The people at drug court work very hard. The fourth floor courtroom is not one that you will see empty at 1 or 2 pm. The hard work of the lawyers and staff goes well on into the afternoon and evening.
And the lives they save....well just imagine the downward spiral of drug abuse and crime. Calculate the costs to our society for every addict that we end up sending to prison for years because they snatched a purse or sold some drugs to support their habit. And now realize that thousands of those potential inmates are hardworking and productive citizens all because of an idea a few people had 20 years ago that worked.
The next time the SAO asks your client to make a donation....think about Friends of Drug court.  (If it's good enough for Rush Limbaugh, it should be good enough for your client.)
More details to follow on the 20th anniversary  as soon as someone tells us what else is going on.
Posted by Rumpole at 5:37 AM
Email ThisBlogThis!Share to TwitterShare to FacebookShare to Pinterest

While the concept behind drug court is laudable, it represents more of a failure than anything else. The concept is this: you got caught with drugs and that is a felony. However, we recognize that your problem is more of an addiction than a propensity to commit crime and therefore we are going to allow you to seek therapy and remove any criminal taint from your record. So far so good. But if this is true, why are we wasting our time prosecuting people for these "crimes" to begin with. If society were honest about drugs, we would eliminate drug court completely by decriminalizing possession of small amounts of cocaine and marijuana by making them infractions or second degree misdemeanors. If these people want treatment, let them pay for it on their own. It is not the purpose of the criminal justice system to spend huge amounts of police resources processing these cases and then spending additional money treating them for the underlying cause of the arrest. I say decriminalize the whole apparatus.

Maybe I'm too new to this blog, but what is that about Rush Limbaugh. Who got him to give to our local Drug Court. Wasn't his case in Plam Beach County?

Curious about local finances???
Check out the Miami herald web page,
miamifly.net
scroll down the right hand side and check out the various slary schedules for the city and county.

55 attorneys in the County Attorney's Office have a higher salary than Circuit Court Judged, and that's before the new pay cuts go into effect.

According to the National Association of Drug Court Professionals .....

In 1989, the first drug court was established in Miami, Florida, to process criminal cases of substance-abusing offenders through comprehensive supervision, testing, treatment, sanctions and incentives.

Judge Stanley M. Goldstein was the first drug court judge in the United States. In recognition of Judge Goldstein’s example, expertise, and leadership, the National Association of Drug Court Professionals (NADCP) deems it appropriate to name the Drug Court Hall of Fame in his honor. Judge Goldstein’s efforts epitomize the qualities this award seeks to honor in each of its recipients.

The Stanley M. Goldstein Drug Court Hall of Fame is recognition by one’s peers of a special dedication shown to the drug court field. At each conference, one outstanding member of our practitioner community receives this prestigious award.

Nominations and selections will be determined by the NADCP membership. Members will vote for their candidate of choice and submit their ballots, electronically, by fax, or by US mail, to the NADCP office.

etc. etc. etc.; nothing about Klein or Wetherington.

In 1989, Wetherington was the CJ and along with Klein, Reno & Brummer, they came up with the concept and Judge Goldstein was the first judge assigned to the Division.

I understand your point - we should de-criminalize. Many agree with you. Having said that, for now, DRUG COURT WORKS.

According to a study released by the National Institute of Justice (NIJ) in 2003, a sample of 2,000 Drug Court graduates nationwide showed that within one year,
only 16.4 percent had been re-arrested and charged with a felony offense.

In the last two decades Drug Court has become the most successful justice strategy for dealing with drug-dependant citizens who emerge in the courts. As a result, millions of individual lives have been saved and thousands of communities have been strengthened
throughout the nation. There are now over 2,300 Drug Courts serving 120,000 people every year. There is strong support for Drug Courts in the Obama Administration and in
the 111th Congress. Just this month Congress made Drug Court a priority, authorizing $63.882 million for Drug Court in the 2009 Omnibus Appropriation Bill. That is the largest annual federal appropriation in the history of Drug Court; a 250% increase
from last year’s mark!

Judge White-Labora is an excellent choice for Drug Court. Every person who is helped by drug court is a win-win situation for all Floridians. It keeps some people out of prison and it also helps many avoid a felony conviction which would make the remiander of their lives more problematic with respect to the stigma of a felony conviction.

I also agree that it is time for all of Florida to revisit it's drug laws. Suspending a person's license for being in possession of weed is a joke. particularly when the person's offense had nothing to do with driving. Making convicted felons out of people with small amounts of drugs is a disgrace. Hopefully the republican retards in Tallahassee will one day get their act together. This war on drugs was lost many years ago.

There are plenty of dolts who could get moved from Circuit to Drug Court. Too many, in fact.

The only drawback is that my clients like it when a dolt rules in their favor - so I say, take Blake or Scola-Hogan. No smart judges in backup, please.

Drug court has been lucky to start with Stan Goldstien, move on to Jeff Rosinek and now get Deborah White-Labora.

Three of the nicest people I have ever known and three that helped many.

One other bit of history, Hugh Rodham, (Hillary Rodham Clinton's brother) was the drug court APD for a long time. He sold the idea on Bill Clinton... and the rest is history.

Thanks for extending the invitation to the 20th Anniversary Celebration and to all your readers for their kind and thoughtful remarks. As requested here is a bit more information:

The press conference will be on the north steps of the Flagler Street courthouse this Friday, May 15th at 8:00 am. (The time was at the suggestion of our national organization to increase the chance of press coverage.) All are welcome to attend and so far we have about 150 people who have confirmed. This event should last about 1 hour.

After the press conference we will walk over to the Miami-Dade Commission Chambers at the Stephen P. Clark Government Center, 111 W. Flagler. (It is about a block west of the courthouse.) At 9:30 we will begin our graduation, it will be broadcast to courts across the state and nation. I think the graduation will be the highlight of the morning. I'm pleased to say that in addition to many wonderful presenters and guests, Judges Wetherington and Klein, along with Hugh Rodham and Mrs. Stanley Goldstein will be at the graduation. Judge Rosniek will be co-hosting with me. (We moved from REGB because we needed larger free space that could accommodate the web cast.) We have about 200 people confirmed for the graduation---so far.

We will also preview a short film underwritten by the wonderful "Friends of Drug Court" that has a lot of footage from 20 years of court and many national and international news programs. The film alone is reason to stop by but the whole morning will be great.

There will also be a reception after the ceremony at around 11:00.

PS- Judges Klein and Wetherington were the originators, with others, of the concept. Judge Goldstein was the first presiding Drug Court judge.