UPDATE BELOW: ASA David Ranck replies to the opinion and his conduct in Chapinoff. 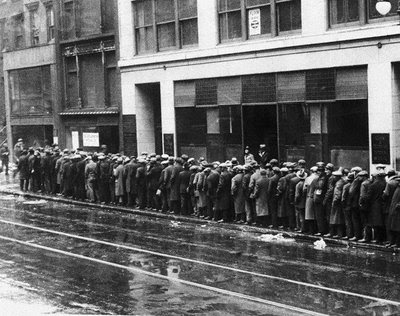 Once again we come to work on a Tuesday with a Monday off. And once again our clients will be faced with inhumanely long lines. Nothing turns people off to the court system then the perception that it is an unwieldily bureaucracy plagued with long lines,  and staffed by clerks who do their utmost to frustrate you.
Access to our court system must mean at a minimum the ability to get into the damn building.
We know that Judges Slom and Blake have worked to "slake" this problem. (get it? Slom + Blake =Slake.)
But something tells us that if all the Judges who work in the REGJB  had to wait in the same line with the  rest of our citizens, that something more would be done. Perhaps the Judges would get serious about not scheduling the regular number of cases for trial on a week that starts with a Tuesday instead of a Monday.  If they had to wait an hour or more to just get into the building, we think, and call us crazy if you wish, but we think something more would be done to address this problem.
ANSWER TO YESTERDAY'S QUIZ:
1) Nixon; 2) Carter; 3) Reagan; 4) Bush (41);  5) Bush (43);
6) Clinton.
DAVID RANCK ADDRESSES THE DECISION IN CHAPINOFF:
We received this email:
What I said in the Chapinoff trial was wrong and I am accountable for it. As a prosecutor who enforces consequences on those who have done wrong I accept those consequences when I have done wrong myself. Accountability is key in our system of justice and it applies to all of us, the president of the country, appellate court justices, circuit court judges, prosecutors, defense attorneys, and defendants. The opinion was of course personally humiliating. That's a consequence. But more so, I let so many people down: my colleagues both in my office and in the defense bar who have been so supportive of me in the past, and the standards of my profession. Most of all I let down the police officers who worked so hard on the case and the family of the victim because my wrong-doing has been deemed the principal reason that a convicted murderer is now free, forever. That, obviously, is the most important consequence.

Everyone who has written or spoken to me about the opinion has asked me "what the whole story is." Under the applicable system of accountability the only story deemed relevant is that written in the opinion.

Posted by Rumpole at 6:28 AM
Email ThisBlogThis!Share to TwitterShare to FacebookShare to Pinterest
Labels: David Ranck

Wayne Huizenga said this on CNBC this morning: "You need to think outside the box."

I think he is taunting us about Rump's identity. I am taping the entire show and perhaps if I play it backwards I can find some more clues.

Rump - Not that we need more evidence that the man-made global warming theory is a hoax perpetrated by frauds like Al Gore, but here it is anyway. Another highly trained scientist calling out his colleagues. A link to his qualifications follows the article.

Astronaut Takes Contrary Position On Global Warming
Says Mankind Isn't Responsible For Rising Seas
Former Apollo 17 astronaut Harrison Schmitt has taken a position on global warming contrary to that of many of his peers... but he's hardly alone.
Schmitt, a resident of Albuquerque, NM, told the Santa Fe New Mexican he's been invited to speak next month at the International Conference on Climate Change in New York. The former astronaut and geologist is one of 70 speakers who will present an opposing position to the belief that humanity has caused the Earth to warm at an excessive rate.
"I don't think the human effect is significant compared to the natural effect," said Schmitt, who resigned from the nonprofit group The Planetary Society when the think tank came out blaming global warming on human activities.
The "global warming scare is being used as a political tool to increase government control over American lives, incomes and decision making," Schmitt wrote in his resignation letter, asserting scientists "are being intimidated" to follow the politically-correct view that global warming is manmade.
Schmitt, 74, says geological evidence shows the temperature of the planet Earth has warmed by about one degree per century since the 1400s, with a commensurate rise in carbon dioxide levels. Changes in ocean levels and melting glaciers may also be explained scientifically, without asserting that global warming is an unnatural act, he added.
"They've seen too many of their colleagues lose grant funding when they haven't gone along with the so-called political consensus that we're in a human-caused global warming," Schmitt says.
The climate change conference will be hosted by the Chicago-based Heartland Insitute. Publisher Dan Williams invited Schmitt to speak after learning of his resignation from The Planetary Society.
"Not that the planet hasn’t warmed. We know it has or we'd all still be in the Ice Age," Williams said. "But it has not reached a crisis proportion and, even among us skeptics, there’s disagreement about how much man has been responsible for that warming."
Schmitt -- who has a science degree from the California Institute of Technology, a doctorate in Geology from Harvard, and who studied Geology at the University of Oslo in Norway -- says he's looking forward to presenting his views before an audience who has hopefully not been manipulated by politics.
"[The global warming debate] is one of the few times you've seen a sizable portion of scientists who ought to be objective take a political position and it's coloring their objectivity," he said.

Actually Dr. Schmitt is a very interesting person. He is very smart. But he also has a tendency to take positions opposite to accepted science for the purposes of challenging accepted theory and sparking a discussion. If you read several of the books about the Apollo program you will see a picture of Scmitt emerge. Therefore, I am not surprised he feels this way.

But his contention, and yours, flies in the face of what is now occurring on a daily basis. In the Polar north region, companies are now exploring areas of the ocean that have been under icecaps for the last several centuries.

And the rate of warming, contrary to what Scmitt says, has accelerated, and the observable consequences have accelerated since the 1950's. And what explains that except the accumulated carbon use and buildup?

Golbal warming is real, and nobody wants to enslave you.

You going to trust a guy named Schmitt, who is a geologist?

Rump, why are you complaining only about the line for the building on the Tuesday after a holiday. Have you seen the line in front of the building for the last two weeks? I thougt they must have been giving away firefighter jobs last week, the line was so long.

Sad to report that a long time REGJB attorney has picked up a felony dui with serious bodily injury.

Rumpole-this guy will need our support in the future, please keep the nasty comments to a minimum.

Query: An attorney gets arrested for a non-legal issue. Blog worthy?

Query: An attorney gets arrested for a non-legal issue. Blog worthy?

Depends on whether the attorney could get kicked out of the bar, among other factors.

Felony DUI seemed to be blog-worthy when George Cholakis was charged, Rump. You posted all of that tripe.

Have some better sense this time and dont air people's bitterness.

Isn't an arrest a 'legal'
issue?

Rump, you are wrong. Global warming is a hoax, perpetrated by people like the High Priest of hypocrisy, Al Gore in order to increase the size and scope of the government. Even your own British Courts have demonstrated the "Inconvenient Truth" that Gore's movie essentially fictional political propaganda.

There always have been, and always will be fluctuations in the Earth's temperature, and they are not caused by man.

It was not so long ago that environmental alarmists were feigning concern over a global ice age. It is all nonsensical hysteria.

What's a "non-legal" issue?....wouldn't all arrests be a result of being accused of doing something "non-legal." I'm not being a smartass...i just want to know b/c I have an answer.

OK, who is the attorney who got the felony DUI?

I hate being teased.

We are going to find out sooner or later.

DUI is a crime but, many who commit DUI crimes are wonderful people who just made a big mistake and get caught or get very unlucky and someone gets hurt or killed. Who amoung us does not make big mistakes every now and then?

Who ever it is, I wish him or her well.

thanks to Broward Blog for the tip ...

Ranck's comments don't surprise me at all. They reflect the kind of man that he is. Ranck is a good guy who apparently allowed the charged atmosphere of a difficult case get the better of him.

Hang in the Ranck. Those of us who have known you for a long time know you to be honest, caring and decent.

I think the one who may be hurt more is the next victim of that defendant.