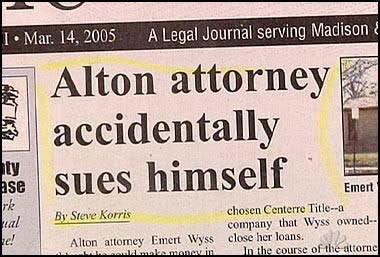 This will cause you some misery, if you were stupid enough to do this:
Misery indeed.
What they are calling "Black Thursday" for lawyers, with over 700 lawyers and a thousand support staff being laid off at big firms, is detailed here at Above The Law in a series of posts.  Holland and Knight leads the pack with 70 lawyers and 173 support staff getting the axe.
Miami is Miserable?
Forbes Magazine (motto: "We used to report on money when anyone had some") has ranked Miami, our fair city, the 9th most miserable city to live in, in the US.  And to add insult to injury, we are snugly nestled in between Buffalo, NY, and  St. Louis, MO.
Buffalo??? Oh the ignominy of it all.
FEAR?
If you suffer from TRISCADECAPHOBIA then perhaps you should stay home today. For those of you who failed remedial English, or wear a black robe to work, click on the word for a definition.
THE WAR ON DRUGS.
The Latin American Commission on Drugs and Democracy has reported that, steady yourselves, the US war on drugs in Latin America has been a failure.  They have also hastened to point out that the sky in fact is blue.  As our friends from Minnesota would say, "Tell us something we don't know, why doncha?
The report is detailed here in the WSJ.
Someday historians are going to look back on the war on drugs over the last twenty to thirty years and total up the lost lives, the money spent, the lives wasted in warehouse incarceration, and their going to shake their heads in sad wonderment.
HELP WANTED.
Secretary. Of Commerce.  Top candidate will have superior organizational skills. people skills, management skills, political skills, and should  have paid most of their taxes most of the time. Must re-locate to Washington, DC. Salary set by law.  Apply Here.
WEEKEND.
There's not a damned thing to watch on TV this weekend. I guess we'll have to ride our bike over to Key Biscayne.
Courts are closed on Monday in observance of the election of Joel Brown as chief judge, and that means one of those troublesome Tuesdays, with long lines, short tempers, and an over crowded courthouse. Any ideas on what kind of problems CJ Brown could address? Any ideas whatsoever?
See you Tuesday.
Posted by Rumpole at 6:10 AM
Email ThisBlogThis!Share to TwitterShare to FacebookShare to Pinterest

Enjoy the new improved bike lane signage, Rumpole. From your bike-riding unselected juror e-mail correspondent friend. P.S. Did you see NV DOC moved O.J. Simpson out to the middle of nowhere, not too far from your place in the Sierras?

Isn't Judge Joel Brown one of the TV judges?

Rumpole. I must pretest. Your post I am a Judge. You make fun of us but you have no idea how you post say things that are wrong. We work hard. We are no stupid but you make us out to be you stupid. There. I said it.

Can I call the Shumie now and just not go to work and make it a 4 day holiday?

Very scary - Rumpole knoocks on Buffalo last night and a few hours later a plane crashes in Buffalo killing all aboard and one on the ground.

It was the nation's first fatal crash of a commercial airliner in 2 1/2 years.

If you were among law firm associates or legal staffers who still had a job by the end of Thursday, consider yourself lucky. Six prominent firms sent packing more than 700 attorneys and legal staffers, in what may well become known as Black Thursday in the legal industry. DLA Piper; Holland & Knight; Goodwin Procter; Bryan Cave; Epstein Becker & Green; and Dechert all confirmed layoffs on Thursday, adding to what has become a brutal contraction of legal jobs.

RUMP!!! You simply cannot let someone, even a fake chief judge, call the shumie before the work of the day has even begun. We got enough bad publicity on our hands with this "The Dark Side of Shumie Time" coming out in Vanity Fair in April. This is too much. Please help out a shumie in the future.

Blawg: Some prick thought it would be clever to spell "blog" phonetically using the word "law" in the title. It's a phrase used to describe blogs primarily dealing with the law and legal issues. Wow, real clever, dipshit. How did you come up with that one?

Are you kidding me? We get a new pope and the court's shut down. Holy $%#@ Batman!

I see the Marlins deal is in jeopardy:

bill mathewman is a dead ringer for rod blagojevich

Our sorrow is deep for our colleagues fired en masse
But do keep in mind that this too shall pass
We share in your pain, your shame, your dismay
On this darkest of dark, this Black Thursday

What can Brown do for you???

Just as the Trialmaster predicted, gator joel brown is the new CJ. Filling the big shoes of Farina, Weathbird and the Great Late Judge, Edward Cowart.

The blog must be written by some short bus rider. Get a life will you.

Perhaps if the law firms weren't paying six figure salaries to people fresh out of law school they wouldn't be firing so many folks.